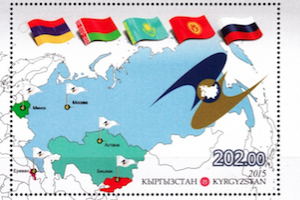 BACKGROUND: The goal of the Eurasianism Doctrine, which is one of the strongest Russian geopolitical schools formed in the 1920s, is to establish a special historical and cultural role for Russia in Eurasia.  Public interest towards this theory increased in Russia while its essential modernization took place in the 1990s when, after the collapse of the Soviet Union, Russia was seeking an imperial and integrating doctrine which would serve its purposes.

According to the economic model of Eurasianism, the market principle does not undermine “ideocracy” or the basis for ideological fundamentals to dominate public and political life.  For Eurasianists, the market and private ownership belong to a pragmatically allowable and pragmatically useful realm based on which instead of a “market economy,” they recognize “society with a market.”  Consequently, the objective of the Eurasianism economy is to maintain and develop all economic systems reflecting the cultural and historical path of the peoples living in the states of Eurasia.  Eurasianists prefer the “principle of possession” over the “principle of ownership.”  In the first case, the proprietor is to abide by his social responsibilities and be oriented on the welfare goals of society meaning that he is accountable to society and the state.  Additionally, the state is to facilitate national production and carry out a paternalistic policy applying mechanisms of tariff and non-tariff protectionism in parallel.

It is difficult to envisage how the economic model of Eurasianism can actually be implemented in a country given the modern processes of globalization ongoing world-wide.

According to Eurasianists, the Eurasian economic community, based on the above discussed principles, will establish a so-called “fourth zone” which will essentially differ from other gigantic economic zones – such as America, Europe and the Pacific – but will also oppose them.

It is noteworthy that considering the characteristics of the economic model of  Eurasianism (such as, for instance, “society with the market,” state ownership, the guarantee to achieve the welfare goals of society), the economy of Belarus is the closest to these characteristics, considering the governance regime in the country, while in Armenia and Kazakhstan, especially, and at the beginning of the post-Soviet era in Kyrgyzstan and Russia, as well, market reforms were carried out with more or less success.

The main goal of the EAEU at this stage is to deepen the trade and economic integration of its member countries, which is not even theoretically linked in any way with the economic model of Eurasianism.

A key economic motif which facilitates the integration process of the EAEU is the existence of a redistributive mechanism of revenues from oil and gas.  Specifically, within the EAEU no export duty is imposed, as a result of which the price of a given resource is reduced by the amount of the export duty as compared with that of the resource on the world market and, thus, the domestic production is indirectly subsidized.  Export duties are collected when commodities leave the borders of the EAEU, resulting in the redistribution of some of the revenues to be received by Russia – to the benefit of other member countries.  As oil and gas comprise a main export product for Russia, it is the redistribution of the revenues received from these commodities which is a key economic motive for integration.

Although the scheme on which the EAEU is based is not economically profitable for Russia, it is a scheme which secures the gradual reanimation of the Soviet Union in its modernized form which is the imperial ambition of Moscow.

IMPLICATIONS:  Starting as early as 2011, Russia has been considering the possibility of concluding agreements on Free Economic Zones (FEZ) with certain countries (such as, for instance, New Zealand, Vietnam, Israel, India and the USA) and with regional unions (such as, for instance, with the ASEAN, EFTA and the EU).  On May 29, 2015 such an agreement was signed with Vietnam, while negotiations with other countries and regional unions have been suspended or not even started, owing to political reasons.

According to the economic forecasts of Russian economists (they covered the three founding members of the EAEU which are Belarus, Kazakhstan and Russia), if FEZ agreements are concluded, both in the short and long terms, the EAEU as a whole, Russia and Kazakhstan will benefit economically from these agreements, while Belarus will not benefit if the other party to a FEZ agreement is an economically developed country.  Armenia and Kyrgyzstan are most likely to be in the same situation as Belarus.  Considering that all members of the EAEU have the veto power, in the case of the concluding of a FEZ agreement, in order to prevent Belarus (and any other member country in the same situation) from exercising its veto power, it is necessary to develop a redistribution mechanism benefiting Belarus (and similar member countries).

As Russia annexed Crimea and because of the armed conflict in Eastern Ukraine, the USA, which was subsequently joined by other countries, imposed economic sanctions against Russia as of the spring of 2014. This was a new challenge for the EAEU, as the sanctions do not apply to its other member states.

As of August 2014, Moscow imposed so-called anti-sanctions, thereby anti-ing the existing sanctions against Russia and banning the import of food products from the USA, the EU, Australia, Norway and Canada.

The now one-year experience of the anti-sanctions shows that it is Russia that incurs losses.

It is straightforward that the existing situation absolutely opposes the principle of the common customs territory of the EAEU.  In effect, this territory is divided into two areas:  that of Russia and that of the other EAEU member countries.

The probability that the other member countries of the EAEU will voluntarily join Moscow in its anti-sanctions is low since this would be economically unsuitable for these countries.  If Moscow applies any mechanism to influence these countries, this will further undermine the already vulnerable foundations of the EAEU and raise questions about its future.

Additionally, it is notable that if Moscow should use any form of influence against the member countries, this will scare away others which are not yet members and which may be considered by Moscow in its prospective plans as potential new members of the EAEU.

Because of its political ambitions, it can be said that it is almost guaranteed that Moscow will not say no to anti-sanctions until the sanctions imposed against Russia are abolished.

Thus, it is now less likely that the existing system of “sanctions and anti-sanctions” will be changed at the expense of any compromise made by Moscow.

CONCLUSION: It can be stated that it is utopian that the economic model of Eurasianism can be realized in the modern global world, while the economic model of the EAEU is not only unstable, but also inadequate, which has become most apparent as a result of the sanctions imposed against Russia and the anti-sanctions introduced by Moscow.

AUTHOR’S BIO: Vladimer Papava is Professor of Economics, Ivane Javakhishvili Tbilisi State University, a Senior Associate Fellow of the Central Asia-Caucasus Institute & Silk Road Studies Program Joint Center, and author of Necroeconomics, a study of post-Communist economic problems.  He was a Minister of Economy of the Republic of Georgia (1994-2000), and a Member of the Parliament (2004-2008).

More in this category: « The battle for Kunduz and its repercussions The ISIS threat and Moscow's influence in Central Asia and the Middle East »
back to top