Uzbekistan’s foreign policy can roughly be divided into two periods, corresponding to its two Presidents, Islam Karimov and Shavkat Mirziyoyev. Despite Karimov’s slogan “Turkistan is our common home,” indicating an embrace of the wider region, territorial and water disputes in Central Asia overshadowed intra-regional affairs. Since Mirziyoyev came to power, Uzbekistan has taken dramatic steps to overcome such regional discord, instead emerging as a leader in building cooperation both on the region-wide level and through the budding alliance with Kazakhstan. Meanwhile, Tashkent’s regional and international behavior has sometimes been quite cautious and hesitant, particularly as relates to great powers surrounding Central Asia. The question going forward, in particular against the background of Russia’s war in Ukraine, is whether this approach verging on neutrality is sustainable, and whether Uzbekistan must emerge more assertively on the regional scene. 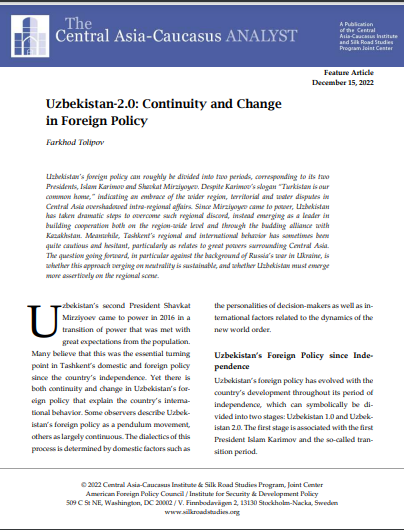 More in this category: « Israel’s Role in the Second Armenia-Azerbaijan War and Its Implications for the Future Turkmenistan Lifts Its Head »
back to top