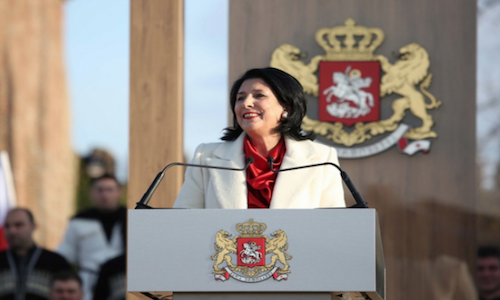 BACKGROUND: Similarly to campaigning before the 2016 parliamentary elections, this year's election campaign was extremely harsh and divisive. It revealed a deep polarization in the society and media over the irreconcilable political competition between GD and its major political opponent, the UNM. Both parties resorted to negative and highly polarizing campaigning to attract votes and focused their campaigns on personalities rather than on programs. The election campaign was replete with black PR, leaked audiotapes, allegations of corruption and murder – all aiming to discredit the opponent and appealing to the most extreme emotions rather than promoting the candidates. The smear campaign completely overshadowed the debate about the important economic and policy concerns that Georgia is currently facing. While this strategy is convenient for political parties, it is unhelpful to voters and turn elections into emotion-fueled plebiscites rather than an actual competition based on programs.

The negative campaigning intensified after the first round when the major opponents scored almost identical numbers of votes. Zurabishvili was able to garner 615,572 votes – nearly a quarter of a million less than the ruling party received in the last parliamentary elections. The major opposition candidate, the UNM’s Vashadze, came a close second and received 601,224 votes, which exceeded the UNM’s result in the last parliamentary elections. This result came as a surprise to the ruling party, which was convinced that the fragmented and weakened opposition would not pose a substantial challenge. This contributed to even fiercer and more polarizing campaigning by the two major opponents before the run-off. The ruling party engaged in a new black PR campaign aimed at their main political opponent, including new billboards and videos. The UNM responded with negative coverage in friendly media outlets.

Most observers noted that the elections were not fair and that the authorities resorted to undemocratic methods to attract voters. The most notable case took place just before the second round, when Prime Minister Mamuka Bakhtadze promised that the state is ready to help Georgians who are unable to pay off their bank loans. The total number of people who are behind on their debt payments is estimated to 700,000, and the combined value of toxic debts amounts to 1.5 billion lari (approximately US$ 564 million). Debt relief would come through the Kartu Foundation, established by GD’s founder, Bidzina Ivanishvili. This unexpected move sparked accusations in Georgia and beyond that the ruling party employed vote buying to gain an unfair advantage over the opposition candidate.

IMPLICATIONS: The November presidential elections were the last occasion when Georgia’s head of state was elected through direct balloting. In line with recently adopted constitutional changes, starting from 2024, the president will be elected indirectly by an Electoral College. The president’s prerogatives will also be limited especially in the field of foreign policy, where the presidential role will be mostly representative.

After the first round of elections, only three of the 25 registered candidates were able to gather more than 10 percent of the vote – Zurabishvili, Vashadze and Davit Bakradze of European Georgia. The two major candidates, Zurabishvili and Vashadze, received 38.64 percent and 37.74 percent respectively and were unable to cross the 50 percent threshold to win the elections. Thus, for the first time in Georgia's history, the president was not elected in the first round. The elections revealed a deep polarization of the electorate, which was exacerbated by the fierce competition between the ruling party and its major opponent.

The fact that the opposition candidate was able to score an almost equal number of votes to the candidate endorsed by the ruling party provided a new boost of hope for UNM. After the 2016 parliamentary elections, when UNM suffered a serious failure and a subsequent split within its ranks, the party seemed to be slipping into irrelevance. Yet the party’s presidential candidate was able to attract a substantially higher number of votes and gained support not only from traditional UNM voters but also from thousands of undecided ones. However, at the end of the day, the opposition proved unable to break the glass ceiling: Vashadze lost the presidential race to Zurabishvili receiving 40.5 percent of the vote to her 59.52 percent.

Like her opponent, Zurabishvili has substantial foreign policy experience, having served as France’s ambassador to Tbilisi as well as Georgia’s foreign minister. It is unlikely that foreign policy under the new president-elect will differ from that of Georgian Dream. In her first post-election address, Zurabishvili confirmed Georgia’s decisive course towards integration with NATO and the EU. She also criticized Russia’s continually aggressive and provocative behavior toward Georgia.

Turnout in the second round was 56.2 percent, compared to 47.8 percent in the first round. This was most likely a result of voter mobilization following the very harsh and polarizing campaigning and the undue advantage provided by government support for the GD-backed candidate just before the second round. Many voters also likely feared that Vashadze would implement former President Mikheil Saakashvili’s agenda and pardon not only the former president but also other UNM politicians who were sentenced in the last few years.

The elections revealed that even though many Georgians are growing tired of GD’s rule, the opposition is incapable of successfully capitalizing on the ruling party’s mistakes in order to regain power. The largest opposition party, UNM, used largely the same tactics that resulted in a crushing defeat in the last parliamentary elections. This strategy has generally proved unsuccessful, even though many Georgians are dissatisfied with the ruling party and its seeming inability to tackle the country’s mounting economic and policy problems.

Over the last few years, Georgia has been hit hard by an economic slow-down caused by a decline in exports and a rapid depreciation of the national currency. Also, concerns have grown over increasing corruption, a lack of transparent governance and the limited independence of the judiciary. However, the UNM’s controversial proposals, for example dissolving the parliament and holding early elections or the promise to pardon Saakashvili ultimately put off many voters. Ultimately, Georgians opted for stability over the uncertain and potentially disruptive changes put forward by the opposition. Subsequent calls for civil disobedience and accusations against GD of rigging the elections did not attract much attention; even some opposition politicians declined to support them. With their revolutionary political ideas, UNM seems unable to convince many undecided constituents, whose support is crucial to challenge GD.

CONCLUSIONS: It seems that highly polarizing, negative election campaigns will not disappear from Georgia's political life anytime soon. Manufactured conflict produces political benefits for the main opponents and parties will not abandon this strategy. It allows the ruling party to distract attention from the problems that the country is currently facing and helps to mobilize votes against the demonized opposition. In turn, negative campaigning helps UNM to stay relevant and win part of the undecided voters who are dissatisfied with GD rule. Despite GD’s victory, the presidential elections showed that the ruling party’s appeal, which capitalized on UNM's unpopularity and has been winning elections by a wide margin since 2012, is fading. GD had to resort to dubious tactics to retain political power even when facing a weakened and fragmented opposition. The upcoming parliamentary elections will be an even bigger challenge for the ruling party, since GD will have to fight to preserve its parliamentary majority for the third consecutive term. Georgian authorities face an important task in improving electoral standards and ensuring an eventual peaceful transfer of power.

More in this category: « Land Swap With Chechnya Causes Mass Protests in Ingushetia Kazakhstan as an Arctic State and a Maritime Power »
back to top