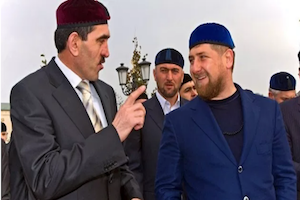 BACKGROUND: After the de facto dissolution of the Chechen-Ingush Autonomous province in the early 1990s, the administrative border between both entities has not been properly delineated. Thus, there has been an objective need to demarcate the border between two ethno-linguistically similar populations. Yet, Chechnya’s strongman Kadyrov is notorious for his attempts to “enlarge” Chechnya by expanding westward (to Ingushetia, Sunzhensky District) and eastward (to Dagestan, the Aukh/Novolaksky district) which, according to him and Chechen historians, are ancient Chechen lands. Importantly, the 1999 invasion of Dagestani-Chechen jihadists into western Dagestan was interpreted by some Dagestanis as part of the Chechens’ grand plan to annex Dagestani territory. This has sparked conflicts with the neighboring ethnic groups, further boosted by Kadyrov’s accusations voiced about a decade ago that Chechen jihadists had taken advantage of a flabby approach by Ingush and Dagestani authorities on the contested borderland. Kadyrov has also implicitly laid claim to the Ingush legacy – the picturesque, wooded and mountainous Sunzhen district with ancient towers that Kadyrov has often presented as Chechen.

Against this backdrop, without any public discussion, an agreement was signed between Kadyrov Yevkurov on the demarcation of the border between the republics, with Ingushetia yielding the Sunzhensky district to Chechnya and Chechnya yielding parts of the flat and agricultural Nadterechny district to Ingushetia. The agreement was ratified by the Chechen parliament. However, its signing in the Ingush parliament was fraught with controversy: pro-regime media first announced that it passed, which was then challenged by Ingush parliamentarians. Almost certainly, the agreement was not legally adopted, and authorities had to forge the outcome.

This mobilized thousands of Ingush, who took to the streets in front of the Ingush parliament in the capital Magas. Several teips or clans expressed their concern over the agreement and their unwillingness to give up their ancestral lands to Chechnya. Ingush OMON were deployed to Magas, blocking the roads to the parliament in an attempt to halt the popular uprising, with some OMON firing warning shots to calm the protestors. Rosgvardia (National Guard) troops deployed to Ingushetia from other parts of the North Caucasus were reportedly blocked by Ingush OMON from entering the capital, with some OMON taking the side of the protesters or expressing support for them.

Dozens of Ingush have traveled from parts of Russia to Magas to stand with their co-ethnics in what appears to be an all-Ingush expression of discontent. Regime-backed attacks against some high-profile protestors, e.g. human rights defenders, have also worsened the image of the authorities among the masses. Heated nationalist-laden debates have played out in social media between the brotherly Chechens and Ingush, although some have put the blame exclusively on the Chechen and Ingush authorities and their “secretive” deal. Some Ingush intellectuals have expressed doubt that parts of Chechnya will indeed be handed over to Ingushetia despite Kadyrov’s claims to keep all Chechen lands under his control. The heated standoff has been further aggravated by Kadyrov’s implicit threats, made in the Chechen language on Chechen TV, that if needed, the Chechens would go to war (against the Ingush).

IMPLICATIONS: This is the first outbreak of popular discontent in the North Caucasus in a long time. Since Moscow has cultivated an allergic attitude toward manifestations of “Maidan” within its realm, the protesters’ increasingly frequent calls for Yevkurov’s resignation could create a dangerous standoff. From Moscow’s and Magas’s perspective, this standoff is made even worse by the fact that significant numbers of Ingush OMON are siding with the protestors – and remain determined to prevent non-Ingush troops from entering the capital or the republic. Should the Ingush military persist in its efforts to disallow outsiders to “restore constitutional order” in Ingushetia, this would send a bold message to other parts of Russia, setting a precedent that is seen as malignant in Moscow.

The locals may force Yevkurov to resign, which is also damaging to Moscow. If the outsider troops do break the opposition of the Ingush OMON, this would most likely cause bloodshed, with locals mobilizing to help their troops in this highly socially-conservative part of Russia with a population of 300,000. An invasion of Chechen OMON into Ingushetia would further exacerbate the situation, with a prospective fratricidal conflict destabilizing the region. The situation in Ingushetia, with its relative liberty and the existence of strong opposition forces and media, is the extreme opposite of Chechnya where no dissent has survived and signs of public discontent are severely punished by the Kadyrov regime. To save face and mitigate discontent, Ingush authorities would have to back away from the agreement, a prospect unacceptable to Kadyrov with his closely guarded reputation of a strongman. A stalemate could thus emerge in Ingushetia with far-reaching consequences extending to the borders of this tiny Northeast Caucasian republic.

The entire land swap issue is further complicated by Kadyrov’s frequent interference in Ingush domestic politics. The well-publicized ongoing standoff between Yevkurov and the head of Ingush Muftiate, Isa Khamkoev, has been continuously fueled by Kadyrov’s open backing of the Muftiate, which the Chechen leader sees as an extension of the Chechen Muftiate. Prior to the September 9 elections in Ingushetia, Kadyrov openly endorsed the head of the Muftiate against Yevkurov. Kadyrov also has a history of criticizing Yevkurov for his efforts to initiate dialogue with Ingush Salafis and even to participate in peace talks with Islamist militants in the republic. Kadyrov has interpreted these efforts as signs of Yevkurov’s weakness and inability to take full control of the situation in the republic.

Chechen authorities perceive the current protests against Yevkurov as yet another sign of weakness. Despite Yevkurov’s recent reelection for another term in office, he has emerged as incapable of communicating his policies with the nation. By contrast, Kadyrov has received the full backing of the Chechen public on the land exchange deal. The land swap was eagerly approved not only by the Chechen elites, but also by Chechen historians and academics, some of whom are based in other regions of Russia. In an unprecedented message, the Chechen émigré Diaspora in Western Europe rendered their support for Kadyrov’s actions. This is indeed the first time that the Chechen Diaspora – primarily consisting of anti-Kadyrov asylum seekers – has openly endorsed Kadyrov’s policies. The key argument of the Chechen side rests upon the assumption that the current land swap was first agreed by the late Chechen leader Dzokhar Dudayev and former Ingush president Ruslan Aushev in the early 1990s.

CONCLUSIONS: Since Ingush protesters in Magas appear unwilling to give in, the land swap question will likely put Yevkurov’s leadership to a serious test. The fact that federal authorities prohibited dispersing the protesters and President Putin personally stated that force should not be used against protesters emphasizes the complexity of the situation. Although Yevkurov continually employs all possible approaches to achieve compromise with the protesters – including using elders as intermediaries – it becomes obvious that he will have to make concessions in order to retain his job. Yevkurov’s bitter conflict with the republic’s clergy makes matters even worse, as the head of Ingushetia is unable to rely on religious leaders to negotiate with largely Sufi protesters.

Emil A. Souleimanov is Associate Professor at the Department of Security Studies, Institute of Political Studies, Faculty of Social Sciences, Charles University. His recent publications include Iran’s Azerbaijan Question in Evolution: Identity, Society, and Regional Security.

More in this category: « Afghanistan and Pakistan Clash Over Border Fence Georgia's Last Direct Presidential Elections »
back to top