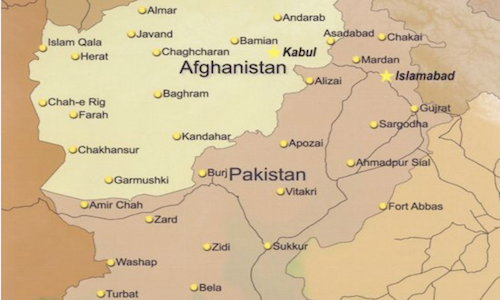 BACKGROUND: The roughly 2,640-kilometer-long Durand Line which separates Pakistan from Afghanistan is a legacy of British colonial rule. Since 1947, successive Afghan governments have rejected the Durand Line as the International Border, arguing that it was imposed on Afghan rulers by the colonial government. While the border has roiled bilateral relations for decades, it was when Pakistan began fencing the border in April 2007 that the dispute got a new lease of life.

The Durand Line runs through Pashtun towns and villages and essentially divides a community with a shared language, religion and cultural traditions. Pashtuns living on the Pakistani side of the Durand Line have kinship and economic ties with those across the border. They have crossed the border with ease in the past as it is irrelevant to them. The Durand Line runs through regions where the writ of the two governments barely runs and over the decades, armed insurgents, narcotics and weapons have flowed across with ease. This worsened with the U.S. arming and training Afghan mujahideen in Pakistan and sending them into Afghanistan to fight the Soviets.

With the fall of the Taliban regime in 2001, the leaders and the fighters crossed the border and took sanctuary on the Pakistani side and have since then waged their war from Pakistan against the U.S.-led troops and the Afghan government. Likewise, anti-Pakistan militant groups like the Tehreek-e-Taliban Pakistan have taken sanctuary on the Afghan side of the border.

In 2006, Pakistan’s President General Pervez Musharraf proposed fencing the border to prevent militants, narcotics and gun runners from slipping between the two countries. Work on the fence began in 2007 and has since then progressed in fits and starts. Since 2017, work is said to have gathered momentum. The fence consists of a pair of 3-meter chain link fences, with a 2-meter gap topped with coils of sharp concertina wire. Watchtowers have been built too. Given its high cost, the fence is being erected only in areas where crossings are high.

IMPLICATIONS: All Afghan governments and parties, including the Taliban, which are close to Pakistan, perceive the Durand Line as a colonial imposition and hence unacceptable to them. They perceive Pakistan’s construction of the fence as an attempt to permanent a boundary that benefits Pakistan and is unacceptable to Afghanistan. Pashtun and Baluch nationalists see the fence as an affront to their nationhood and are strongly opposed to it. The Pashtun and Baluch nations, which were torn apart by the Durand Line during colonial rule, are being kept permanently divided by Pakistan’s border fence, drawing attention to the fence’s division of families and villages.

Afghanistan rejects Pakistan’s claims that the fence will prevent militants and smugglers from slipping across. The experience of India, which has constructed fences along its international border with Pakistan and the Line of Control in Kashmir to tackle Pakistan’s infiltration of militants into India, is instructive in this regard.

The Indian fence, like the one being constructed by the Pakistanis, runs through rugged terrain and during winter avalanches have brought down these structures. Repair and maintenance is required and this entails regular funding.

Despite the fencing of the LoC, hundreds of militants are able to slip into India each year from Pakistan and Pakistan Occupied Kashmir. If blocked by the fence, they simply dig underground tunnels to enter India. Indeed, no fence is strong enough to keep out a determined militant, especially one who has the support of security forces and intelligence agencies which are sending them across the border. Typically militants entering India from Pakistan are helped by handlers in the Inter-Services Intelligence (ISI), Pakistan’s external intelligence agency. To distract the Indian forces patrolling the border, Pakistani troops fire at Indian border posts, enabling militants to slip into Indian territory. Pakistan has opposed the Indian fence.

Thus, so long as the Pakistani state supports the Taliban and the Haqqani Network, fighters and leaders of these groups will be able to cross the Durand Line with ease whether or not there is a fence. Afghanistan is therefore right. The security fence will likely be largely ineffective in dealing with cross-border movement of militants and criminals.

There are border crossing points along the Durand Line as well. These are to allow “legal crossing” by ordinary civilians on either side of the border to cross over to the other side if they wish to. While militants typically have the financial resources to procure fake papers or bribe border guards to cross over, ordinary civilians often lack the contacts or the money to bribe their way across to the other side.

Building security fences and barriers make governments look like they are taking robust steps to keep the country and its people safe. It is likely that Pakistan expects its fence and mining of the surrounding areas to impress the international community that it is committed to fighting terrorists.

At best the fence can slow the flow of militants but it cannot stop it, especially if there is state support for that flow into another country.

CONCLUSIONS: Afghan-Pakistani relations are already tense and Pakistan’s unilateral fencing of the Durand Line is worsening this strained relationship. Clashes between their security forces are growing in frequency and intensity. This would encourage the two governments to support terror outfits targeting the other. Far from reducing militant attacks, the fence could fuel terrorist activities in the region.

More in this category: « Bolton's Caucasian Tour and Russia's Reaction Land Swap With Chechnya Causes Mass Protests in Ingushetia »
back to top