Political Crisis is Looming in Ingushetia

On May 27, Ingushetia’s Muftiate (The Muslim Spiritual Center of Ingushetia) excommunicated Yunus-bek Yevkurov, head of the autonomous republic in Russia’s North Caucasus. According to the head of the Muftiate, Isa Khamkhoev, the excommunication implies that Yevkurov is no longer a Muslim and is not allowed to participate in wedding and funeral ceremonies or other Muslim events in the republic. The Muftiate motivated its decision with Yevkurov’s persecution of the religious community, the illegal use of administrative resources to lobby against the Muftiate, and the use of security forces to seize land allocated for a mosque in the capital city Magas. Notwithstanding the excommunication, Yevkurov was reelected as the head of republic in the September 9 local elections. 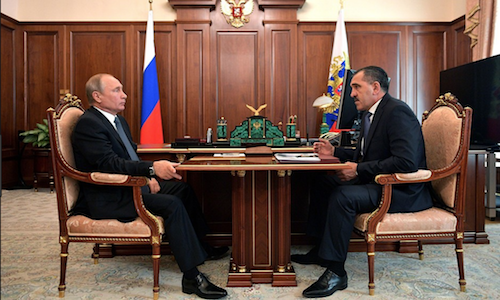 BACKGROUND: Russia’s then President Dmitry Medvedev appointed Yevkurov head of Ingushetia in 2008. In the 2000s, an Islamist insurgency spreading from neighboring Chechnya and Dagestan ravaged the tiny mountainous republic. Yevkurov’s military background and connections in the Kremlin made him a suitable candidate for restoring Moscow’s control over the restive republic. Unlike Chechnya’s Ramzan Kadyrov, who exclusively practiced heavy-handed repression, Yevkurov combined counterinsurgency with dialogue. Keen to distinguish between peaceful Salafis and Islamist insurgents, Yevkurov worked towards legalizing Salafi mosques and merging them with official Muftiate-controlled Sufi communities.

This policy appeared to effectively undermine support for the insurgency amongst peaceful Salafi communities, but put Yevkurov on a collision course with Khamkhoev, the leader of the Muslim community. In 2009, Khamkhoev launched a campaign to elect a new head of the republic, while Yevkurov was hospitalized after a failed assassination attempt by Islamists. The conflict intensified after mutual accusations led Yevkurov to close a religious radio station, as well as force mosque authorities to video record all religious sermons. In 2016, Yevkurov attempted to abolish the Muftiate and Russia’s Ministry of Justice had to mediate a “peace treaty” to enable dialogue between Yevkurov and the religious community in 2017. However, the peace lasted less than a year as both sides re-engaged in the power struggle.

IMPLICATIONS: Yevkurov maintains that the Muftiate decided to excommunicate him in anticipation of the September 9 elections. As previously, Khamkhoev engaged in active campaigning against Yevkurov’s candidacy for re-election, accusing him of rampant corruption and disrespect for Ingush traditions enshrined in the Sufi current of Islam. The decision to excommunicate Yevkurov was taken during the holy month of Ramadan, implying that the Muftiate sought to alienate the majority of Sufi worshippers from Yevkurov. Although there is no active political opposition to Yevkurov, there are several influential businessmen who support the Muftiate, and the religious community was seeking to promote them as alternative candidates. Despite the Muftiate’s efforts, Yevkurov was reelected.

Nevertheless, the Ingush Muftiate has found an active supporter in Chechnya’s Kadyrov, who openly supports Khamkhoev against Yevkurov. Since the Chechen and Ingush Muftiates belong to the same Sufi current of Islam, the two religious communities maintain close connections. This has enabled Kadyrov – who exercises absolute control over Chechnya’s religious community – to interfere in the neighboring republic’s politics. Kadyrov has frequently accused Yevkurov of being “too soft” on Islamists and would certainly like to see him removed from his post. From Kadyrov’s point of view, Yevkurov’s efforts to create a dialogue with Salafis and allowing them to build Salafi mosques creates a dangerous precedent for the region. The Chechen leader has built his career on ruthless persecution of Salafis and strong support for Sufi sects, and any effort to strengthen Salafi communities or offer them similar rights as those awarded to Sufis would undermine Kadyrov’s position in Chechnya. Kadyrov’s interest in supporting Ingush clerics also stems from his aspiration to present himself as a leader of all Russia’s Muslims. To achieve these ambitions, Kadyrov is seeking to gather as much local support as possible to challenge the Spiritual Council of Russia’s Muslims.

Since the start of the excommunication scandal, the Kremlin has been persistently silent. Moscow is satisfied with Yevkurov’s service and wants to keep him as the head of republic. Yevkurov is a member of the siloviki (Power Ministries) and a loyal supporter of Putin. The Kremlin also wants to limit Kadyrov’s influence in the region and to avoid the appointment of someone loyal to him as head of Ingushetia.

Since Putin’s return to the presidency in 2012, Russia’s governance strategy in the North Caucasus has been to prevent one regional leader from achieving a dominant position over the other federal subjects. Yevkurov’s conflict with the local Muslim community undermines his image and popularity in Ingushetia, which is of some concern for Moscow. However, as demonstrated by the recent government reshuffles in Dagestan, the Kremlin prefers loyal, dependent and relatively weak leaders to govern the North Caucasus. The ongoing conflict with the Muftiate ensures that Yevkurov will be unable to strengthen his rule and distance himself from the Kremlin in a manner similar to Kadyrov.

Given that the Muftiate, unlike Yevkurov, has no direct communication with the Kremlin, Moscow perceives the current conflict as an effort to influence its choice of a candidate for election. Despite the formal elections, the candidate for the head of republic still has to be endorsed by Moscow, which has thus far prevented any undesirable candidates from entering the elections in the autonomous republics of the North Caucasus.

Indeed, on July 24 the ruling United Russia party officially requested President Putin’s endorsement of Yevkurov’s candidacy for the September 2018 elections. The Russian President endorsed Yevkurov, by the same token as an earlier successful request to Putin from United Russia to endorse the incumbent head of Dagestan, Vladimir Vasilyev.

CONCLUSIONS: With tacit support from the Kremlin, Yevkurov is expected to prevail in the conflict with the Ingush clergy, regardless of the Chechen support for the Muftiate.  Yevkurov will continue to use his position as the head of republic to weaken the Muftiate and possibly abolish it. Yevkurov’s reelection in September grants him five more years in office to undermine the Muftiate and to replace it with a more accountable and loyal religious institution. However, the conflict between the head of Ingushetia and its highest religious authority will likely create divisions among followers of the traditional state-supported Sufi branch of Islam, which could draw more disaffected Sufi believers into the camps of Salafi followers. Yevkurov’s ability to balance between the Sufi majority and Salafi minority throughout his previous terms in office will likely come under test after his reelection, as he will face the unpleasant reality of either reconciling with the rebellious Muftiate or destroying it, perhaps at the expense of allocating more power to Salafis.

Huseyn Aliyev is a LKAS Research Fellow at the School of Social and Political Sciences, University of Glasgow. He specializes in armed conflicts, non-state armed groups, and informal practices. Huseyn is the author of “When informal institutions change. Institutional reforms and informal practices in the former Soviet Union” (University of Michigan Press, 2017). Huseyn’s most recent publications appeared in Third World Quarterly (2017), Terrorism and Political Violence (2017), Security Dialogue (2016), and International Security (2015).