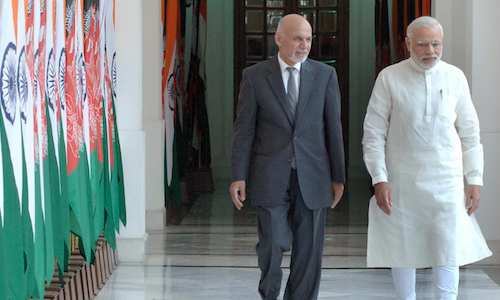 BACKGROUND: Ghani began his presidency in September 2014 by reaching out to Pakistan to secure its support for the Afghan reconciliation process. His outreach was based on the hope that Pakistan would bring the Afghan Taliban to the negotiating table and refrain from backing terrorist attacks in Afghanistan. Ghani sought to woo Pakistan by addressing its concerns over India’s expanding influence in Afghanistan; he distanced himself from India, even turning down an Indian offer to provide weapons to Afghanistan. Additionally, his government ordered military operations on the Pakistani Taliban’s hideouts in Afghanistan and despite strong opposition at home to his co-operation with Pakistan, Ghani went ahead to finalize an intelligence sharing pact between the intelligence agencies of the two countries.

However, Ghani’s attempted rapprochement with Pakistan proved a non-starter. Not only did the peace talks make little headway; violence in Afghanistan also surged sharply. Several of the major terror attacks were Pakistan-backed. What is more, Pakistani generals are said to have participated in the Taliban’s brief capture of Kunduz. A Taliban attack in Kabul on April 19 that killed 64 people and injured 300 others proved to be the last straw. In a speech to a joint session of the two houses of the Afghan parliament, the Afghan president announced a major shift in his policy. His government would no longer seek Pakistan’s support in the talks with the Taliban. “We no longer expect Islamabad to bring the Afghan Taliban to the negotiating table,” he said.

Pakistan’s obstructionist approach to Afghanistan’s efforts to expand trade with India and the rest of South Asia further dashed Ghani’s hopes that Islamabad would help stabilize Afghanistan. Pakistan allows Afghan goods overland access to India but has prevented the import of Indian goods into Afghanistan via Pakistan. This has restricted trade between India and Afghanistan as well as India’s supply of humanitarian assistance to Afghanistan.

Like Ghani, India’s Prime Minister Narendra Modi also began his term by extending an olive branch to Pakistan. He invited his Pakistani counterpart Nawaz Sharif to his inauguration in May 2014 and also visited the latter’s Lahore residence on Christmas last year ostensibly to greet him on his birthday. In addition, the Modi government revived the suspended dialogue with Pakistan and although a Pakistani hand was evident in the terrorist attack on the Indian Air Force base at Pathankot in January, it sought to downplay it. However, relations have since frayed seriously, especially after the attack at Uri. The Uri attack prompted the Modi government to launch an international diplomatic campaign to isolate Pakistan and to carry out military strikes on terror launch-pads in Pakistan-administered Kashmir. This has plunged historically troubled India-Pakistan relations to a dangerous new low.

IMPLICATIONS: As their attempts at rapprochement have failed, India and Afghanistan have toughened their approach towards Pakistan. Ghani has returned to the policy of his predecessor, Hamid Karzai, who built strong relations with India. This shift did not happen overnight; months prior to his speech announcing his loss of faith in Pakistan, Ghani reached out to India to take on the responsibility of being a key security provider in Afghanistan. He renewed the request for Indian weaponry, which he had rejected less than a year earlier.

India responded to the request by giving Afghanistan four Mi-24 attack helicopters, the first time Delhi has provided lethal military hardware to Afghanistan. Since both the U.S. and the Ghani government have shrugged off their earlier reservations over India taking on a military role in Afghanistan, and the Modi government is not averse to adopting such a role, India can be expected to supply Afghanistan with more weaponry. In August, Afghanistan’s army chief General Qadam Shah Shahim visited Delhi with a new wish list of military equipment, which was reportedly drawn up with U.S. input. The military equipment that India will supply remains under wraps.

On the question of terrorism, especially that emanating from Pakistan, the Ghani government has become increasingly strident in its criticism of Pakistan, blaming terrorist attacks on Afghan soil not just on groups linked to ISI but on the Pakistan military itself; for instance, it held the Pakistan military responsible for the attack on the Indian consulate at Mazar-e-Sharif in January. Following the attack on the Indian army camp at Uri, it not only expressed solidarity with India but also described the attack as “cross-border terrorism,” language that India uses to describe attacks by terrorist outfits based in and backed by Pakistan. The Ghani government took this show of solidarity with India further by joining it in boycotting the South Asian Association for Regional Co-operation (SAARC) summit that Islamabad was to host in November. It also supported India’s “surgical strikes” on “terrorist launch-pads” in Pakistan-administered Kashmir; the Afghan ambassador in Delhi even justified the Indian strikes as “bold action” that was carried out in “self-defense.”

Also with regard to trade, the Afghan president has turned more strident. He recently warned Pakistan that it would not be allowed to use Afghan transit routes to reach Central Asian markets if it continued to obstruct overland trade with India via the Wagah border. This new assertiveness is in part an outcome of Afghanistan’s mounting frustration with Pakistan. But after India, Iran and Afghanistan signed a trade and transit agreement via Iran’s Chabahar port, Kabul and Delhi also have an overland route that frees them of dependence on the route via Pakistan.

The growing collaboration between Kabul and Delhi has evoked an angry reaction from the Afghan Taliban, who have called on India to halt military aid to Afghanistan, describing aid to the “Kabul stooge administration” as an act of hostility to the Afghan people. Attacks on Indian projects and personnel in Afghanistan are likely. The ISI can be expected to encourage and support such attacks.

CONCLUSIONS: Undoubtedly, India and Afghanistan have much to gain from bilateral cooperation. However, they should resist the temptation to isolate Pakistan as this would only intensify the latter’s already deep insecurities. An insecure and anxious Pakistan is in nobody’s interest, especially since this would prompt the country to back violent attacks targeting Afghanistan, India and their cooperative endeavors. While India and Afghanistan should not allow Pakistan to curtail their bilateral cooperation they would do well to keep the door open for collaboration with Pakistan, however frustrating and unrewarding this may be.

More in this category: « Russia and Armenia establish joint ground forces Reasons for cautious optimism as post-election dust settles in Georgia »
back to top