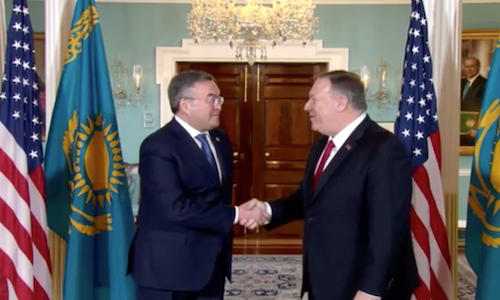 BACKROUND: Since the 1990s, the U.S. has built relations with Kazakhstan, Kyrgyzstan, Tajikistan, Turkmenistan, and Uzbekistan and has supported security, development and several economic projects in each of these countries. Since the 1990’s, the primary U.S. strategic interest in this region has been to build a stable Central Asia that contributes directly to U.S. efforts to counter terrorism, support regional stability, and promote energy security. Central Asia was a key region during Operation Enduring Freedom in Afghanistan. To accommodate the increased need for non-lethal supplies to Afghanistan after 2009, and to reduce its reliance on supply lines through Pakistan, U.S. planners opened the Northern Distribution Network (NDN), a series of commercially-based logistical arrangements connecting Baltic and Caspian ports with Afghanistan via Russia, Central Asia, and the Caucasus (Csis.or; Cacianalyst.com).

After several years of decreasing U.S. involvement in the region, the Obama administration initiated the C5+1 and launched the first U.S. strategy on Central Asia in 2015. (State.gov; State.gov).

The recent U.S.-Taliban agreement and the prospect of ending the U.S. military presence in Afghanistan has increased Washington’s focus on Central Asia. Although the Taliban has committed not to allow the use of Afghan territory for terrorist activity aimed at the U.S. in exchange for a withdrawal of U.S. forces from the country, the political turmoil in Afghanistan implies that security perspectives remain uncertain for Afghanistan, as well as for the whole region (Thediplomat.com). Intra-Afghan negotiations has been one of the biggest headaches for the U.S. (Thediplomat.com). In this context, the Central Asian states will play an increasing role in maintaining regional stability. Moreover, as President Trump has state, “If bad things happen, we’ll go back” – thus, if the Taliban fail to honor the agreement or the situation in Afghanistan would again motivate U.S. intervention, Central Asia could again be used a stepping stone.

Moreover, aside from Central Asia’s geographical position and natural resources, China’s growing involvement in the region in recent years, along with Russia’s strong political influence, has also raised Central Asia’s importance to Washington and vice versa.

IMPLICATIONS: Since 2019, visits of U.S. foreign policy officials to Central Asia have intensified (Rferl.org). In February, Pompeo visited Kazakhstan and Uzbekistan (Informburo.kz; Mfa.uz) and attended the C5+1 Ministerial. According to Uzbekistan’s Foreign Ministry, the agenda of the talks included regional security, regional cooperation, and the situation in Afghanistan (Rferl.org). During his visit to Kazakhstan, Pompeo met with ethnic Kazakhs whose family members have been detained in internment camps in the Xinjiang Uighur Autonomous Region of China (Kz.usembassy.gov). Ahead of Pompeo’s visit, China’s foreign ministry stated that “attempts to sow discord over Chinese policies in its Xinjiang region will fail” and that the regional countries were better placed to assess the situation than Washington (Reuters.com). Chinese media declared Pompeo’s visit as “simply wasting time trying to undermine China's interests there” (Chinadaily.com.cn).

Simultaneously, the U.S. State Department published the U.S. Strategy for Central Asia 2019-2025 (State.gov). The strategy retains several priorities from the previous one, raising domestic and cross-border terrorism as a primary security concern. “Reducing terrorist threats” and problems related to Afghanistan are emphasized as key policy objectives in the strategy. Amid the U.S.-Taliban agreement and the planned U.S. withdrawal from Afghanistan, it becomes logical for the U.S. to ramp up its security assistance for the Central Asian republics. According to the agreement, the U.S. “is committed to withdraw from Afghanistan all military forces of the United States, its allies, and Coalition partners, including all non-diplomatic civilian personnel, private security contractors, trainers, advisors, and supporting services personnel within 14 months following announcement” of the agreement. (State.gov)

Washington’s main goal is seemingly to increase security cooperation with the Central Asian states in order to enhance their ability to respond to current and future challenges affecting regional stability. After the planned U.S. withdrawal from Afghanistan, threats involving the penetration of radical groups into the region or the growth of such groups within Central Asia are quite realistic perspectives. Moreover, the U.S. withdrawal would leave Russia and China as the only security providers in the region, which is not a desirable scenario for Washington. Thus, developments in Afghanistan along with the globally increasing cooperation between China and Russia are the main drivers of the U.S. re-engagement in Central Asia.

According to the Kommersant’s sources in the Russian government, Moscow considers the U.S. strategy as a plan aiming to draw the Central Asian states away from Russia and China and involving them in U.S.-sponsored regional security and energy projects – primarily in the Afghan direction. Moreover, before Pompeo’s visit, Russia’s Foreign Minister Sergei Lavrov negatively assessed U.S. activities in the region, saying that their true goal is “to deploy all projects with Central Asia’s participation in the south, towards Afghanistan, but without the participation of Russia.” (Kommersant.ru). According to Russian media, Moscow also plans to conduct its 5 + 1 negotiations with the Central Asian countries this year. This will be the third meeting in such a composition. In addition, Moscow intends to continue to strengthen security ties within the CSTO and seeks to develop military cooperation between the organization and Uzbekistan, if not to return Uzbekistan to its fold (Kommersant.ru).

Both Russia and China have already established economic and security alliances (the EEU, CSTO and SCO) with the regional states. According to MGIMO scholar Andrei Kazantsev, the U.S. is not seeking to make Uzbekistan and Kazakhstan allies, “as they well understand that the degree of their partnership with Russia and China is much higher.” Moreover, he expressed confidence that neither Kazakhstan, nor Uzbekistan, even if they now need Western investments, will oppose Russia or China, despite any promises by the U.S. (Uz.sputnik.ru). Indeed, the leaderships of the Central Asian republics avoid to supporting one side in the geopolitical competition but prefer balancing between different partners. As Uzbekistan’s Foreign minister put it during his meeting with Pompeo,“… we want to see Central Asia as a region of stable development, prosperity, and cooperation, and we would really not like to feel on ourselves unfavorable political consequences in relation to some competition in our region between great powers.” (State.gov)However, the region’s states understand that without American involvement, it will be much harder for them – if not impossible – to balance Russia and China. In this respect, the recent energy war between Belarus and Russia is a striking example for them. This need for an American presence would be particularly important if relations between China and Russia strengthen even more. Moreover, amidst the fall of energy prices and the world economic downturns, there is increased demand for American investments in the region. These are key factors why the regional states are interested in developing relations with the United States.

CONCLUSIONS: Geographical distance, along with China’s towering economic presence and Russia’s strong political influence and security relations in the region raises questions about how significant the U.S. involvement can be in Central Asia. China and Russia have leverages to challenge the evolution of U.S. political and security relations with the regional states. However, a need to have a partner whose presence in the region allows Central Asian states to have more freedom of maneuver in their relations with Russia and China determine the development of relations with the United States. For this end, the Central Asian states welcome a continued American strategy that approaches the region holistically.

Nurlan Aliyev is a PhD Candidate and Researcher at the Faculty of Political Science and International Studies of the University of Warsaw. He received the Visegrad Fund Scholarship for 2018-2019. From 2000 to 2017, he worked as an expert at various government, non-government and international institutions. His research focuses on Russia’s foreign and security policies, post-soviet countries and asymmetric warfare threats.

More in this category: « COVID-19 and Afghanistan's Conflict Dynamics Central Asian Salafi-Jihadi Groups and the US-Taliban Peace Agreement »
back to top