Kyrgyzstan's Election Controversy: Cause for Concern?

On October 16, Kyrgyzstan announced that the winner of the country’s presidential election with 54 percent of the vote was Sooronbay Jeenbekov. The election nonetheless received criticism for the way it was carried out from international organizations such as the Organization for Security and Cooperation in Europe (OSCE). Other commentators have noted that the departing president, Almazbek Atambayev, also invested personal and state resources to support Jeenbekov’s election. Kyrgyzstan’s reputation as the “island of democracy” in Central Asia has suffered a setback. Amid other concerns about jihadist radicalization in the country, Kyrgyzstan will struggle to reclaim its reputation as a democratic model for the region, especially in the eyes of its neighbors. 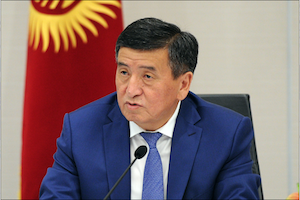 BACKGROUND: Kyrgyzstan’s presidential election was significant because, aside from Atambaev’s election after interim President Roza Otunbaeva, it was the country’s first transfer of power from one president to another through an election under its 2010 Constitution. Prior to this election, Kyrgyzstan saw transitions of presidential power through violent revolutions in 2005 and 2010. Atambayev came to power in 2011 after an interim president led the country from 2010 to 2011 and served the maximum allowed one six-year term until 2017. There was little chance that Atambayev would seek to violate the Constitution and run again: he was not particularly popular and Kyrgyz institutions and international pressure would have been strong enough to prevent such a move.

However, Atambayev used his influence to openly support Jeenbekov as his successor. Atambayev has also been criticized for appearing to hint that Umarbek Babanov, who came in second place in the election, was too “pro-Uzbek.” Babanov reportedly said to Uzbek youth during the campaign that, “if a policeman disturbs Uzbeks, he will be fired.” The Central Election Commission accused Babanov of “stirring up inter-ethnic enmity.” Presumably Babanov made this statement to win supporters in the south of the country, where most of the Uzbek population lives. Yet this is also Jeenbekov’s native region and thus hosts most of his patronage network. Nonetheless, Jeenbekov is a Kyrgyz and any impression among Uzbeks in the south that Atambayev and Jeenbekov were playing to Kyrgyz nationalistic sentiments risks alienating the Uzbek population of the south, which has disproportionately seen Uzbek youths travel to Syria since the inter-ethnic violence during the revolution in 2010.

Some election statistics have also given rise to suspicions about the vote’s legitimacy. For example, nearly 70 percent of eligible voters in Osh in the mostly pro-Jeenbekov south are said to have voted. This is a high turnout for any country but especially in a region like Osh where many youths (approximately 20 percent) travel to Russia for migrant labor. The overall national turnout for the election was 56 percent, while in Babanov’s home region of Talas the turnout was 61 percent. Some members of Babanov’s campaign also complained that the security services interrogated them on Election Day about plots to foment a revolution if Babanov did not win, meaning they could not act as observers to oversee the balloting.

The OSCE also stated that there were “numerous and significant procedural problems” in the election, along with “cases of misuse of public resources.” The OSCE added that “pressure on voters and vote-buying remained a concern.” Nonetheless, the OSCE praised the peaceful transfer of power after the election results were tallied.

IMPLICATIONS: Kyrgyzstan has often been heralded as a possible model for Central Asia because of its 2010 Constitution, its reputation for an open civil society and what has seemed to be a developing democratic system. When the international community has expressed interest for other countries in the region to follow Kyrgyzstan’s lead, the country’s democracy is often cited as the reason. Now that this election has been subject to criticism and allegations of misconduct, it will be more difficult and therefore less likely for Kyrgyzstan to maintain such a reputation in the eyes of the international community.

The conduct of the election also suggests that the international community likely overrated Kyrgyzstan in its estimation of its democratic progress. Instead, the election shows that the country is still a nascent democracy and that many of its institutions remain new and underdeveloped. Nonetheless, the lack of violence after the election despite some irregularities demonstrates that the citizenry has matured enough to respect even a potentially flawed vote. That in and of itself is a step forward for Kyrgyzstan.

There are also implications for the Uzbek minority in southern Kyrgyzstan. If they perceive Jeenbekov as a Kyrgyz nationalist, it could lead to them to become disinterested in the political system and resentful of the new government and its role in fomenting Kyrgyz nationalism in the country. The first minor exodus of Uzbeks from Kyrgyzstan to fight in Afghanistan occurred after the 2010 revolution, with several hundred departing to Syria in subsequent years. Uzbeks from Kyrgyzstan have been the largest Central Asian contingent in Syria, and any alienation of that community at home will likely lead to more recruits abroad. This raises concerns in other Central Asian countries, especially after the 2016 car bombing of the Chinese embassy in Bishkek.

While the election result will seemingly not have significant geopolitical ramifications, it will likely benefit a Russia- and China-centric security order in the region. Jeenbekov was considered to be the pro-Russia candidate and will during his presidential term likely allow the continuation of a Russian military presence in Kyrgyzstan, which China also tends to support as a way of deferring to Russia on certain regional security matters while China predominates the region economically. This may, however, be considered an unwelcome development by other countries in the region that seek to balance between the major powers in Central Asia and view a growing and solidifying Russian military presence in the region as a bend too far in the direction of Russia and China.

CONCLUSIONS: Jeenbekov will take over the presidency in Kyrgyzstan, as intended by his predecessor Atambayev. Nonetheless, lingering economic difficulties, security challenges related to Syria and a growing divide in the country between north and south politically and at times Kyrgyz and Uzbeks ethnically will be among the issues facing Jeenbekov in his first years in office. If he cannot resolve these core issues, then it is unlikely that he will be able to “choose” his successor in six years as Atambayev did for him.

More in this category: « China's Aluminum Industrial Capacity Cooperation in Kazakhstan Are We Seeing the Beginning of ISIS-Taliban Collaboration in Afghanistan? »
back to top