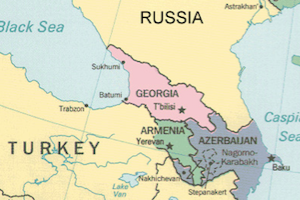 BACKGROUND: Since Moscow’s policymakers shifted their focus from Ukraine to Syria, with a substantive presence on the ground, the growing economic partnership between Moscow and Ankara has been replaced with an evolving political crisis. The tension between these powers, complemented with continual testing of each other’s airspaces and mutual accusations, has growing implications for the strategic environment in the South Caucasus.

Russian jets first intruded into Turkish airspace on October 6, shortly after Russia commenced its air strikes in Syria. Moscow received a convenient pretext to bolster its capacity in the South Caucasus through new military infrastructure in Armenia on October 10, when Turkish military helicopters violated Armenian airspace (see the 11/12/15 Issue of the CACI Analyst). Presumably, the intrusion constituted Turkey’s retaliation for consistent similar actions by Russian jets and demonstrated that Ankara views Armenia as a Russian operative space, as a result of to Moscow’s comprehensive interference in Armenia’s domestic affairs in recent years.

Given the prevailing narrative within Armenian society on the existence of a threat from Turkey, Moscow has actively used the helicopter incident as an additional motive for adapting Armenian territory into an unlimited area of actions for Russia.

The timing seems opportune to lift the restrictions on Russian military deployment in Armenia, deviating from the bilateral agreement regarding Russia’s 102nd military base in Gyumri. To this end, on November 11 Russia’s President Vladimir Putin ordered preparations for a comprehensive agreement on joining Armenia’s air defense with Russia’s, akin to similar deals that Russia has established with Kazakhstan and Belarus.

Armenia’s Minister of Territorial Administration and Emergency Situations has also declared that Russia, as a result of the forthcoming joint air defense deal, will deploy heavy military helicopters at Stepanavan airport, about 20 kilometers from Armenia’s border with Georgia. However, Moscow’s central objective is to boost its air capabilities at Erebuni airport, along with reinforcing the Gyumri military base, which hosts almost 5,000 personnel and a range of offensive and air defense assets. Moscow thereby seeks to develop “anti-access and area denial capabilities” in the South Caucasus, combined with previous deployments in Crimea and the mentioned deals with other CSTO members.

While some consider Moscow’s pursuit of increased military capacities in the South Caucasus as a response to the “substantial package” that NATO offered Georgia in 2014, Moscow has in reality consistently worked toward this goal since its war with Georgia in 2008. The ongoing crisis with Turkey presents Moscow with a pretext for even further incapacitating Armenia as a political actor and increasing its pressure on Azerbaijan and Georgia.

IMPLICATIONS: In the days following the downing of the Russian aircraft and amid overall condemning rhetoric on Turkey, the Russian Duma introduced a draft criminalizing denial of the Armenian genocide in order to put moral and political pressure on Ankara. Meanwhile, more pragmatic Russian politicians put forth the idea of doubling the planned enlargement of the 102nd military base, deploying more military personnel along with the components of the S-400 missile air defense system. This suggestion seems to buttress the argument that the forthcoming agreement on joint air defense systems will set the stage for facilitating Russian military employment of Armenia’s territory.

These steps will profoundly circumscribe Armenia’s ability to pursue foreign and security policy objectives independently in the region and turn the country into an instrument in Moscow’s hands in its volatile relations with Turkey and competition with NATO in the Black Sea. Towards this end, the Armenian factor is seemingly presenting Moscow with convenient leverage, which it will likely exploit to blackmail Ankara – thereby dragging Armenia into its confrontation with Turkey.

It is, however, unlikely that Russia will seek to escalate the situation with Turkey, not least out of concern that Ankara may refuse to allow the Russian fleet passage through the Bosporus and Dardanelles, emanating from Turkey’s right according to the 1936 Montreux Convention. For this reason, Turkey holds certain leverage over Russia’s ability to gain a foothold in Syria.

Furthermore, Russia and Turkey are economically interdependent in terms of their financial systems, trade and tourism, and prolonged damage to these ties will have a pernicious impact on both economies.

Against this backdrop, it is important to bear in mind that Russia and Turkey have historically shaped political capacities for defusing periodically accumulated tensions, implying that the current friction will hardly persist in the long-term perspective and that their relations will be normalized. It is becoming clear that the crisis between Russia and Turkey will pass, especially taking into account their considerable experience of distinctively effective bilateral relations.

It is also evident that the tensions with Turkey will not alter Moscow’s imperatives in the South Caucasus, and that President Erdogan is unlikely to bring a range of issues pertaining to this region into question. Moreover, Moscow pursues recognition of its right to perform a peacekeeping role in the Nagorno-Karabakh region (see the 10/13/2015 issue of the CACI Analyst). It remains to be seen whether the situation affects the Armenian-Azerbaijani conflict, where Moscow’s plan plausibly involves a territorial handover by Armenia and a revision of Nagorno-Karabakh’s current status.

However, the crisis has enabled Russia to gain some tactical advantages in the South Caucasus by ramping up its military capacities. These perspectives are amplifying the existing discontent within the Armenian public and many consider Russia’s attempts to “privatize” the fate of Nagorno-Karabakh as a step towards turning it into an object of bargain with both Turkey and Azerbaijan. Another commonly voiced opinion is that Russia is turning Armenia into a target for the West and in this case for Turkey.

CONCLUSIONS: The current standoff between Russia and Turkey is tangible, whereas the South Caucasian states, and especially Armenia, are facing considerable new challenges. While increased control over the Nagorno-Karabakh problem will grant Moscow leverage in its relations with Azerbaijan, Moscow is increasingly using Armenian issues to pursue its short-term goals with regard to Turkey. In geopolitical situations like the recent incident with Turkey, Moscow has demonstrated its ability to exploit Armenia’s statehood and aspects of its history like the Armenian Genocide in its tactical interests. Unless Russia faces staunch resistance from both Armenian civil society and the country’s authorities, Armenia will serve few other international functions than a tool for imposing Russia’s agenda on the South Caucasus.

Notwithstanding the political contradictions between Russia and Turkey regarding the annexation of Crimea and the Syrian conflict, there is little to suggest the South Caucasus will be a main arena for their disagreements.

AUTHOR’S BIO: Eduard Abrahamyan, PhD is a policy analyst from Armenia. He is currently based at the University of Westminster in London, and is a fellow of Policy Forum Armenia, Washington DC.

More in this category: « Russia's missile launches and the militarization of the Caspian Sea Russia's Gazprom to deepen its presence in the Georgian market? »
back to top