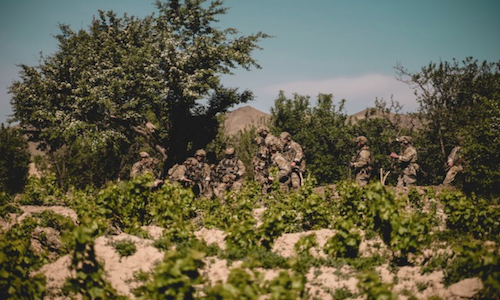 BACKGROUND: Central Asian Salafi-Jihadi groups, backed by Al-Qaeda, were encouraged by the U.S.-Taliban agreement signed in February 2020. Uzbek groups including Katibat Imam al-Bukhari (KIB), Katibat Tawhid wal Jihad (KTJ), and the Islamic Jihad Union (IJU), along with Tajik Jamaat Ansarullah (JA) and the Uighur fighters of Turkestan Islamic Party (TIP) from China’s Xinjiang region, have expressed clear opinions about the deal through their respective Telegram accounts. The groups have either hailed the agreement or dedicated emotional eulogies to the Taliban.

The KIB, formed primarily by Uzbek, Tajik and Kyrgyz militants from the Fergana Valley, was one of the first Jihadi groups to congratulate the Taliban, denominating the deal as a “great victory of the Islamic Ummah.”  In his congratulatory letter to the Taliban on February 29, KIB leader Abu Yusuf Muhajir labelled it a “humiliation, disgrace, and failure of the crusade” of U.S. and NATO forces. Abu Yusuf proceeded to praise the former Taliban amir Mullah Mohammed Omar, describing him as steadfast against the Americans. He also congratulated the Islamic Ummah on the Taliban “victory” and attached a poem, “My Dear Taliban,” to his letter.

The KTJ group, which swore allegiance to al Qaeda in 2015, enthusiastically praised the Taliban “successes.” On March 15, the KTJ threatened the Central Asian states via its Telegram account “Mujahideen of Sham.” Its members reacted furiously to Uzbek Foreign Minister Abdulaziz Kamilov, who during the signing ceremony of the U.S.-Taliban agreement in Doha stated that Uzbekistan would not interfere with the internal affairs of the Taliban. KTJ mocked the top Uzbek diplomat by calling him Tahgut [A Quranic term referring to those who rebel against Allah and transgress his will] and threatened the current Central Asian regimes. KTJ also honored the deputy Taliban leader, Mullah Abdul Ghani Baradar, emphasizing that in 2010, he was in Karachi prison as a terrorist and in 2020, he signed an agreement on the “surrender of America.” KTJ continued to state that “America humiliatingly acknowledged its defeat by the lions of Islam and this victory came at the behest of Allah, who subordinated the chief Shaitan [evil spirit in Islamic belief] to Mujahideen [holy warriors].”

The Uighur TIP also praised the Taliban victory and described the Afghan government as “traitors” over its radio “Voice of Islam,” posted on the Muhsinlar.net website on March 7.

IMPLICATIONS: The U.S.-Taliban agreement sharply raised the morale of Central Asian Salafi-Jihadi groups. They did not hide their cheery emotions on social media, posting gushing praises for the Taliban along with “Takbir” [Allah is greater].

The reason for the delight among Central Asian Salafi-Jihadi groups is that they have long-term and close ties with both the Taliban and al Qaeda. They are united in their aim to establish an Islamic government in Central Asia and China’s Xinjiang region, which would be governed by Sharia law.

This structure has a historical background, which should not be underestimated. Many Uzbek, Tajik, Kyrgyz and Uighur extremists, targeted by government forces in their homelands, were forced to flee and found refuge in Afghanistan during the Taliban’s rule from 1996 until 2001. The ideological views of the Central Asian Muhajireen [foreign fighters] were formed and refined under the influence of al Qaeda and the Taliban. This conception was crucial in determining the later fate of the Taliban, when the U.S.-led invasion toppled its regime for providing refuge to al Qaeda and its leader Osama bin Laden. The Central Asian jihadists became deeply integrated into the ranks of al Qaeda, which today has become the Taliban's Achilles heel in its relations with Washington.

Judging by their reactions, the Central Asian jihadists are not at all concerned over the Taliban’s commitment to sever contacts with themselves and al Qaeda. The U.S. withdrawal from Afghanistan, the Taliban’s return to power and the establishment of an Islamic Emirate based on Sharia law, was a long-awaited dream for these groups.

Among the Salafi-Jihadi movements of the post-Soviet area, the Uzbek KIB is closest to the Taliban regarding its ideological views on jihad and Sharia policy. The KIB openly identifies itself as an integral part of the Taliban, having publicly sworn allegiance [Bayat] to the latter in 2014. The group officially refers to itself as “the Islamic Emirate of Afghanistan – Katibat Imam al Bukhari.” It has the same emblem as the Taliban and operates in both Afghanistan and Syria. The Taliban and Sirajuddin Haqqani, one of the Taliban’s top deputies and leader of the powerful al Qaeda-linked Haqqani Network, were instrumental in deploying KIB to Syria from Afghanistan. The U.S. State Department designated KIB to the list of global terrorist organizations affiliated with al Qaeda on March 22, 2018, whereas the UN Security Council has expressed particular concern that “KIB leaders view Afghanistan as a new staging ground to project attacks against neighboring Central Asian countries.”

The al Qaeda-affiliated TIP and the Taliban have a long and trusting relationship based on the general principles of Jihad. According to the UN Security Council, “the ETIM/TIP’s leadership and Uighur militants remain present in Afghanistan.” The TIP’s emir, Abdul Haq al-Turkistani, who is a steadfast brother in arms of Ayman al-Zawahiri and Haibatullah Akhunzada, periodically claims his unfailing allegiance to both al Qaeda and the Taliban. As the TIP’s top leader, who was even appointed a member of al Qaeda’s elite Shura Council in 2005, he has sought to maintain the unity of Sunni Salafi-Jihadi groups under the leadership of the Taliban.

IJU, KTJ and IMU also fight under the auspices of the Taliban in Afghanistan. According to the UN Security Council, “IMU is now integrated into Taliban forces operating in the Provinces of Faryab and Zabul,” while “IJU, led by Ilimbek Mamatov, is operating primarily in the Afghan Provinces of Badakhshan, Sari Pul and Takhar.” Almost all of the Central Asian terrorist groups in Afghanistan have reported via their Telegram channels that they participated in the Taliban’s “Al-Fath Jihadi Operations” last year.

CONCLUSIONS: The U.S. legitimization of the Taliban by concluding the “peace” deal will force the five Central Asian governments to build bridges with the Taliban. Prior to this, only Uzbekistan had informal contacts with the Taliban, organizing an Afghanistan peace conference in March 2018 in Tashkent.

Central Asian governments are aware that the Taliban will control Afghanistan in the future. For them, the main security challenge is al Qaeda-linked Central Asian Salafi-Jihadi groups and the remnants of the Islamic State Khorasan (IS-K) operating in Afghanistan. KIB and IJU have used the U.S.-Taliban deal to recruit new militants from Central Asia.

The Taliban factor could also provide inspiration and a morale boost to underground radical Islamists inside Central Asia and encourage them to raise arms against secular regimes. If the Taliban comes to power in the future and establishes Sharia rule in Afghanistan, this could increase the activity of the Islamic opposition in the five countries to the north.

There should be no illusions that the Taliban will abandon al Qaeda and Central Asian Salafi-Jihadi groups closely aligned with the Bayat easily or quickly. Moreover, the Taliban has a fragmented and networked structure, within which many local armed leaders respect the relationship with Central Asian Muhajireen. Therefore, their relationship will expectedly continue to develop in secret, in order not to provoke the United States. Central Asian regimes must seriously prepare for a new redistribution of power and resources in Afghanistan after the withdrawal of U.S. troops, which could be accompanied by hostilities felt far beyond Afghanistan’s borders, for several years to come.

Uran Botobekov, PhD, is an expert on Political Islam and the author of “Anatomy of Central Asian Salafi groups,” (Modern Diplomacy, 2019).

More in this category: « U.S. Presence in Central Asia: Realities and Perspectives Post-COVID-19: Challenges and Opportunities for Central Asia »
back to top