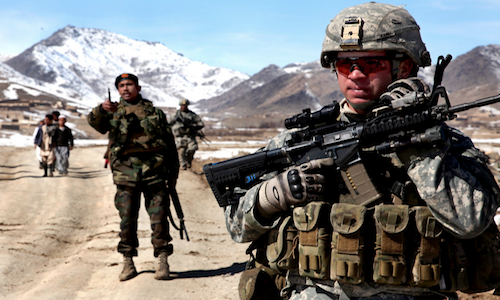 BACKGROUND: Moscow’s response was predictable. In his end-of year press conference, Vladimir Putin indicated that Russia now had to beef up its military base in neighboring Tajikistan, which is an instrument of direct pressure upon Dushanbe and other Central Asian states. Undoubtedly, Moscow will also strengthen its ties with Pro-Russian elements in Afghanistan and continue its efforts to bring the Taliban into any future Afghan government. This task has been simplified by Kabul’s realization that it cannot count on Washington, certainly not for any kind of strategic perspective on the war against the Taliban or larger regional issues. Neither do the Taliban have any genuine incentive for serious negotiations with Kabul and the U.S. government; if they continue to press the issue as they have done throughout 2018 and before, the U.S. will simply abandon the field for lack of any coherent strategic guidance or insight into the future. These calculations, which are already taking shape, will facilitate Moscow’s endeavors to play a future leading role in Afghanistan and gain the leverage it has sought for forty years although outright control is no longer on its agenda. That outcome represents a calamity also for Central Asian governments, in particular Uzbekistan and Kazakhstan, who now know that they cannot rely on the understandings that they had reached with President Trump.

However, China, not Russia, is the biggest winner here. As Trump announced his decision, China signed a MoU with Pakistan and Afghanistan, whose relations are notoriously bad, to cooperate on counter-terrorism and urge the Taliban to return to the negotiating table. Thus, China has exploited its huge investment in Pakistan to force it to cooperate, at least on paper, with Kabul, and vice versa. All three countries will embrace regional connectivity and economic development under the framework of China’s Belt and Road Initiative (BRI). China suggested that Afghanistan could also benefit from the mammoth China-Pakistan Economic Corridor projects through these multilateral frameworks. Since the BRI, particularly in Pakistan, is a cover for Chinese economic and military power, this agreement is a cover for China’s expanding economic and military role in Central and South Asia. China will do all it can to enhance trust between Pakistan and Afghanistan, i.e. it will become their arbiter if it can. Thus, both Beijing and Moscow will enhance their military and economic as well as political positions across Central Asia at the U.S. expense.

Yet China’s gains do not end here. Since the agreement was reached on December 17, 2018, China and Pakistan have held intensive diplomatic discussions to decide how to proceed further in the light of Trump’s decision to withdraw half the U.S. forces from Afghanistan. Amazingly, and in a sign of China’s power, Pakistan has now acknowledged the legitimacy of India’s role in Afghanistan. This startling development strengthens the aforementioned trilateral agreement, giving India reasons to buy into it by achieving one of Delhi’s great objectives; Pakistan’s acknowledgement of its legitimate interests in Afghanistan. Even if this does not bring about a discernible improvement in ties between the Indian and Pakistani governments, the decision could not have been made had China not guaranteed Pakistan support in mediating any future contentions with New Delhi over Afghanistan.

IMPLICATIONS: U.S.-sponsored negotiations with the Taliban will presumably not proceed smoothly, since from the Taliban’s standpoint time is on their side. Kabul now has to turn to Beijing and will likely come under enhanced pressure to seek support also from Moscow. Since China and Russia will avoid interfering with each other, the likely result is increased Sino-Russian cooperation to forge a settlement that brings the Taliban into a future Afghan regime and that also ensures Pakistan’s equities, which are now shared by Russia and China.

In other words, those three states as well as India will compete constantly for influence in a weakened Afghanistan, which will likely remain a hotbed of internal strife. It is quite unlikely that the Taliban will settle for being coalition partners. In other words, the likely outcome is a Balkanization of Afghanistan and its continuing subjection to excessive foreign influence, expressed through clients of rival foreign powers within Afghanistan. This will not be a recipe for peace or for an end to terrorism, whatever Moscow and Beijing say. While the Taliban will probably not strike at its partners for some time; there is good reason to expect covert support from elements of either or both the Russian and Chinese governments in such a campaign.

As part of the Trump Administration’s policies, Washington and Tokyo have committed to challenging China’s BRI in Central Asia and beyond. Even if Washington continues to support those policies and commit to upgraded economic interaction with Central Asia on trade, investment, and infrastructure, it will hardly be seen as a credible partner for any Central Asian government because of Trump’s precipitous decision. Given that the credibility of U.S. guarantees, a precious asset, has been devalued, Central Asian governments will be unable to count on U.S. understanding of the strategic currents and interests involved in their region.

These great and medium power maneuverings open a new page in the never-ending effort of those states to influence events in Afghanistan and among its neighbors. They also betoken the continuing diminution of U.S. influence, which temporarily increased due to the Trump Administration’s careful, modest, but nonetheless notable increase in attention to Central Asia in 2017-18. Even if Washington’s influence does not equate that of Beijing and Moscow, this failure deprives the government in Kabul and governments throughout Central Asia of an important instrument in their constant efforts to balance against Chinese and Russian pressure.

Central Asian governments are by now well attuned to the risks of participation in the BRI, but they are also not in a position to resist offers of billions in vital investment even if there are strings (both hidden and overt) attached. Neither can they simply deny the terrorist threat and the necessity of Russian protection against it. Indeed, if the forecast as to Afghanistan’s future is correct, the likelihood of reviving terrorism in Central Asia cannot be dismissed out of hand even though much of the attention to the problem over the last 15 years has been hype. If terrorists have a perch in government, their capacity to wreak havoc at home and abroad is magnified commensurately as we saw on 9/11.

Moreover, they will now have important allies. Moscow is in fact a state sponsor of terrorism in Ukraine and the Middle East as a principal armorer of Hezbollah and supporter of many Iranian–backed groups. Given the anti-Westernism that drives its policies, we should not be surprised if the “Silovye Struktury” (Power structures), make use of the Taliban for missions that advance both of their perceived interests.

CONCLUSIONS: Washington may be leaving Afghanistan abruptly but for several years, it has been unable to formulate or envision a strategy that could bring lasting peace to Afghanistan. As this withdrawal continues – and given Trump’s decision and predilections, it undoubtedly will – others will try to bring their influence to bear on Afghanistan, again making it a victim of the most recent form of the contemporary Great Game. Can we realistically hope that Moscow and/or China will be able to cobble together a lasting and legitimate order inside Afghanistan with the Taliban in the government? Will India accept Pakistan’s offer or react with its traditional suspicion of Pakistan and determination to compel Islamabad to recognize its equities in Afghanistan and elsewhere? If there are any experts who believe in these optimistic scenarios, now is the time for them to make their case.