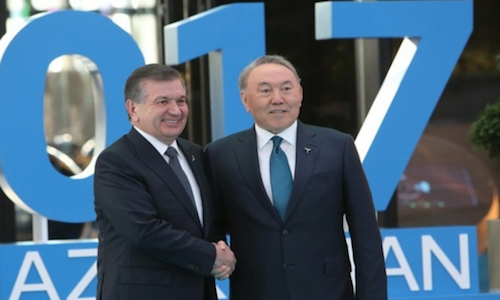 BACKGROUND: Over the past two decades, regional cooperation in Central Asia has left much to be desired. Yet in the past two years, there are important indications that this gloomy picture is rapidly changing. The pace of interaction among regional states has grown considerably, and controversies over issues like border delimitation and water use have been largely resolved. In March 2018, leaders of five Central Asian states met in Astana at the invitation of the President of Kazakhstan, but at the initiative of the President of Uzbekistan. In June that year, the United Nations General Assembly passed a resolution, submitted by Central Asian states, that supported the strengthening of regional cooperation in Central Asia. (See CACI Analyst, September 5, 2018) Preparations are underway for a second summit of Central Asian leaders in March 2019. What are the prospects of such cooperation? As Central Asians look to develop structures of cooperation, two factors will be of key importance: learning from their own history of cooperative initiatives, as well as from the experience of other regions around the globe. Further, they will need to determine how fully to integrate Afghanistan in their structures of cooperation.

The history of Central Asian regional cooperation is a more positive one than usually acknowledged. In 1993, the leaders of five post-Soviet states redefined the region as “Central Asia”, rather than the Soviet term “Middle Asia,” and affirmed that Kazakhstan was an integral part of it. Moreover, over the ensuing two decades Central Asian states succeeded, in spite of opposition from the great powers, in establishing Central Asia as a Nuclear Weapons Free Zone. And the notion that Central Asian regionalism never developed is simply false: in the mid-1990s, a budding partnership between Tashkent and Astana was broadened to include both Kyrgyzstan and Tajikistan. This led to the creation of the Central Asian Union, later renamed the Central Asian Cooperation Organization (CACO). CACO was increasingly successful; but it fell victim to the acceleration of geopolitical competition in the region in the early 2000s. The problem was the inherent tension between Central Asian cooperation and Eurasian integration, led by Moscow. When Vladimir Putin asked to join CACO, and subsequently engineered its merger into Eurasia-wide integration structures in 2005, this effectively put an end to Central Asian cooperation. As Central Asian states seek to rejuvenate these ties, a key challenge will be to insulate them from the relationships with powers like Russia and China that remain key to all regional states.

As they develop regional cooperative structures, Central Asians need not reinvent the wheel; in fact, the experiences of countries as diverse as the Nordic countries, South America, and Southeast Asia are all relevant to Central Asia. These regions have achieved successes, endured failures, and grappled with challenges that are not dissimilar from those faced by Central Asian leaders today. However, continent-wide supranational structures like the EU and the Eurasian Union do not hold appeal for the region. Instead, institutions such as the Visegrad Group, Mercosur, the Nordic Council and ASEAN are more relevant to the ambitions of Central Asian regional cooperation.

IMPLICATIONS: From a Central Asian perspective, the Visegrád model has certain specific attractions. Following the 2018 Astana Summit of Central Asian leaders, President Nursultan Nazarbayev referred to the Visegrád model in underlining the informal character of the summits of Central Asian leaders. (See April 30, 2018 CACI Analyst) And in a sense, given the upcoming summit of Central Asian leaders, regional cooperation is already moving in the direction of a format similar to Visegrád: informal and close coordination with yearly meetings of heads of states. But it is important to reflect on the reason why Visegrád cooperation is not more institutionalized than it is: because any further institutionalization would be redundant within the framework of the EU and NATO membership of all its four member states. Even in the benign context of membership in the EU and NATO, being part of a larger institutional context imposed clear limits on the ability of Visegrád countries to develop their regional cooperation, and reduced them to a sub-group within the larger European structures – something that they judged to be worthwhile, given the benefits of EU and NATO membership. For Central Asia, however, there is no similarly beneficial form of pan-regional cooperation. The lesson is that Central Asian cooperation must remain Central Asian in order to avoid again losing its purpose.

The lack of a strong institutional basis governing MERCOSUR’s membership hampered the long-term development of the organization. Meanwhile, the coexistence of two key powers in the organization – Brazil and Argentina – and the central role of the management of their relationship has certain obvious lessons for Central Asia. Beyond that, MERCOSUR’s early successes are an indication that regional cooperation has the power to greatly increase trade among countries that initially were not notably interdependent, as remains the case in Central Asia. At the same time, it appears that a focus solely on economic matters, as in the case of MERCOSUR, does not provide  a sufficient foundation upon which to build a solid regional identity and valid regional structures.

The Nordic region shares many similarities with Central Asia, and is in many ways more similar to it than is Southeast Asia and the ASEAN countries. The Nordic countries – Denmark, Finland, Iceland, Norway and Sweden – share a close cultural, religious and historical relationship. Scandinavian languages, like Turkic languages in Central Asia, are closely related. Finnish, like Tajik, is of a different origin. No country has a dominant position in Nordic Cooperation. Importantly, despite their commonalities the Nordic countries display considerable differences in their membership in international organizations. Denmark is the only Nordic country to be a member of both the EU and NATO. Norway is a member of NATO but not of the EU; Sweden and Finland are EU members but do not belong to NATO. This is similar to Central Asian states’ divergent patterns of membership in Eurasian cooperation organizations. What the Nordic model indicates is that such divergent attitudes to continent-wide cooperation need not be a hindrance to closer regional cooperation among a set of like-minded countries that share common interests and characteristics. The Nordic experience shows not only that it is possible to develop meaningful regional cooperation under such conditions, but that it strongly complements it: Nordic cooperation has enabled Norway to stay informed about EU matters, and Sweden and Finland about NATO. The budding Nordic Defense Cooperation also shows that their regional cooperation can definitely include the realm of hard security issues.

Similarly, Central Asian cooperation can assist states that have chosen not to be deeply integrated into Eurasian organizations to develop a more nuanced understanding of the realities of regional geopolitics.

ASEAN’s experience is of definite relevance to Central Asia. As prominent Singaporean diplomat Bilahari Kausikan has observed, ASEAN states have much less in common even after a half-century of cooperation than do Central Asian states. ASEAN countries diverge fundamentally in languages, ethnicity, religious traditions, and economic development. They also developed their cooperation in an intense geopolitical context that was dominated by the superpower confrontation during the Cold War – and in recent years by the rising Asian behemoth, China. One of ASEAN’s distinctive features has been the organization’s practice of conducting dialogues as a unit with foreign powers. Just as ASEAN has developed dialogues as a unit with powers like China, Russia, South Korea, and Germany, so Central Asians can advocate that the institutional structures that they have individually developed with Japan, Korea, Europe and the United States be recast as region-wide consultations.

Moreover, Central Asia can benefit from ASEAN’s experience in the development of a core of solidarity among regional members in order to prevent foreign powers from playing ASEAN members against each other. This served the organization well during the Cold War, and has continued to be of great value as Southeast Asia reckons with the rise of China. ASEAN offers no panacea for managing assertive great powers, but it has sent a strong signal to such powers that regional states have a primary loyalty to each other, following which they can jointly develop fruitful relations with great powers. Cooperation among ASEAN members benefits the member states themselves and is not directed against anyone. As President Nazarbayev stated following a 2018 meeting with President Mirziyoyev, Central Asians are capable of managing the challenges in Central Asia without the interference of outsiders.

CONCLUSIONS: A comparative examination of structures for regional cooperation leads to a very specific and highly significant conclusion, namely, that institutions matter. Indeed, the relative weakness and ineffectiveness of Mercosur and the Visegrád group is a direct consequence of their weak institutional structures. ASEAN and the Nordic Council, by contrast, derive their effectiveness from the fact that over more than half a century they have focused serious attention on strengthening their institutional structures. The coherence and rigor of Central Asia’s future institutional structures will determine their effectiveness. This, rather than high-flown rhetoric about regional cooperation or highly publicized one-time meetings and conferences, will shape the future of Central Asia.

The question of Afghanistan’s role must also be front and center. There is increasing consensus in the region that Afghanistan is an inherent part of Central Asia, and post-Soviet Central Asian states are engaging with their southern neighbor more constructively than ever. How Afghanistan is included in structures of regional cooperation will be an important signal to the region’s willingness to move beyond definitions based on the Soviet era.

To conclude, it will be critical to pursue a pragmatic, flexible approach, emphasizing mutual interests and the principle of feasibility. It goes without saying that sustained and respectful dialogue at the top levels of national leadership will be of crucial importance to the future of regional cooperation in Central Asia. However, without effective and permanent institutional structures, it will not be possible to bridge the gap between good intentions and practical actions.

Svante E. Cornell is Director and S. Frederick Starr Chairman of the Central Asia-Caucasus Institute & Silk Road Studies Program, a Joint Center whose components are affiliated with the American Foreign Policy Council in Washington DC and the Institute for Security and Development Policy in Stockholm. They are the authors of Modernization and Regional Cooperation in Central Asia: A New Spring?, a November 2018 Silk Road Paper.

More in this category: « Thinking Big About Caspian Energy Bolton's Caucasian Tour and Russia's Reaction »
back to top