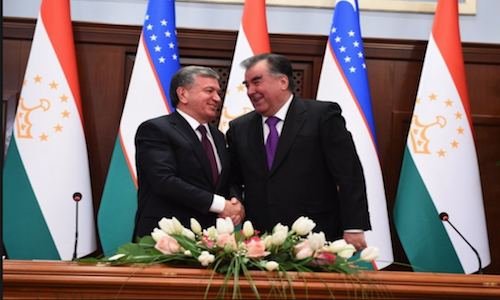 BACKGROUND: Throughout the post-Soviet era, relations between Uzbekistan and Tajikistan remained
complicated, controversial, strained and stuck in a state of “no war, no peace.” Several factors affected
interstate relations since the early 1990s. These include incomplete border delimitation; the establishment
of a strict visa regime between the two states; nationalist sentiments; historical claims regarding the
belonging of Samarkand and Bukhara; the construction of the Rogun Hydro Power Station (HPS) in the high
mountains of Tajikistan; and political and personal animosities between Rakhmon and Uzbekistan’s first
President, Islam Karimov.
As a result, mutual trade dropped to less than $ 1 million; flights between Tashkent and Dushanbe were
cancelled; and Tajik railway cargos transiting Uzbekistan’s territory were blocked. In August 2000, tensions
escalated when terrorist groups entered Uzbekistan’s southern province from Tajik territory and Tashkent
harshly blamed Dushanbe for its inability to prevent this incursion. The Rogun HPS drama remained the
most significant stumbling block in the confrontation between Tashkent and Dushanbe.
Uzbekistan has pursued a policy of prestige vis-à-vis Tajikistan, whereas Tajikistan’s strategy has aimed for
survival. Both proved to be unconstructive, since Tashkent and Dushanbe both lacked a preventive, good-
will, systemic and win-win approach, and adhered to unilateralist strategies (see the 05/16/2012 issue of
the CACI Analyst). This state of affairs poisoned not only relations between Uzbekistan and Tajikistan; it also
had detrimental effects on regional affairs in Central Asia. Paradoxically, at the same time, the history and
fates of the Uzbek and Tajik peoples have been so interrelated and intertwined for centuries that during his
state visit to Dushanbe in June 2000, Karimov portrayed Tajiks and Uzbeks as one people speaking two
languages.
Over time, however, even these two antagonists could not ignore Central Asia’s regional evolution. The
peoples and countries of the region are more interdependent than they may seem, and more united than
divided. Finally, Uzbekistan and Tajikistan understood the danger of crossing a red line in the growing
tension between them and took the first steps away from this dangerous trend.
Already at the start of Karimov’s last year in power, 2016, the parties began discussing an eased visa regime
and resumed flights between the two capitals – the two Presidents defined these problems as priority areas
that should be addressed as soon as possible. These were just the first tokens of rapprochement between
Uzbekistan and Tajikistan.
IMPLICATIONS: Karimov’s death in September 2016 became a symbolical “green light” for the construction
of Rogun HPS; which the Tajik side began in a month. This time, the Uzbek side did not react in the
predicted way, due to Mirziyoev’s altered regional stance, especially towards Tajikistan.
The period of almost half a year between Mirziyoev’s state visit to Tajikistan in March and Rakhmon’s
reciprocal visit in August saw a number of major breakthroughs: the visa regime was simplified; the
transport connection between the two countries was restored; and the National University of Tajikistan and
State University of Samarkand established cooperation. More than one million people have already crossed
the Uzbek-Tajik border this year. During Rakhmon’s visit, bilateral trade was announced to have increased
to U.S.$ 500 million in the near-term, with a projected increase of U.S.$ 1 billion – a direction signifying a
major shift in overall bilateral relations as well as the existence of a real potential for broad trade and
economic cooperation.
In March 2018, the Defense Ministries of the two states set up a cooperation plan for this year and signed
an agreement on cooperation in the transit of special cargo and military contingents through their

territories. As a follow up, during the August summit, Uzbek and Tajik border guards conducted joint
military-tactical exercises on the site where the borders of Uzbekistan, Tajikistan and Afghanistan intersect.
In the course of Rakhmon’s visit to Tashkent, the two sides signed 27 cooperation agreements relating to
industry, standardization and certification, border crossing, recognition of education documents, geodesy
and geology, agriculture and culture, among other. Both leaders, however, delicately bypassed the most
sensitive issue – Rogun – instead announcing that the two states agree to construct two other hydropower
stations on the Zarafshan River. Rakhmon even stated emotionally that Tajikistan will never deprive
Uzbekistan of its share of the Amu-Darya River’s water. Moreover, he advanced the initiative to provide
Uzbekistan with drinkable water from Tajikistan’s high mountainous Sarez Lake.
This was indeed a historical summit, the significance of which must be understood in a broader perspective.
The newly established strategic partnership between Uzbekistan and Tajikistan will have strategic
implications not only for the two states concerned, but for the entire Central Asian region.
First, the very notions of “upstream” and “downstream” countries, which have divided the two countries
over the Amu-Darya river flow, began to fade. More often than not, these simplistic notions have been used
to statically describe the negative status quo, which has impeded a more positive and sophisticated
approach to regional affairs. It is now obvious that the acute water sharing issue, which has kept the two
states on opposite sides of the barricade, can be strategically revised in a win-win approach.
Second, the joint military exercises of Uzbek and Tajik border guards, which were conducted for the first
time in the two states’ history, as well as the cooperation between their defense ministries also displayed a
common vision of potential security threats stemming from outside the region. The sides demonstrated
their will to deal with potential threats jointly.
Third, Tajikistan was the last, but not least, in Tashkent’s successful efforts aimed at revitalizing a friendly
and cooperative environment in Central Asia. As a result, Uzbekistan is now surrounded by strategic
partners. In turn, this falsifies another myth, namely that Tajikistan as a Persian-speaking nation would
avoid deeper integration with the region’s four Turkic nations. Noticeably, the Tajik President expressed his
support for the upcoming second consultative meeting of leaders of the Central Asian states, to be held in
Tashkent in March 2019. In this context, the Presidents and mass media repeatedly used the term
“rebooting” (perezagruzka) during the summit. Indeed, Uzbek-Tajik rebooting is, in fact, part of the overall
rebooting of the entire regional order in Central Asia.
Fourth, the summit also has a geopolitical dimension. Hopefully, Tashkent and Dushanbe confirmed once
again that there is no need for mediation by external great powers in mitigating tensions arising between
the Central Asian states. The further consolidation of Central Asia’s five countries as a regional group will
help promote their common regional interests on the international scene, especially given the susceptibility
of this area to geopolitical turbulence.
CONCLUSIONS: After the summit, President Mirziyoev stated: “If you ask me whether any issues still remain
unresolved in the relationship between our two countries, I answer ‘No’. Such issues no longer exist.” The
two state visits – Mirziyoev’s to Dushanbe and Rakhmon’s to Tashkent – were sufficient to raise the level of
bilateral relations to a Strategic Partnership. The treaty finally laid the ground for comprehensive
cooperation, mutual trust and friendship between these neighboring states and fraternal peoples. They
have really come a long way from the mistrust and interstate tension between Karimov and Rakhmon to
rapprochement and finally to strategic partnership.
Through Mirziyoev’s efforts, Central Asia is being reshaped as a region. Tashkent’s regional policy confirms
once again that Uzbekistan is a key country in Central Asia and that the ultimate success or failure of
regional integration depends to a decisive degree on Uzbekistan.
Of the various links and interactions between and among Central Asian states, the Uzbek-Tajik relationship
has remained the most problematic. It is now vitally important to build on the new and promising strategic
partnership.

Dr. Farkhod Tolipov holds a PhD in Political Science and is Director of the Research
Institution “Knowledge Caravan”, Tashkent, Uzbekistan.

More in this category: « Azerbaijan's Ballistic Missile Dilemma Sri Lanka's Lesson for Eurasia »
back to top