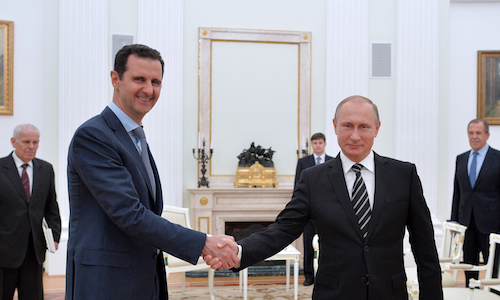 BACKGROUND: Western military analysts have described Russia’s efforts to build an integrated air defense system (IADS) and anti-ship system in terms of “bubbles” at certain “nodal points” and also employed the term anti-access area denial for this strategy (A2AD). These “bubbles” are in the Baltic, around the Black Sea, and around Syria. They also include the Caucasus. Just as Moscow has delivered Iskander missiles to Kaliningrad – a move that garnered much attention – it has also deployed them in Armenia, ostensibly though not actually, under Armenian control. Indeed, it is virtually inconceivable that Moscow would grant Yerevan operational as well as physical control over those missiles, which are dual capable and could take out any target in Azerbaijan or a radius of 500 kilometers (if not more). Those deployments in Armenia have received virtually no publicity in the West, once again signifying ignorance of Russian strategy and disinterest in the Caucasus. But they have vital strategic significance far beyond Azerbaijan and Georgia.

Coupled with the IADS and A2AD networks that Russia is building in and around Syria and the Black Sea, as well as the base in Iran that Moscow used this summer, Russia is constructing an elaborate network of air and naval defenses. This not only interdicts foreign intervention in Syria’s civil war; it also places the entire Caucasus beyond the easy reach of NATO and Western air or military power, while surrounding Turkey from the North, East and South with Russian forces and capabilities that can inhibit any Western effort to come to Turkey’s aid. These capabilities also include the naval and A2AD capacity in the Caspian and the deployment of Russian ships with Kalibr or other cruise missiles there, and the possibility of introducing nuclear-capable systems like the Iskander into the Baltic Sea – an already highly volatile theater – if not the Black Sea as well.

In other words, as Moscow moves to maneuver Turkey, as well as Georgia and Azerbaijan, into its orbit through combined economic, ethnic, military, and political pressures, it is also ensuring that these countries will be placed behind an air defense umbrella. This could allow the Russian army and/or navy to advance into them if necessary and to do so with impunity since Western forces would be deterred by the likely high rate of casualties they would incur. Indeed, when this system is completed, Moscow need not invade but only threaten to undermine the sovereignty or integrity of these countries, or their pro-Western affiliations and economic-political ties.

IMPLICATIONS: To intervene in Syria, Moscow had to get overflight rights from the countries of the Caucasus. It now has bases and/or deployed forces in Armenia, Syria, Abkhazia, South Ossetia, Crimea and the Donbass, and is building them into ever-larger units that could fight protracted wars with the West or anyone else. These bubbles will not only allow for unhindered intervention by ground or naval forces. They will also block any aerospace efforts to deliver ordnance upon Russian targets in this huge swath of territory or rescue states like Georgia and Azerbaijan from Russian threats.

Turkey can no longer be considered as a pro-Western power and its economic dependence upon Russia obliged it to seek a rapprochement with Moscow in advance of the abortive coup of July 2016. This leaves Azerbaijan and Georgia without reliable regional partners and adrift in a sea dominated by Moscow, Tehran, the erratic Turkey, and the increasingly absent or uncomprehending U.S..

It is well known that Moscow is attempting to monopolize any possible process leading to a settlement of the war over Nagorno-Karabakh and entice Azerbaijan into joining the Eurasian Economic Union. At the same time, it is tightening its already strong control over Armenian domestic and foreign policy while selling it more weapons and transferring much higher quality and more lethal ordnance like the Iskander to Armenia. Through such means, Russia can then try to dominate what Geoffrey Kemp and Robert Harkavy called the “energy ellipse” and the greater Middle East while ousting Washington and its European allies from meaningful regional influence in that zone.

Too many people in Washington and elsewhere persist in the delusion that Putin is a mere tactician who is making it up as he goes along. But the orchestration of the combined military and non-military pressures upon all the actors within the area in question reveal the outlines of a grand design coming into full view.

The consequences of this Russian strategic operation are quite clear. If NATO cannot effectively defend the Caucasus or connect to it, Georgia’s NATO option becomes meaningless. Since NATO remains unwilling to accept Georgia as a member, the application will become an empty ritual, a check that cannot and will not be cashed.

Both Georgia and Azerbaijan could be pressured to join the Eurasian Economic Union and CSTO. Energy connections to Turkey and Europe could wither under Russian pressure and European disinterest. Russia could impose its version of a peace in Nagorno-Karabakh that enshrines it as the sole regional hegemon but that is unlikely to satisfy either Baku or Yerevan or eliminate the causes of conflict. Meanwhile, the West would be out of the picture and the Caucasus would be a springboard for the ongoing enhancement of Russian and possibly Iranian influence across the Middle East.

The Kurdish and other ethnic minorities throughout this zone would be levers for Moscow to use as it already has done for over a century to place pressure on the Turkish and South Caucasian governments who will gradually be supplanted in the Caucasus by more openly pro-Moscow players who benefit materially as well as politically from their close ties to Moscow, something that is already visible in Armenia’s new government. At the same time, the West will be gradually marginalized here both strategically and economically, particularly in regard to getting energy from non-Russian sources in any appreciable quantity.

While this result would owe much to the assiduity with which Russia is pursuing its imperial vision, it would also be due in large measure to Western apathy, ignorance, and lack of strategic insight or concern about the Caucasus, a trend that has marked both European and U.S. policy for the period since the Georgian war in 2008 if not earlier.

It is high time that Western governments awoke to what is happening in the Caucasus and the tendencies for either resumed violence or the threat thereof, as well as the threat to Turkish solidarity with NATO and the West. It is quite clear that the Obama Administration has paid far too little attention to the South Caucasus and continues to remain oblivious to anything except Azerbaijan’s well-known human rights problems. Azerbaijan, to be sure, is no democracy, but neither is Armenia or Russia. If Baku, Tbilisi, and Yerevan lose more of their sovereignty, they will have lost not only the right to actual, as opposed to notional, self-determination; they will have lost any capacity to reform themselves given Moscow’s vigilant supervision of their policies.

At the same time, the West will have lost any chance to influence domestic trends in any of these countries let alone challenge the spread of Putinism abroad and the creation of a huge Russian sphere of influence in the “energy ellipse.” Not only is there an acute and urgent need for Western leaders to grasp what is at stake in Syria, they also need to see the big picture and the connection to the Transcaucasus as well as its impact upon their security in order to take purposeful steps to reassert Western influence here.

CONCLUSIONS: Azerbaijan and Georgia are clearly pro-Western states that, whatever their shortcomings, want to identify and cooperate with the West. Neglecting them or chastising them without offering any positive policies except being told to wait patiently leaves them with no option and validates Moscow’s insistent refrain that the West “will not take you.” This neglect not only undermines Western strategic interests connected with Turkey and preventing the recrudescence of a Russian empire in Eurasia, it also undermines any possibility down the road for liberalizing reforms in these countries. Absent security, there is little or no future for democratic reform and leaving it to Russia to provide that security is hardly an adequate answer under the circumstances. Therefore, every effort must be made to make sure that the next U.S. administration comes to see the strategic issues at stake in the “energy ellipse” clearly and acts vigorously, along with its allies and local regimes, to strengthen not just their sovereignty and security but also to bring about opportunities for Western values as well as Western interests.

More in this category: « Balochistan attacked again: what is Islamabad thinking? Armenia seeks to boost its role in the Iran-Georgia gas talks »
back to top