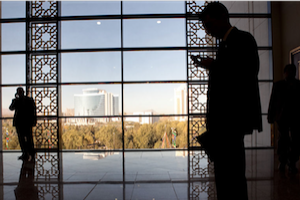 BACKGROUND: The idea of the “Silk Road” is an often used metaphor to illustrate the pivotal geographical position of the countries of Central Asia, situated mid-way between the bustling regions of East and West, North and South. But the traffic that followed the desert and mountain trails which Marco Polo explored along with the silk traders of the Thirteenth century have little in common with the technologically advanced thoroughfares of today.  The most advanced of these thoroughfares is modern telephony. As the engineering community prepares for the transition to the next stage in rapidly evolving telecommunications technology, political leaders are scrambling to take advantage of the new super-fast, wide-spectrum, fiber-wireless mobile 5G network. If 5G lives up to the expectations of the cyber visionaries promoting this new use of the electromagnetic spectrum, it will permit unprecedented transfer rates and create an entirely new level of connectivity with the internet-of-things and mobile devices.

Ignoring the new 5G technology threatens to leave the Central Asian countries further behind in the race to overcome the digital divide. The 5G transition has great importance for the developing world because it renders information and communication cheaper and more affordable by intensifying informatized economic activity. Yet the expansion of the Silk Road with massive investments in this cutting-edge technology will come at vast expense—something none of the Central Asian states currently will be able to bear by themselves. This situation naturally turns attention to the newly established Asian Infrastructure Investment Bank (AIIB).

IMPLICATIONS: The rising tide of the “Asian Century” has wrought profound economic changes defining new commercial and political connections throughout the entire Asian region. The pace of economic change throughout Asian countries has created immense infrastructure needs to facilitate changes in transportation, energy and communication.  China’s peaceful rise and economic extension into Central Asia has in a very short time created vast new opportunities. But to date China’s infrastructure projects in highways, rail, and ports have been the results almost exclusively of bilateral agreements. In contrast to road projects, telecommunications projects are inherently regional in scope and scale. China’s leading role in the establishment of the AIIB signals a new era in the dynamic transformation underway throughout Asia. All of the Central Asian states except Turkmenistan were quick to respond to the AIIB’s invitation to become founding members.  However, the two largest shareholders in the Asian Development Bank, that is the U.S. and Japan, did not join the AIIB.

The world’s leading international financial institutions (IFIs) at work in the Central Asian countries – the World Bank, the International Monetary Fund, and the Asian Development Bank – have sought to mobilize capital for development and, at the same time, establish a virtuous circle of change, promoting good governance, fiscal accountability, environmental protection, human rights, and social equity. But many of the IFIs have been criticized for not working boldly and swiftly enough to meet the region’s development challenges. The management of the AIIB has pledged to join the world’s other major multilateral lending investment institutions in bringing major public international infrastructure rapidly into line with national development agendas, regional developments and private commercial interests. When the AIIB’s first Central Asian loan projects are announced in the months ahead, telecommunications is almost certain to be one of them.

Some see the AIIB as a consequence of growing pressures on China to move from the export-oriented foreign trade policy which was successful in the first era of post-communist transition to a more balanced foreign macroeconomic posture. Over the past three decades, the exchange value of the Chinese Yuan was tied to export-led growth priorities. During this period, China’s central bank managed exchange values in order to encourage exports through discouraging domestic consumer markets. The advantages inherent in this centrally managed exchange rate are now being increasingly eroded by western stimulus policies.  Chinese economic authorities have recognized the importance of shifting from domestic infrastructure investment priorities to priorities oriented towards promoting international infrastructure. The role of currency is key in this transition. For the past two years, China’s central bank managers have been publically discussing mechanisms to undertake the gradual shift to a fully-tradable currency such that the Yuan could be openly exchanged in secondary markets independent of central bank managers. The IMF has announced its acceptance as one of the currencies that make up the IMF’s Special Drawing Rights.

CONCLUSIONS: Political leaders in Central Asia broadly recognize the double-edged aspects of globalization in contemporary cyberspace – countries that fail to embrace new telecommunications technologies are not likely to compete effectively in the technology-dependent world, and yet those countries that adopt the new telecommunications technologies may find they have to adapt to the political consequences of their decisions. Countries such as Kazakhstan are keen to avoid slipping back into the role of primary commodity suppliers for their larger neighbors. High-tech development and such sectors as contemporary banking and services now depend on up-to-date telecommunications. High tech opportunities come with risks.

AUTHORS’ BIOS: Kairat Bekov is Lecturer in the School of International Relations of Al-Farabi Kazakh National University. Gregory Gleason is Professor Emeritus at the University of New Mexico and Professor at the George C. Marshall European Center for Security Studies. The views expressed here are those of the authors and do not represent those of their employers.