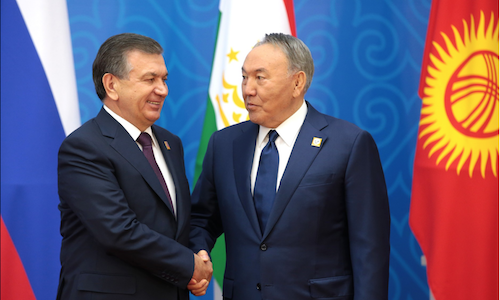 BACKGROUND: Since regaining independence, Uzbekistan, Kazakhstan and other Central Asian and South Caucasus countries have cooperated closely with the U.S. and additional international partners to consolidate, close, and clean former WMD-related facilities as well as prevent illicit movement of WMD-related materials. The contributions of Uzbekistan and Kazakhstan are important given the two countries’ regional influence, legacy Soviet-era WMD programs, and proximity to countries with large nuclear, biological, and chemical sectors.

Tashkent and Astana have sustained the legally binding arms control and nonproliferation obligations that they inherited from the former USSR, such as the 1970 Treaty on the Non-Proliferation of Nuclear Weapons. They have also become parties to additional counter-WMD proliferation and disarmament treaties and agreements like the 1997 Convention on the Prohibition of the Development, Production, Stockpiling and Use of Chemical Weapons and on their Destruction. Uzbekistan and Kazakhstan have both placed their research reactors under the enhanced safeguards and monitoring of the International Atomic Energy Agency (IAEA). Kazakhstan has joined the Nuclear Suppliers Group and affirmed its Additional Protocol to its nuclear safeguards agreement with the IAEA.

Uzbekistan and Kazakhstan have pursued their own regional nonproliferation initiatives. In particular, they joined with Kyrgyzstan, Tajikistan, and Turkmenistan in signing the Central Asian Nuclear Weapons Free Zone, which prohibits the development, manufacture, stockpiling, acquisition, or possession of any nuclear explosive device within their region. Former UN Secretary-General Ban Ki-Moon observed that, “The experience of Central Asia, the only zone where nuclear weapons were once present, serves as an example to other states aspiring to create such zones.”

Kazakhstan has become a leader of the global movement against nuclear weapons testing, partly due to its horrific experience hosting the Soviet Union’s main test site at Semipalatinsk. U.S. and other international programs have enhanced security at the site, which has substantial radioactive by-products from the Soviet era. The Kazak authorities hold periodic events at the site aimed at promoting the entry into force of the Comprehensive Test Ban Treaty. President Nursultan Nazarbayev has used his attendance at the Nuclear Security Summits to launch several disarmament, nonproliferation, and nuclear security initiatives.

Uzbekistan and Kazakhstan have consistently discouraged Iranian and North Korean nuclear weapons aspirations. Almaty hosted two rounds of the “P5+1” (all five permanent UN Security Council members and Germany) talks that led to a nuclear deal with Iran. Uzbekistan and Kazakhstan have backed this Joint Comprehensive Plan of Action regarding Iran as a means of avoiding further nuclear weapons states in Eurasia.

While defending the right of other countries to peaceful nuclear programs, Nazarbayev and other Kazakh officials have urged Iran and North Korea to follow Astana’s example, renounce any nuclear weapons aspirations, and recognize that their safety depends on improving economic and diplomatic ties with other countries. Uzbek officials have condemned North Korea’s nuclear weapons program as a threat to Central Asia.”

IMPLICATIONS: Several factors explain why Uzbekistan and Kazakhstan prioritize nuclear nonproliferation and security. First, both were exploited as WMD suppliers and test beds during the Soviet period. Second, they face serious threats from terrorists, criminals, and other non-state actors seeking WMD materials and technologies. Third, Uzbekistan and Kazakhstan can enhance their global reputation and status through their contributions to international security. Finally, both countries aspire to expand their role in international nuclear energy, chemical, and biotechnology markets. Tashkent and Astana therefore want to reassure others that they are responsible suppliers and will avert WMD incidents or accidents.

Under its new President Shavkat Mirziyoyev, the Uzbek government has intensified opposition to WMD proliferation, called for more nuclear free regions, and pursued measures against WMD trafficking and terrorism. For example, President Mirziyoyev supported creating a nuclear-weapons-free zone in the Middle East while speaking at the 2016 session of the Council of Foreign Ministers of the Organization of Islamic Cooperation. Moreover, he called on North Korea to abstain from nuclear weapons when visiting Seoul last year. In line with his commitment to both nonproliferation and enhanced regional cooperation within Central Asia, Mirziyoyev has praised Kazakhstan’s leading efforts for nuclear disarmament and nonproliferation.

In August 2017, Kazakhstan opened the world’s first international nuclear “fuel bank” at Oskemen, the capital of the Eastern Kazakhstan region. Under IAEA supervision and with US$ 150 million in initial funding provided by the U.S. and others, the bank will store up to 90 tons of low-enriched uranium (LEU). The hope is that countries pursuing peaceful nuclear energy programs will borrow LEU fuel from banks to avoid the ecological and economic expense of manufacturing their own nuclear fuel through uranium enrichment, a technology that can be misused to make nuclear weapons.

The U.S. National Nuclear Security Administration (NNSA), Department of State, and other U.S. government agencies have assisted Uzbekistan and Kazakhstan with various threat-reduction programs. These agencies have helped them decrease the amount of WMD items inherited from the Soviet Union, store remaining dangerous agents with greater security, strengthen their borders against illicit radiological trafficking, and tighten controls on the export of dangerous nuclear, biological, and chemical agents. Regarding biological security, the USAID TB Control Program has been working with Uzbekistan’s Ministry of Health to address a Multidrug-resistant tuberculosis epidemic.

The Trump administration has sustained this vital nonproliferation partnership. In August 2017, the U.S and Uzbek governments signed a memorandum of understanding (MOU), based on their bilateral April 2012 Counter Nuclear Smuggling Joint Action Plan, which pledged greater cooperation in preventing nuclear terrorism and trafficking. For instance, the MOU will expand collaboration between the NNSA and the Uzbek State Customs Committee, providing U.S. support, equipment, and other assistance in tracking and detecting smuggled radiological materials.

Last month, Kazakhstan, which is serving a two-year term on the UN Security Council, made nonproliferation a priority of its rotating Council presidency and convened a special session on promoting WMD-related confidence-building measures. Kazakh diplomats have strived to narrow differences between the U.S., Russia, and other Council members on WMD issues. During Nazarbayev’s White House visit last month, his first trip to the U.S. since the 2016 Nuclear Security Summit, Trump called Kazakhstan “a valued partner in our efforts to rid the Korean peninsula of nuclear weapons.” Citing his country’s strong nonproliferation record, Nazarbayev said that, “Kazakhstan has the moral right to talk to the nations that are seeking nuclear weapons. And this is the way we’re talking to Iran, and this is the way we will be talking to North Korea.”

CONCLUSION: Future U.S. steps to counter WMD terrorism and proliferation in Central Asia should include measures to improve policy coordination between the U.S. and EU. Due to limited resources, these Western governments, which have traditionally funded the bulk of the counter-WMD initiatives in Central Asia, must also engage more deeply with India, China, and other partners that can provide additional support to this critical endeavor of keeping the world’s most dangerous materials away from terrorists and rogue regimes.

AUTHOR’S BIO: Dr. Richard Weitz is a Senior Fellow and Director of the Hudson Institute Center for Political-Military Analysis.

More in this category: « Pakistan in the SCO: Challenges and Prospects Protest Activity Grows in the North Caucasus Republics »
back to top