Pakistan in the SCO: Challenges and Prospects

The Shanghai Cooperation Organization’s (SCO) Council of Heads of Government (CHG) held its 16th meeting on November 30-December 1, 2017. Pakistan’s PM Shahid Khaqan Abbasi highlighted the pivotal role that Islamabad can play in achieving the SCO’s objectives by serving as a bridge between Central and South Asia. However, in order to realize the potential benefits of Pakistan’s SCO membership, Islamabad needs to intensify its public diplomacy and improve its standing among the other member states by aligning its policy with other regional powers. Is Islamabad ready to do this? 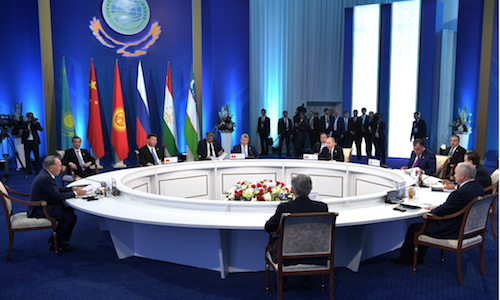 BACKGROUND: As Pakistan became an SCO member on June 9, 2017, Islamabad described this as an opportunity to improve its relations with the regional countries by facilitating trade through the Gwadar port, contributing to a regional solution to the Afghanistan issue, addressing its worsening energy crisis, as well as learning from and contributing to the SCO’s Regional Anti-Terrorist Structure (RATS).

The SCO has emerged as a major player in regional and global affairs. A number of Western, and especially U.S. scholars, view the SCO as a challenge to U.S. interests. Some have described it as the beginning of a new organization resembling the Warsaw Pact (or a “NATO of the East”). The SCO emerged out of the Shanghai Five, created in 1996 with China, Russia, Kyrgyzstan, Kazakhstan and Tajikistan as founding members. In 2001, the Shanghai Five was expanded and renamed SCO with the inclusion of Uzbekistan. In 2005, Pakistan, India, Iran and Mongolia joined as observers.

In the past, both China and Russia have repeatedly stated that the organization would not incorporate new members despite Pakistan and India’s active campaign for SCO membership. However, this attitude changed in recent years; while Moscow supported New Delhi’s bid for membership, Beijing, arguably the main player in the SCO, supported Islamabad’s bid. At the 2015 summit at Ufa, Russia, the SCO reached and announced its decision to include Pakistan and India as members. In 2016, India and Pakistan signed a memorandum of obligation. During the 17th SCO summit in Kazakhstan’s capital Astana, President Nursultan Nazarbayev formally welcomed Pakistan and India as SCO members.

This development in the SCO’s history raises several important questions, including how it will affect the SCO’s ability to function as a regional alliance; to what extent the inclusion of new members indicates a power struggle between Moscow and Beijing; how deep rooted this struggle is and how it will affect the SCO. Yet from Islamabad’s perspective, the main question is what it can offer the SCO and what it can gain from its membership in the organization.

IMPLICATIONS: Islamabad faces a number of challenges at the regional and international levels and its SCO membership can be of help in addressing these challenges. Recently, Islamabad’s relations with Moscow have improved. After the meeting between PM Abbasi and Russian PM Medvedev on the sidelines of the SCO meeting, both expressed satisfaction with the evolution of bilateral relations including in defense cooperation. Other cases in point include Russia’s recent support for Islamabad’s positions on membership in the Nuclear Suppliers Group and terrorist sanctuaries on the Afghan side of the Durand line. Islamabad’s SCO membership will provide an opportunity to expand this bilateral relationship through the SCO platform, especially in the defense sector.

Islamabad, Moscow, Tehran and Beijing are all seriously concerned over the emergence of the terrorist organization known as the Islamic State in Iraq and Syria (ISIS) and the future of Afghanistan. Both these issues impede positive development across the region. Since all SCO member states have interests in Afghanistan and support different groups in the country, it is imperative that using the SCO platform, these states develop a joint strategy to address the Afghanistan problem and ISIS threat.

Pakistan provides natural link and route for other SCO members to access the Indian Ocean. As Pakistan’s former Prime Minister Nawaz Sharif aptly pointed out: “Pakistan provides the natural link between the SCO states to connect the Eurasian heartland with the Arabian Sea and South Asia … We offer the critical overland routes and connectivity for mutually beneficial trade and energy transactions intra-regionally and inter-regionally.” While this prospect provides immense opportunities for all SCO members, it also indicates a challenge for Islamabad. Despite immense potential, Islamabad’s trade and economic relations with most SCO members, aside from China, are minimal. The SCO membership will provide Islamabad with an opportunity to initiate and revive a number of projects using the SCO platform.

Gwadar port stands to become an important and effective trade outlet for the Central Asian States. Under the SCO banner Islamabad can provide SCO member states with preferential access to Gwadar.

Pakistan’s mounting energy crisis needs immediate attention. Islamabad has so far failed to tackle it, but is developing an energy policy to address the problem. SCO membership provides Islamabad with an avenue to explore opportunities for importing oil and gas from the Central Asian states, primarily Uzbekistan, Tajikistan and Kazakhstan.

An important question is whether Indo-Pak rivalry will find another venue in the SCO. Will New Delhi and Islamabad be able to act maturely and adopt the SCO’s spirit of regionalism? At the SCO summit in June 2017, Pakistan’s former PM Sharif agreed with and welcomed a proposal made by Bottom of FormChinese President Xi Jinping on a five-year treaty for good neighborliness among SCO members. Conversely, India’s PM Narendra Modi used this forum to continue his policy of isolating Pakistan in his first speech as an SCO member. It has been pointed out that importing this conflict into the SCO risks impeding the functioning of the organization, as has been the case with the South Asian Association for Regional Cooperation.

Yet contrary to general perception, India may not be able to use the SCO platform effectively against Pakistan. China is the SCO’s key member, and India-China relations are defined by strategic competition and security concerns. After the Doklam crisis, another military confrontation between the two cannot be entirely ruled out. It is well-documented that China was reluctant to grant India SCO membership. On its part, India is extremely critical of the China Pakistan Economic Corridor (CPEC) as well as China’s Belt and Road Initiative. While India can use the SCO to voice its concerns over Islamabad’s alleged support for terrorism in India, China has so far supported Pakistan on this issue, including through its recent veto to a UN resolution designating Masood Azhar of Jaish-e-Muhammad a wanted terrorist. It is unlikely that China would act otherwise in the SCO. India also needs to exercise caution in using the SCO to highlight the Kashmir problem, as China can raise the Tibet issue and India’s sheltering of the Dalai Lama in response.

For these reasons, India’s SCO membership will not increase its ability to put pressure on Pakistan. Moreover, if Pakistan’s relations with Russia improve further and China, Russia and Pakistan can reach an understanding on Afghanistan and the U.S. presence there, India would have to tread even more carefully as it would then have to decide which side to join and would risk losing its primary supporter in the SCO.

CONCLUSIONS: The SCO is an important regional alliance. The inclusion of Islamabad provides the SCO with a link and route to South Asia and to the Indian Ocean. China, along with its SCO partners, is developing and implementing the Silk World order. The One Belt One Road Initiative, of which CPEC is an integral part, is a manifestation of this order. As a pivotal South Asian state, Pakistan can contribute positively to the SCO as well as learn from it. Yet before such a contribution is possible, Islamabad needs to reach out to the other SCO member states, with which it shares historical and cultural ties, to improve relations and then develop a regional understanding on issues vital for all SCO members including on Afghanistan, Islamic radicalization and drugs. Whether Islamabad will be able to meaningfully integrate into this regional block largely depends on overcoming this final obstacle.

AUTHOR’S BIO: Rizwan Zeb, Ph.D., is associate editor of Journal of Asian Security and International Affairs (Sage). He is a former Benjamin Meaker professor, University of Bristol, UK; and visiting scholar of the India-South Asia Project, Foreign Policy program of the Brookings Institution, Washington DC, USA. He is also a consulting editor of the soon-to-be-launched weekly e-paper Pakistan Review. He tweets at @SRizwanZeb.

More in this category: « Leadership Change in Dagestan Deepening Central Asian Nonproliferation Partnerships »
back to top