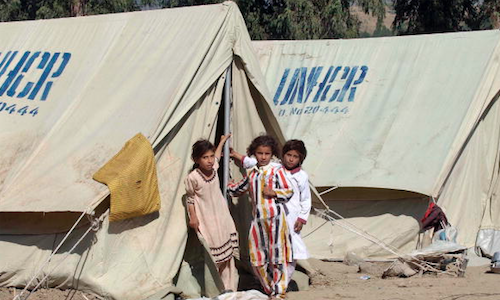 BACKGROUND: Afghans have been fleeing the fighting in their country for almost four decades. A large number, mainly Pashtuns, fled across the border into Pakistan. While strong ethnic links between Afghan and Pakistani Pashtuns eased the integration of the refugees with the host population, conflicts – frequently violent – did erupt over employment, resources, control over the drug trade, etc. The costs of supporting a large refugee population were immense, although the United Nations High Commissioner for Refugees (UNHCR) shouldered the bulk of this burden. Still for decades, Pakistan did not force the refugees to leave. Their value as a strategic tool – it was from the Afghan refugee camps that Pakistan’s Inter-Services Intelligence recruited thousands of fighters for the anti-Soviet jihad, and subsequently into the Taliban and other armed militias – probably motivated Pakistan to avoid forced repatriation.

The repatriation of Afghan refugees gathered momentum after the fall of the Taliban in 2001. While many returned voluntarily, there was an element of pressure as well. International donors and UN agencies saw the repatriation of refugees as a way to showcase the “normalcy” they had brought to Afghanistan. Refugees were therefore urged to return home. Repatriations have nevertheless slowed considerably since 2007, as the deteriorating security situation in Afghanistan has prompted many refugees to reconsider their plans to return home.

However, since the end of 2014, the situation of the refugees in Pakistan has become extremely tenuous. Anti-Afghan sentiment surged in Pakistan following an attack on an army-run school in Peshawar by the Tehreek-e-Taliban Pakistan, which is believed to operate from bases in Afghanistan, in December 2014. The government launched a crackdown on refugees. Rules for their continued stay in Pakistan were tightened, refugees’ homes were raided and they were denied jobs and homes. In December 2015, the government issued an ultimatum. Afghan refugees had six months to leave Pakistan or face deportation. The deadline has been extended twice since and the latest date is set for March 31.

IMPLICATIONS: Pakistan has set deadlines for Afghan refugees to leave also in the past. But these deadlines were long-term and rarely enforced. This time, Pakistan’s government seems serious. It is determined to send the refugees back to Afghanistan whether they want to leave or not, and regardless whether the situation in that country is conducive for their safe return. Its deteriorating relations with Afghanistan is said to be behind Pakistan’s new resolve.

Although bilateral relations warmed considerably when Ashraf Ghani became Afghanistan’s president in September 2014 – Ghani even signed a pact with Pakistan to deepen co-operation between their intelligence agencies – the relationship soured within a year. Pakistan’s reluctance to support the Afghan peace process and its alleged continuing support for terrorist attacks in Afghanistan prompted Ghani to reach out to Pakistan’s arch-rival India, resulting in a sharp increase in India’s influence in Afghanistan. Much to Pakistan’s chagrin, Ghani revived a suspended request for Indian military hardware, which resulted in India supplying Kabul with attack aircraft. Additionally, Ghani came out in strong support of India’s “surgical strikes” on terrorist camps based in Pakistan-administered Kashmir and supported the Indian government’s effort to isolate Pakistan over its support for terrorist attacks in other countries.

This is said to have reinforced Pakistan’s resolve to teaching Afghanistan a lesson by sending back the Afghan refugees, although Kabul is hardly in a position to support them financially.

Between July and mid-December 2016, over half a million Afghan refugees are said to have left Pakistan for Afghanistan. This is several times the number that left the previous year. Of the roughly three million Afghan refugees living in Pakistan, 1.6 million are “registered” and the rest are “undocumented.” Many of them came to Pakistan in the early 1980s. Several were born in Pakistan, married locals and have children who go to school in Pakistan. They have made a life for themselves in Pakistan and regard Pakistan as their home. Crossing the border into Afghanistan is hardly a “homecoming” for them. Importantly, the situation in Afghanistan is not conducive for the return of refugees. The security situation is precarious – 2016 saw record levels of civilians killed, injured and displaced – as is the state of the economy. Much uncertainty over access to food, jobs and shelter awaits the returnees.

Unlike during the post-2001 period, when hope drew the refugees back to Afghanistan, the current exodus it is driven by intimidation, coercion, violence and ultimatums that they are subjected to in Pakistan. Afghan refugees are being forcibly repatriated to Afghanistan.

The 1951 Convention forbids refoulement, i.e. forcibly returning registered refugees. As a non-signatory to the 1951 Convention, Pakistan could claim that it is not bound by this provision. However, international customary law also forbids sending back refugees “in any manner whatsoever” to a place where they face the risk of persecution or threats to their lives. By sending back the Afghan refugees, Pakistan is violating their right to non-refoulement.

Interestingly, the UNHCR’s extension of a US$ 400 aid package to registered Afghan refugees returning home is said to have encouraged Afghans to leave. While this repatriation program has been put on pause for some months, its likely revival on March 1, while providing returnees with some seed money to begin a new life in Afghanistan, is facilitating Pakistan’s forced repatriation of refugees. Human Rights Watch says that UNHCR will then be “complicit in mass refoulement.”

CONCLUSIONS: The ongoing repatriation of Pakistan-based Afghan refugees to Afghanistan is forced and therefore a violation of refugees’ right to non-refoulement. Rather than facilitate this repatriation, the UNHCR must do more to stop it, or at least slow it down, as the situation in Afghanistan is hardly secure. However, it will not be easy to convince Pakistan to do so especially as European countries that are signatories to the 1951 Convention are sending back Afghan refugees as well.

Since the region’s geo-politics and Afghanistan’s bonding with India prompted Pakistan to forcibly repatriate the Afghan refugees, Pakistan is unlikely to rethink its decision in the near future. Much will depend on how the Afghan-India military relationship evolves. The Afghan refugees are staring at an uncertain future.

More in this category: « Islamic State-inspired attacks continue in Chechnya China’s Long March into Central Asia: How Beijing Expands Military Influence in Tajikistan »
back to top