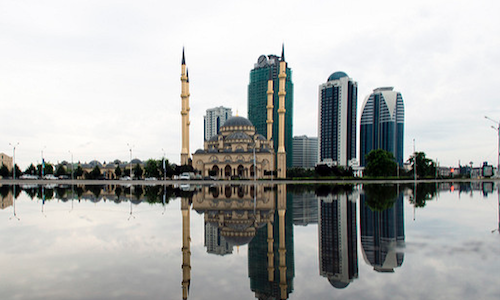 BACKGROUND: The shootout in downtown Grozny took place soon after a group of three males attacked and killed a police officer in central Grozny. The assailants took the police officer’s weapon and vehicle. In the evening, the group was spotted in the city center and all three militants were killed during the exchange of fire with security forces. The following night, four members of the same cell disarmed and murdered a member of Chechen police in a Grozny suburb. The same night, four militants broke into the house of another police officer and left with his weapon after having failed to locate the house owner. In the afternoon, militants ambushed and killed a second police officer and, like in the previous case, took his weapon and vehicle. All four militants were killed, along with one member of the security forces, when the group was found in the outskirts of Grozny. By the end of the day, security forces had managed to round up four remaining members of the militant cell, including one female.

On December 28, a video clip showing 11 individuals pledging allegiance to the head of ISIS, Abu Bakr al-Baghdadi, was posted on ISIS-affiliated websites and on YouTube. During a 14-minute video, young men vow to attack security forces not only in Chechnya, but also in other parts of Russia, particularly in Volgograd. All militants slain on December 17-18 appeared in the recording. Since the militants had no firearms before their attacks on police (the men in the video were only holding knives), it seems that the cell did not receive direct material support from either Chechen insurgents or ISIS. Unlike most previous insurgent attacks on security forces in Chechnya, the militants of the Grozny cell were primarily interested in ambushing lone police officers and capturing their weapons, rather than attacking police patrols or armed convoys. The police investigation revealed that none of the militants was known to have links with armed groups in Chechnya or elsewhere. The group was allegedly receiving orders over the Internet from a Syria-based Chechen Islamist, identified as Zelimkhan Bakharchiyev.

IMPLICATIONS: In contrast to neighboring Dagestan, which lost 56 people as a result of armed conflict only during the fall of 2016, Chechnya remained relatively calm throughout the year. Aside from the December 17-18 confrontation, three other conflict-related incidents that took place in the republic were rather low-profile cases, with no casualties among the security forces. However, each of the previous armed incidents involved individuals pledging allegiance to ISIS and, in two cases, unrelated to the Chechen militant underground.

Two general observations emerge from these developments. First, following the effective crackdown on Chechen Islamists by Ramzan Kadyrov’s security forces over the past ten years, members of Chechen militant groups tend to avoid confrontations with the police and prefer to retain a low profile. A number of Chechen militant leaders, who pledged allegiance to ISIS during 2014-15, were killed during special operations along with numerous killed or arrested rank-and-file members of militant groups. The return of “Syrian Chechens” – Chechen volunteers who travelled to Syria and Iraq to fight in the ranks of ISIS and other Jihadi groups – predicted by some analysts, has thus far had no notable effect on the security situation in the republic. Second, the December 2016 events in Grozny indicate that self-organized cells, possibly radicalized by online Jihadi propaganda and lacking a direct line of contact with either ISIS in the Middle East, or with the remnants of Chechen militants, seem to be the current trend in the republic. According to Chechen journalist Orkhan Jamal, interviewed by the Caucasus Knot, there are no active ISIS recruiters in Chechnya who would try to attract people with offers of financial or heavenly rewards. Rather, young men and women radicalize through social media and online propaganda.

After the Grozny CTO, security forces undertook a series of arrests of male relatives of the suspected militants. According to a source within the Chechen security forces, quoted by the Caucasus Knot, male relatives of slain insurgents were detained in order to protect them from blood revenge, which the families of the deceased police officers pledged to undertake. As reported by the Human Rights Analysis Center, over 100 people were held in custody for over two weeks. Most of the detained relatives were released by December 30. However, a large demonstration was organized in a village where one of the militants resided, demanding the eviction of the deceased militant’s family. The meeting was attended by officials from the Chechen Ministry of Interior and senior religious figures. The fact that broader circles of the Chechen public appear to support Kadyrov’s policy of collective punishment against families of suspected militants is yet another worrisome trend in the republic. The events of December 2016 show that the principle of collective punishment, first officially endorsed by Kadyrov in 2014, continues to be applied in practice.

CONCLUSIONS: Attacks by Islamist militants on security forces close to New Year’s Eve have been a common occurrence in the North Caucasus. For example, militants conducted a large-scale operation in Grozny in early December 2014, whereas militants opened fire on residents of Dagestan’s city of Derbent in December 2015. The December 2016 incident differs from previous confrontations in that it was organized and implemented not by well-armed and trained members of the armed underground, but by self-radicalized individuals, possibly inspired by ISIS propaganda. The other possible conclusion to be drawn from the December attack is that despite its failure to invigorate experienced Chechen Islamists, ISIS still succeeds in its social media recruitment among the Chechen youth.

AUTHOR'S BIO: Huseyn Aliyev is a conflict and area-studies expert currently based at the School of Interdisciplinary Area Studies, University of Oxford. Huseyn’s recent publications appeared in Security Dialogue, International Security, Journal of Strategic Studies and Studies of Terrorism and Political Violence.

More in this category: « The curious case of Chinese troops on Afghan soil Pakistan to repatriate Afghan refugees »
back to top