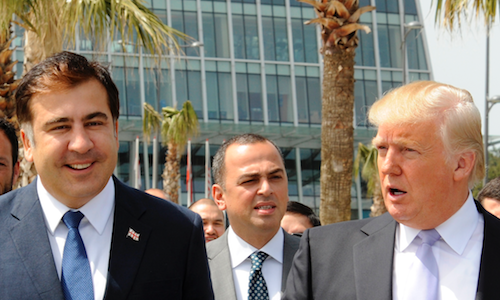 BACKGROUND: According to Georgian government documents, the main threats to Georgia are the Russian occupation of territory and the possibility of renewed aggression, instability in the Caucasus, terrorism from neighboring territories, cyber threats, and national and manmade disasters. Georgia’s main strategic priorities are therefore to protect its sovereignty and territorial integrity, attract international trade and transit, and seek further partnership with NATO and the EU.

The 2008 defeat in the five-day war with Russia exposed poor communications, logistics, and coordination by the Georgian Armed Forces. The Georgian military has since been rebuilt, but is still outmatched by Russia’s considerably larger forces. The government has found it difficult to maintain high levels of defense expenditures due to other economic challenges, but still spends a higher percentage of GDP on military matters than most NATO members.

Georgia, Azerbaijan, and Turkey have developed a strong economic and political partnership. Their trilateral projects include the Baku-Tbilisi-Ceyhan oil pipeline, the Baku-Tbilisi-Kars Railway, and the Eternity Military Drills. The three governments back each other’s territorial integrity and right to decide their membership in international organizations. Georgia’s economic ties to Iran, China, and the EU have also increased in recent years. The EU has become Georgia’s main trading partner, while economic ties with China are growing fast.

Though not a member of NATO, Georgia is a net security provider to the alliance. Georgia has participated in many NATO-led military exercises and several NATO missions, including in Kosovo and Afghanistan. Georgia has also engaged in critical NATO programs and initiatives such as the Annual National Program, Individual Partnership and Cooperation Program, NATO Georgia Professional Development Program, NATO Defense Education Enhancement Program, NATO Smart Defense Initiative, and the NATO Partnership for Peace program.

In addition, Georgia has allowed NATO militaries regular access to its territory and has modernized its national infrastructure to support allied operations. The military reforms Georgia made after the 2008 war and the opening of the NATO training center near Tbilisi have made Georgia better able to cooperate with NATO militaries. The 2008 decision to establish a special NATO-Georgia Commission underscores the value alliance members see in their collaboration. In 2014, the parties adopted a NATO-Georgia Substantial Package, which aims to strengthen Georgia’s security capabilities. Further cooperation is possible even if near-term Georgian membership in NATO is unlikely due to European opposition.

In 2009, the U.S. and Georgia established a Strategic Partnership that commits both countries to support Georgia’s economic development, democratic practices, sovereignty, and territorial integrity within internationally recognized frontiers. The U.S.-Georgia Strategic Partnership Commission has been the primary mechanism for promoting bilateral cooperation through its four groups: democracy; defense and security; economic, trade, and energy; and people-to-people and cultural exchanges. Successive U.S. administrations have sustained high expenditures for these projects due to the mutual security benefits they generate.

The Georgian-U.S. partnership against WMD trafficking has made considerable progress in keeping dangerous materials and weapons away from terrorists and rogue regimes. Yet, Georgia’s insecure northern borders and proximity to WMD assets in the Russian Federation make the country a prime smuggling route. With a limited navy, Georgia has been unable to effectively patrol its coastline. If Georgian authorities were to regain control over the Abkhazia and South Ossetia regions, however, they would be able to better control trafficking through the mountainous northern border.

IMPLICATIONS: Donald Trump made very positive comments about Georgia when he visited the country in 2012, but it is doubtful that the president-elect has given much thought to the improvement of bilateral ties after he assumes office next January. Many Georgians are uneasy about the prospects of a Russian-U.S. reconciliation at the expense of other Soviet former republics, but the two countries managed such concerns during the early Bush and Obama administrations, when the new U.S. teams strived to improve ties with Moscow. Some influential members of the current Georgian government agree with the view that reducing Russian security concerns could lead Moscow to relax its control over Georgia’s occupied regions of Abkhazia and South Ossetia.

With respect to the bilateral relationship, there are several ways the Trump administration and Congress can deepen security collaboration with Georgia in coming years. The July 2016 NATO heads-of-state summit in Warsaw praised Georgia’s many contributions to the alliance and pledged more training, exercises, and other military capability-building. Even if near-term NATO membership for Tbilisi is excluded, Georgia and the U.S. can deepen collaboration regarding cyber security, counterterrorism, regional security, and other diplomatic, defense, and non-military security issues.

The two governments should build on the Georgia-U.S. Memorandum on Deepening the Defense and Security Partnership signed earlier this year. The memo provides a general framework for future cooperation but needs specific follow-on accords to support concrete projects. To realize its goals, the U.S. should expand joint exercises, promote military exchanges, and pursue further training opportunities, and expand regional security cooperation.

The Trump administration should provide the Georgian Armed Forces with additional support for non-traditional missions like refugee management and countering trafficking in WMDs, narcotics, terrorism, and people. The U.S. should allow Georgia more opportunities to purchase defensive arms and technologies such as personnel protection equipment as well as logistical, medical, and communications systems. The new Georgian Defense Minister, Levan Izoria, has announced major personnel reforms – such as improving the combat capability of conscripts and optimizing command structures – that would benefit from greater U.S. and NATO assistance.

Due to its pivotal location, Georgia projects influence in the Black Sea, Caspian, and Caucasus regions, where the U.S. government’s presence is likely to remain limited. Both countries are eager to avert renewed fighting between Armenia and Azerbaijan or other regional conflicts that could escalate into a larger war. Since the government has decided against strengthening the country’s naval capabilities, Georgia needs enhanced capacity for border and port security to limit maritime trafficking and better respond to Black Sea threats.

Trump Administration officials will likely encourage Georgians to continue to embrace free market principles in order to generate more resources for cooperative projects and to diversify their economic ties to reduce foreign leverage on Georgia’s strategic autonomy. U.S. investors could also gain substantially from access to the Georgian market and the Georgian transit corridor between Europe and Asia.

The U.S. needs to raise its profile in Eurasia by engaging regularly with Georgian leaders in both Washington and Tbilisi. Senior Trump administration officials need to signal to Georgians and other audiences that Washington is committed to Georgia’s sovereignty, security, and right to choose its foreign alliances and partnerships. Meanwhile, Georgian officials should continue to renounce the use of force to recover their occupied territories. At the popular level, vigorous public information campaigns, cultural diplomacy, and exchange programs could help sustain public support in both countries for a strong U.S.-Georgian relationship.

CONCLUSION: The U.S. and Georgia are tied together by common values, including a mutual commitment to liberal democratic principles, national sovereignty, and territorial integrity. Even if assessed on a transactional basis, however, the Georgian-U.S. security partnership yields substantial mutual benefits in the form of geopolitical pluralism, counterterrorism, and counter-WMD proliferation. The Trump administration and Congress should undertake steps to keep the partnership substantial and mutually profitable to advance both countries’ shared interests.

More in this category: « New signs of Chinese military interest in Central Asia The curious case of Chinese troops on Afghan soil »
back to top