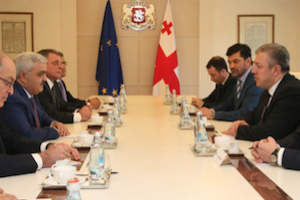 BACKGROUND: In September 2015, Georgian media reported on a meeting and negotiations on gas imports to Georgia from Russia between Kaladze and Gazprom CEO Alexei Miller. The source of the information was Gazprom’s web site. Three different arguments were presented to explain the need for negotiations. First, the transit agreement for Gazprom’s gas to Armenia is concluded on an annual basis and needed to be renegotiated. It was reported that Russia now demanded that Georgia agree on cash payments for transit, instead of the in-kind gas that Georgia has received for two decades. Second, Georgia needed to diversify its supply of gas and avoid dependence on a single source; understood as a diversification from Azerbaijani gas and that Gazprom was offering Georgia better commercial terms. Third, Georgia needed additional gas for the winter season that Azerbaijan could not supply; Georgia therefore had to negotiate a deal with Gazprom.

At different times, two different reasons were given for Azerbaijan’s alleged inability to supply Georgia with gas: Azerbaijan lacked extra gas for export to Georgia until 2019, when the second phase of the Shah-Deniz gas field is completed, and insufficient pipeline capacity to supply additional gas to Georgia for the winter season. Informally, it was also rumored that the Georgian side wanted to renegotiate the deal with SOCAR concluded in 2008-2009 on the supply of commercial gas.

The South Caucasus Pipeline currently allows Georgia to receive about 0.8 billion cubic meters (bcm) of natural gas from Azerbaijan’s Shah-Deniz gas field in the Caspian Sea near Baku, on very favorable terms negotiated during the development of the pipeline in the early 2000s. Georgia also receives 0.35 bcm of discounted gas based on a price negotiated between the two governments, and an additional 1.1 bcm on commercial terms averaging about US$ 260 per 1,000 cubic meters via a pipeline owned by the Azerbaijani State Oil Company SOCAR. This brings Georgia’s total import of gas from Azerbaijan to about 2.25 bcm.

Georgia also annually receives about 0.2 bcm of natural gas from Gazprom as a fee for allowing the transit of Russian gas to Armenia via Georgian territory. The agreement, reached in the mid-1990s, allows Georgia to receive 10 percent of the gas transited and is renewed annually. The pipeline transiting gas to Armenia has long been a target for acquisition by Gazprom. In addition to in-kind gas, Georgia reportedly bought an additional 75 mcm of gas from Gazprom in 2015.

In result, Georgia imported over 2.5 bcm of natural gas in 2015, and close to 90 percent of the gas consumed in Georgia came from Azerbaijan. This reflects a significant growth of consumption in recent years. One of the triggers of greater natural gas consumption in 2015 was the newly commissioned 230MW Combined Cycle Gas Turbine power station at Gardabani, inaugurated in July 2015.

It was understood that Azerbaijan’s ability to supply significant amounts of additional natural gas to Georgia would be limited until 2019, unless Azerbaijan decided to do so at the expense of its own consumption. Azerbaijan made such a decision in the winter of 2006, when Georgia faced an emergency after supply from Russia was cut off.

IMPLICATIONS: Georgia needs close to 11 mcm of natural gas daily during the winter season, for electricity generation as well as household consumption, whereas the country sometimes consumes only 4 mcm a day during summer. Georgia has a significant hydro resource but only utilizes a minor fraction of it, making Georgia’s energy balance heavily dependent on import. While hydropower contributes the majority of electricity used in Georgia, the seasonality of production increases its dependence on imported gas and electricity for the winter months. It was the growing demand for the winter season that prompted Georgian officials to look at short to medium-term supply options over the next few years, before 2019. This was the argument behind discussions not only with Gazprom, but also with Iran, regarding the supply of natural gas.

Azerbaijan’s natural gas consumption is also greater in the winter months, but it could easily supply additional gas during the summer if Georgia had a natural gas storage facility. In fact, the United States Trade and Development Agency (USTDA) funded a feasibility study in 2002-2003 for the development of underground natural gas storage in Georgia, but that project was never carried out by the Georgian authorities. If Georgia had a storage facility and gas could be stored during the summer months, this would eliminate or decrease (depending on the size of the storage) the need for additional purchases from Russia or elsewhere.

The agreement reached on March 4, 2016, allows Georgia to receive an additional 500,000 mcm of natural gas annually from the South Caucasus Pipeline. Reportedly, it also offers Georgia better terms for gas purchases by commercial entities. Georgia may not need the entire additional volume for 2016, but going forward this will cover Georgia’s demand until the Shah Deniz II project operates at full scale in 2019.

It is also reported that Gazprom agreed to maintain in-kind payment for the gas supply to Armenia, which will allow Georgia to continue receiving 200,000 mcm of gas annually. Georgia’s ownership of the transit pipeline and Russia’s desire to maintain its natural gas market share in Armenia were two factors that helped Georgia during the negotiations. The alternative of Iranian gas supply to Armenia, and potentially to Georgia, is not an attractive option for Gazprom. By reaching mutually acceptable terms on gas supply, Georgia prevents Gazprom and Russia from achieving a double-edged goal: increasing Georgia’s dependence on Gazprom, while possibly creating tensions between Georgia and Azerbaijan.

Georgia could reduce its dependency on additional gas and electricity imports by accelerating the utilization of its vast hydro resources. This is an issue of both political and economic significance. In addition to providing a long-term renewable solution for the energy sector, local hydro energy could help improve the country’s balance of payments and remove the pressure on currency exchange rate by reducing imports. Experienced donor agencies with technical expertise and available financial mechanisms, including the risk guarantee schemes for producers of electricity, can help the government facilitate private investments in hydro power development.

Greater hydro-power production could also make Georgia a net exporter of electricity to the growing Turkish market and can, in collaboration with Turkey and Azerbaijan, facilitate the creation of a common Azerbaijani-Georgian-Turkish electricity system, open to the participation of other potential actors. This system can be gradually integrated into the European electricity market, thus strengthening integrational processes in the South Caucasus.

In terms of other local resources, the U.S.-based Frontera Resources recently announced the discovery of a deposit containing 5 trillion cubic meters of gas in Eastern Georgia. If technical and financial conditions allow even a partial recovery of gas from the deposit, this could significantly change Georgia’s energy balance. However, even in a very optimistic scenario, this will not happen in the next 2-3 years.

In general, the Georgian leadership needs to be mindful regarding the symbolism of an increased role for Gazprom or other Russian companies in Georgia, as well as the importance of perceptions raised by this prospect both domestically and internationally. Russian forces continue their occupation of Georgian territories. In January 2016, Russian troops held a large military exercise North of Tskhinvali, about 50 miles from Tbilisi. And Russia’s Foreign Minister recently voiced ungrounded allegations about an alleged ISIS training camp on Georgian territory, in the Pankisi Gorge. Statements like this usually mean increased pressure on Georgia in order to extract concessions on political and security-related issues. It is common knowledge in Europe and in the Russian neighborhood that dealings with Gazprom are never isolated economic issues, and have to be seen in their geopolitical context.

CONCLUSIONS: The new agreement between SOCAR and Georgia reaffirms the notion that the Azerbaijani-Georgian strategic energy partnership is the backbone of the political and economic sovereignty of both countries. Going forward, Georgia needs to facilitate the development of a series of hydro-power generation facilities of different scales, as well as the construction of an underground natural gas storage facility. The hydro energy will reduce Georgia’s dependency on imported gas, while underground storage will help Georgia and Azerbaijan to better manage natural gas supply to Georgian residential and commercial customers. Azerbaijan, Georgia and Turkey should focus more on collaboration in the electricity sector, which could increase energy security for all three countries, while strengthening regional collaboration.

More in this category: « Fighting in Nagorno-Karabakh and the ineffectiveness of the Minsk Group Russia recalibrates 201st base in Tajikistan »
back to top