At a June 20 meeting in Luxembourg, the EU’s foreign ministers again acknowledged Georgia’s eligibility for visa-free travel in the Schengen area for a short-stay. However, the country’s much-awaited exemption from visa requirements remains obscure.

At the end of last year, the European Commission (EC) issued the “Fourth progress report on Georgia’s implementation of the action plan on visa liberalization,” endorsing the country’s success in conducting legislative and policy reforms and praising its diligence in meeting institutional and organizational principles and procedures in line with European and international standards. 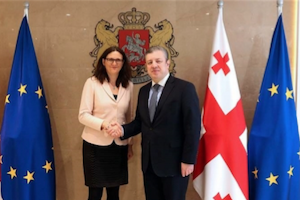 The visa liberalization (VL) process was thus was expected to be completed by mid-2016. Nevertheless, Germany’s objection during a meeting of the EU’s justice and home affairs ministers on June 9–10 reduced Tbilisi’s hopes to obtain a visa-waiver before the October 2016 parliamentary elections.

Germany seems keen to connect Georgia’s VL process to that of Ukraine and possibly Turkey. “It is not very easy to explain to one country how things are with another … however, I understand that each country wants to be treated on its own merits,” said German Chancellor Angela Merkel after meeting with Georgian PM Giorgi Kvirikashvili in Berlin on June 15.

Germany, along with France, Italy and Belgium, supports strengthening the so-called “suspension mechanism,” which could be applied to any visa free country. On May 20, 2016, the EU Council agreed to revise the proposal that makes it easier for member states to inform the Commission about circumstances possibly leading to a suspension of the visa-waiver. The initiative envisages an extension of the potential grounds for suspension as well as shorter reference periods and deadlines to enable quicker procedures. The specific circumstances allowing a member state to use suspension as a last resort, covers “a substantial and sudden increase in the number of irregular migrants, unfounded asylum requests or rejected readmissions applications.”

Since May 2016, German media has vigorously highlighted criminal activities of Georgian migrants and, drawing upon official data, claimed that the number of Georgian offenders has increased by 35 percent in a year, reaching 4,985 persons in 2015; while asylum seekers has grown from 527 in 2011 to 3,196 in the last year. The coverage, however, did not specify the share of crimes committed by Georgian migrants in Germany’s overall crime rate for the given period.

Nevertheless, a confidential police report offered a more profound picture. Leaked to the German newspaper Bild in February 2016, and excluding data from North Rhine-Westphalia – the state with the largest number of migrants, the report claimed that the actual number of crimes in Germany committed by immigrants during last year could exceed 400,000. Most of these crimes were committed by migrants from Syria, Albania, Kosovo, Serbia, Afghanistan, Iraq, Eritrea, Macedonia, Pakistan and Nigeria. As the report does not even mention Georgia, it can be assumed that the role of Georgian offenders in Germany’s overall crime rate is negligible.

Moreover, a report published by the European Commission in May 2015 included a comprehensive study by Commission staff on migration and security risks for the EU associated with Georgia’s VL. Based on factual analysis and statistics, the document concludes that although the EU is an attractive destination for Georgian migrants as well as Organized Criminal Groups (OCGs), triggering potential security risks, the migrant flows following a VL agreement would still remain limited due to Georgia’s small population.

Thus, the intensity of negative coverage about Georgian migrants in the German press could exaggerate the actual risks, and damage Georgia’s international reputation and its EU-integration perspectives.

Another important point is that VL was initially assumed to be a technical process but has gradually gained a clear geopolitical dimension. Georgia has met all the benchmarks outlined in the four separate “blocks” of the visa liberalization action plan (VLAP) that the EC presented to the government in 2013. The VLAP enclosed two phases envisaging legislative, policy and institutional reforms with sustainable and unremitting implementation.

Although all EU members, including Germany, recognize that Georgia has done its “homework” successfully and deserves a visa waiver status, the ongoing geopolitical turmoil complicates Tbilisi’s perspective of taking another historical step towards EU integration.

The situation was further adversely affected by the UK’s decision to leave EU. Brexit, the ongoing migration crisis and Germany’s critical stance towards Eastern Partnership countries has given rise to uncertainty both in the EU’s core and in its periphery. These circumstances, coupled with Georgia’s opaque perspective of VL, may stir further EU skepticism in Georgia, which is especially dangerous in light of the upcoming parliamentary elections.

More in this category: « Is Afghanistan's initiative to counter opium production failing farmers? Presidents of Armenia, Russia and Azerbaijan meet in St. Petersburg »
back to top