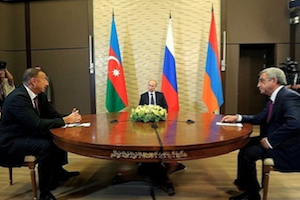 After the discussions, Sargsyan met with the Co-Chairs of the OSCE Minsk Group; Igor Popov, James Warlick, Pierre Andrieu and the Personal Representative of the OSCE Chairman-in-Office Andrzej Kasprzyk. In Saint Petersburg, Sargsyan also had a separate meeting with Putin for a discussion on issues pertaining to Russian-Armenian relations.

In his briefing after the Saint Petersburg meeting, Armenia’s Minister of Foreign Affairs Edward Nalbandian stressed the fact that Azerbaijan had organized large-scale military exercises while the presidents held talks in Saint Petersburg, which he deplored as an unconstructive approach towards the summit. On June 19-24, Azerbaijan conducted military exercises in regions bordering Armenia, including Nakhichevan. According to Azerbaijan’s Ministry of Defense, nearly 25,000 servicemen, more than 300 tanks and armored combat vehicles, over 100 rocket artillery launchers, up to 40 military aircraft and over 30 air defense systems, along with naval ships and special forces units were engaged in the exercises. Despite this fact, Nalbandian declared that the meeting had been quite useful.

The results of the Saint Petersburg meeting were interpreted quite differently in Azerbaijan. Novruz Mammadov, Head of the Department of Foreign Relations and Deputy Head of the Administration of the President of Azerbaijan, declared that the parties had agreed on a “step-by-step” solution to the conflict, which includes Armenia’s “concession of several territories” to Azerbaijan. Moreover, Mammadov stated that France and the U.S. are “comparably far from these processes,” and that considering the level of relations between Azerbaijan and Russia, the latter can play a key role in realizing this option.

Both Yerevan and Moscow issued immediate reactions to Mammadov’s statement. Nalbandian told Armenpress news agency that “not a single agreement on the settlement of the issue was reached at the Summit in St. Petersburg.” Russia’s response came on June 23, when Foreign Ministry Spokesperson Maria Zakharova stated during a briefing that “this is an attempt by Azerbaijan to interpret the agreements that have been reached in its own way” and qualified it as “loose interpretations or misrepresentations.”

According to analyst Sergey Markedonov, the meeting in Saint Petersburg was on the one hand intended to keep the format of negotiations alive and not let it fade away. On the other hand, it aimed to underline Russia’s special interest in solving the conflict, not outside the OSCE Minsk Group format but together with it. Above all, it was obvious that expectations for the summit were not very high, and that any considerable breakthrough in the peace process was therefore hardly anticipated.

More in this category: « Georgia's visa liberalization with the EU remains opaque Baku hosts Formula 1 Grand Prix of Europe »
back to top