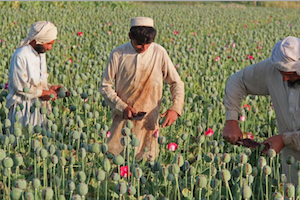 Counternarcotics policies and programs are no novelty in Afghanistan. In the past, both the Afghan government and the international community focused on forced eradication as a means for reducing the supply of opium, which nevertheless backfired. The focus then shifted to alternative livelihoods programs. For the most part, these programs were designed for poppy prone provinces predominately situated in the southern part of the country. While they initially seemed promising, a lack of coordination along with ineffective design and implementation indicated that a majority of these programs would not be sustainable due to their heavy dependence on aid.

In February 2007, the Good Performance Initiative (GPI) was created by the decree of Afghanistan’s president, to act as a development program within the MCN, with direct funding from the U.S. Department of State’s Bureau of International Narcotics and Law Enforcement Affairs (INL). The main objective of the initiative is to provide financial support to provinces in Afghanistan that have demonstrated commendable counternarcotics efforts. The GPI annually awards individual provinces US$ 1 million for achieving or maintaining a poppy-free status; US$ 1,000 for each hectare where poppy cultivation was reduced by more than 10 percent in the previous year; and US$ 500,000 each for up to two provinces that demonstrate outstanding counternarcotics achievements. According to the latest available figures, the INL allocated more than US$ 147 million in development assistance to Afghanistan between 2007 and 2014.

Since the establishment of the GPI in 2007, numerous projects were implemented in Afghanistan, mainly in construction, including but not limited to schools, university buildings including dorms and libraries, vocational training centers, drug treatment hospitals, irrigation projects, greenhouses, and bridges. Similarly to other programs designed to counter poppy cultivation and production, the GPI drew criticism for the absence of a proper monitoring mechanism that would allow evaluation and measure program performance. Critics also pointed out that projects funded by the GPI were often directed towards benefiting the provincial capital instead of directly benefiting the district and/or farmers who contributed to reducing cultivation either by creating a favorable environment or by switching to licit crops.

Seven years since its inception, the GPI was redesigned and reintroduced as GPI II. The program retained its main objective – providing financial support to provinces with a “good performance” on counternarcotics efforts by funding development projects at the provincial level. Yet unlike its predecessor, GPI II was expected to be more farmer-oriented and to emphasize support for alternative livelihoods, a move that was positively received. However, despite its redesign, out of all the projects under implementation in 25 of Afghanistan’s provinces, only three provinces are working on farmer-related projects such as the construction of a fruit market in Wardak and an irrigation system in Panjshir, and rehabilitation of irrigation structure in Nooristan. Remaining projects still mainly relate to construction, such as building classrooms, dormitories, bridges, and sport stadiums. Although they aim to contribute to overall provincial development, they often leave out farmers who find it increasingly difficult to support their households through purely licit livelihoods, and thus are more likely to turn to poppy cultivation.

The decreases in both opium poppy cultivation and average yield in 2015 suggest that more Afghan farmers could potentially be moving away from illicit to licit crop cultivation in the near future, if there is a favorable environment and programs that directly work with and benefit farmers in a sustainable manner. Future projects should be coordinated and selected through consultations with local communities and agricultural cooperatives to ensure that funds are directed towards improving the livelihoods of farmers. Otherwise, despite its recent redesign and its intended focus on providing support for alternative livelihoods, the GPI could once again fail to reach and benefit farmers directly.

More in this category: « Azerbaijani journalist released Georgia's visa liberalization with the EU remains opaque »
back to top