Japan as no “other”: Decolonizing Alternative for Central Asia?

Japan as no “other”: Decolonizing Alternative for Central Asia? 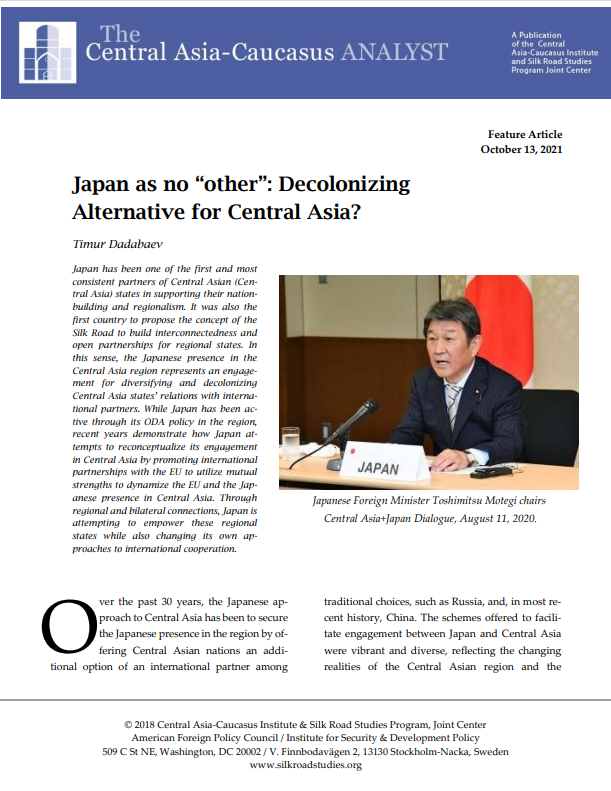 Over the past 30 years, the Japanese approach to Central Asia has been to secure the Japanese presence in the region by offering Central Asian nations an additional option of an international partner among traditional choices, such as Russia, and, in most recent history, China. The schemes offered to facilitate engagement between Japan and Central Asia were vibrant and diverse, reflecting the changing realities of the Central Asian region and the changing role and perception of the “self” in Japan. (1)  As is well documented in previous studies, the search for engagement schemes started with the 1996 Obuchi mission to Azerbaijan and Central Asia, spearheaded by the Member of Parliament and later Prime Minister Keizo Obuchi, which produced a strong endorsement of wider engagement of Japan in the region. It resulted in P.M. Ryutaro Hashimoto’s 1997 Eurasian/Silk Road Diplomacy speech, in which the concept of the Silk Road was first used as a geopolitical concept, embracing Central Asian states, China, Russia and Japan in an imagined net of interdependence(3).  While the administrations of P.M. Obuchi (1998-1999) and P.M. Yoshirō Mori (1999-2000) did not proactively engage with the Central Asia region, it was P.M. Junichiro Koizumi’s administration (2001-2006) that aimed to aggressively shake up the Japanese approach to this region by announcing the Central Asia + Japan Dialogue Forum, a set of annual inter-ministerial and high-level talks to support Central Asian regional integration and to facilitate a larger corporate presence for Japanese corporate interests, in the face of growing Chinese and Russian pressures. The particular importance of the Central Asia + Japan forum is that it offered an alternative option of a distant yet powerful external economic partner to the region, which did not display a neo-colonizing tendency or strive for domination, as was widely feared regarding China and Russia.(3)

Most recently, PM Shinzo Abe (2013-2020) attempted to further dynamize Central Asia-Japan relations when he visited all Central Asian states and lobbied for larger participation of Japanese corporations in Central Asia. In his approach to strengthening Japanese competitiveness, PM Abe introduced the notion of high-quality infrastructure by arguing that Japanese infrastructure projects based on high-quality and sustainability standards(4) offer more sustainable and reliable alternatives (as compared to Chinese projects, for example) for developing countries inclusive of Central Asia states.

Visions of the Region and Japanese Foreign Policy
In approaching Central Asia, the Japanese government utilizes both multilateral and bilateral channels, which include extending its support to individual state-building efforts and encouraging regional cooperation through Central Asia + Japan, as described above. In doing so, the Japanese government aims to display a certain degree of sensitivity toward disparities between regional states while facilitating long-term regional consolidation in light of growing pressures by other large players, such as China and Russia. In this sense, Japanese support for Central Asian states can be likened to Japanese support for nation- and regional-building in the ASEAN region.