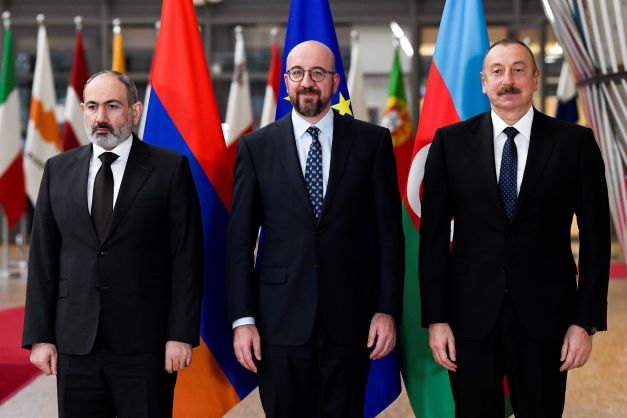 BACKGROUND: On December 14 last year, the President of the European Council Charles Michel organized a meeting with the President of Azerbaijan, Ilham Aliyev, and the Prime Minister of Armenia, Nikol Pashinyan. During the meeting, which was organized around a meal, he left the two leaders alone at the table for a time, marking the first instance when they had the opportunity for a one-on-one conversation since the end of the Second Karabakh War (also called the Forty-four Day War) in November 2020. Up until then, all recent meetings between the two sides had been conducted through Russian intermediation. The December meeting was followed by a February 4, 2022, video conference among the three plus French President Emmanuel Macron.

On March 11, Azerbaijan announced its transmittal to Armenia of five proposed items to form the basis of mutual relations. These items included: (1) mutual recognition of sovereignty, territorial integrity, inviolability of borders, and independence; (2) confirmation of absence of territorial claims now or in the future; (3) avoidance of security threats, including threats and use of force; (4) delimitation of the border and establishment of diplomatic relations; and (5) establishment of transportation lines, communication networks, and cooperation in other fields of interest.

A second face-to-face meeting with Michel’s participation was organized and held under his good offices on April 6. According to him, the two leaders agreed on a number of points at this second Brussels meeting. These were: (1) to instruct their foreign ministers to prepare a peace agreement, (2) to establish a joint commission to determine and mark the borders, (3) to find solutions to humanitarian problems as a confidence-building measure, (4) to support de-mining financially and with expert assistance, and (5) to find effective solutions for establishing road and railway connections.

On April 8, Russia’s foreign minister Sergei Lavrov noted that the U.S. and France have declined to discuss with Russia any issues relating to Karabakh. This declaration represents the interment of the meaningless OSCE Minsk Group, of which the three countries served as co-chairs. For three decades, the Minsk Group failed to generate a peaceful resolution of the conflict. Russia might appear to understand the bankruptcy of the Minsk Group, as Igor Khovayev, its Russian co-chair, has been given a new appointment was the new title of “Special Representative of the Minister of Foreign Affairs of the Russian Federation” for promoting the normalization of relations between Armenia and Azerbaijan.

IMPLICATIONS: Yet official Moscow—or at least some influential political circles there—do not appear interested in the speedy settlement of disputes in the South Caucasus or in the normalization of relations between Azerbaijan and Armenia. The geopolitical history of the region provides an explanation. After Persia’s defeat in the Russo-Persian wars of the early nineteenth century era, the Tsar was acknowledged as protector of the Christians in Persia. In practice, this meant that he resettled them in the South Caucasus. Thus numerous Armenians arrived from Persia and settled in today’s Nagorno-Karabakh, but also from the Ottoman empire to settle in Georgia’s Javakheti region where Armenians also still predominate, including Akhaltsikhe city and Akhalkalaki town. The latter was home to a Soviet, then Russian, military base for decades until its final transfer to Georgia in 2007.

Today Russia continues its long-term policy of using the ethnic Armenians in the South Caucasus as a pivot for projecting its own geopolitical influence. This means escalating the situation in Karabakh as a response to increasingly successful Western initiatives. There have been reports for some time that Russia distributes passports to ethnic Armenians in Karabakh. Russia started offering passports to residents of the Georgian territories of Abkhazia and South Ossetia as early as 2002, six years before its invasion of those territories. South Ossetia has recently moved to seek annexation by Russia.

Konstantin Zatulin, the first deputy chairman of the State Duma Committee on CIS Affairs, hinted in a February 22 interview that the analogous “model” of the so-called “Donetsk People’s Republic” (DPR) and “Lugansk People’s Republic” (LPR) could be applied to Azerbaijan’s Karabakh territory where Russian troops are located. In Ukraine, this method involved the creation of Russian-backed puppet governments, followed by the provocation of military clashes to justify declarations of “independence.” Pro-Russian elements in those regions consider such declarations as preliminary to annexation by Russia.

Further, on April 13, Margarita Simonyan, a Russian-born Russian citizen of Armenian extraction who is editor-in-chief of the Russian state-controlled media organization RT, endorsed the idea that Karabakh should “join” Russia. Since she does not represent the ministry of foreign affairs or defense, and since the statement was made almost off-hand on her Telegram account, it could be taken as an expression of personal opinion. However, this statement has not been condemned, denounced, or withdrawn by any Russian state official. It could therefore appear to some observers, and not without reason, as Russian state policy.

At a minimum, Simonyan’s statement must be taken as an expression of a certain climate of opinion in Moscow. Zatulin’s analogy to the DPR and LPR cannot be ignored. Moreover, at nearly the same time, some Armenian residents of Karabakh began to express similar reviews.

CONCLUSIONS: Simonyan’s words and the failure to retract them are either Russian state policy, or they are irresponsible. Whichever of these is the case; they significantly endanger the situation further, as they only encourage Armenian irredentism. Within a few days of Simonyan’s statement, Arayik Harutyunyan, the head of the self-proclaimed ethnic-Armenian political entity in the region of Azerbaijan where Russian “peacekeepers” are located, publicly endorsed “some relations with Russia in a direct vertical framework.” This contradicts the territorial integrity and inviolability of the borders of Azerbaijan, recognized by Armenia in 1992 as well as by four UN Security Council resolutions in 1993.

In the past, Russia invoked the precedent of Kosovo in order to seek to justify its annexation of Crimea and its recognition of Abkhazia and South Ossetia. This has given false hope to Yerevan and the self-proclaimed Armenian entity in Karabakh. However, self-determination does not always necessarily mean external self-determination and secession. The recent report of the Parliamentary Assembly of the Council of Europe underlined this fundament of international law by pointing out that “Nagorno-Karabakh region claimed the right to self-determination” (emphasis added).

Official Yerevan appears now to understand this. It was subsequently reported in April that Armenia had accepted Azerbaijan’s five points. Pashinyan confirmed this in a public speech in Yerevan. Yet radical voices from the global Armenian diaspora (which outnumbers the population of Armenia proper by a three-to-one ratio) do not wish to understand it. Azerbaijan maintains that all concerns and claims about the rights of Armenians in Karabakh, including those expressed by different sectors of the international community, should and will be addressed within the territorial integrity of Azerbaijan.

The crisis in Ukraine demonstrates yet again to the international community that the principle of territorial integrity is the keystone of international security.

The West needs to continue to encourage and facilitate direct interactions between Azerbaijan and Armenia. The West should be consistent with its approach to the principles of international law, maintaining the universality of the principle of territorial integrity without exception. This means that official Washington must act in a way that corresponds with the demands for peace of the actual population of Armenia, and not the vocal Armenian diaspora. It is a very good sign that U.S. diplomacy appears finally to recognize the new realities in the South Caucasus, including the death and burial of the Minsk Group. This is signaled by the State Department’s identification of Andrew Schofer no longer as the U.S. co-chair of the Minsk Group but rather with the new title of “Senior Advisor for Caucasus Negotiations” for the purpose of his trip to the region.

More in this category: « Kazakhstan: Evolving Challenges and Opportunties EU dashes Georgia's hopes for candidate country status »
back to top