Turkmenistan's Halk Maslahaty extraordinary session, scheduled for February 11, 2022, was expected with great expectations within the Turkmenistan expert community. Unlike formal and ritual phrases usually accompanying the event, President Gurbanguly Berdimuhamedow's rhetoric differed in this case. The proclaimed adoption of the strategy for the next 30 years was connected with the new leader, expectedly his son Serdar Berdimuhamedow. The Halk Maslahaty announced an extraordinary presidential elections for March 12, 2022, yet another step in the power transition in Turkmenistan. However, several external and internal as well as long- and short-term factors determined the timing of the transition. At the same time, the transition will not be fully accomplished as the current president does not fully step back from power. 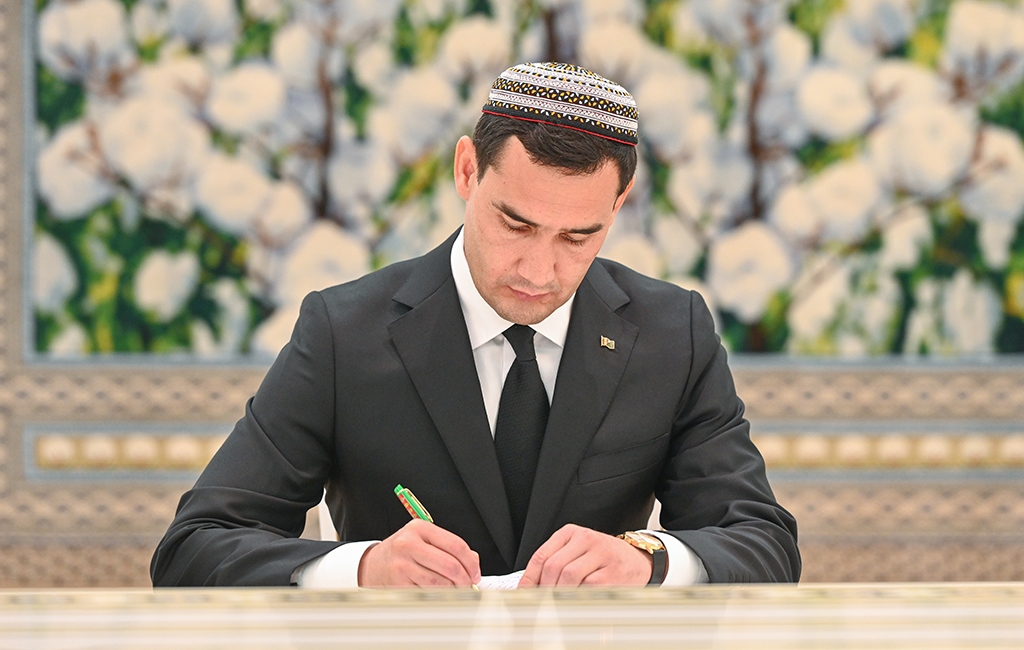 BACKGROUND: The grooming of the son of Turkmenistan’s second president started several years ago, as Serdar Berdimuhamedow returned from his studies in Moscow and Geneva and started his career in Turkmenistan’s state institutions. His promotion accelerated from 2019 onward, when he was shuffled through the different positions each year. He also strengthened his role in the formal constitutional system, starting from a member of Parliament to Deputy Prime Minister – in fact, the second position in the state. The constitution of Turkmenistan was reformed in 2016 with one substantial change, decreasing the age limit for the presidency to 40, the age that Serdar Berdimuhamedow achieved in 2021. Since then, Turkmen media started to dedicate more attention to his activities, widely seen as another sign of an upcoming power transfer. In parallel, he became increasingly involved at the international stage and was received as the genuine Head of State in many countries, mainly in the post-Soviet area.

Gurbanguly Berdimuhamedow (and other leaders in the region) learned the lessons from previous changes in the Central Asian area. He wanted to avoid any uncertainties that might arise after the passing of the leader in the absence of a designated successor. The recent events in Kazakhstan could also accelerate the transition process, leaving no doubts about the new Turkmen leader. However, attempts to find analogies with Kazakhstan may lead to misinterpretations. Turkmenistan’s situation differs from Kazakhstan at least in two fundamental respects. Firstly, unlike Kazakhstan, the power in Turkmenistan prefers a dynastic way to the selection of loyal successor outside the family; and secondly, the Turkmenistan elite is much more consolidated, with no power group capable of challenging the presidential "tokhum". This "family corporation" captured the most profitable parts of the Turkmen economy and eliminated all other economic groups, including those considering themselves untouchable. In addition, constant rumors about the health of Gurbanguly Berdimuhamedow may have contributed to the expected power transition.

Finally, the economic hardships of the last years in Turkmenistan may have also impacted the power transition. Turkmenistan’s leadership has become increasingly unpopular in the country itself with food shortages, border closures and different caprices that make the already problematic living conditions in the country more difficult. Substantial amounts of Turkmen people are ready to leave the country at the first possible moment. Although there is no expectation of rapid economic changes among the population in Turkmenistan, the transfer of leadership might be connected with hope that at least partial reforms in the country will take place. Either way, "the Family" should not be expected to share its political and economic power. Most of those who have tried to challenge it in recent years have disappeared.

IMPLICATIONS: The new presidential elections in March 2022 mean that the formal power transition will likely be accomplished in less than one month. The elections or decrees issued by state institutions in authoritarian countries mostly confirm the decisions adopted at the top of the informal power hierarchy. Nevertheless, the process of handover from one long-term leader to another is considered a highly vulnerable matter. In the Turkmen case, Gurbanguly Berdimuhamedow apparently did not risk any complications in the power transfer leaving a little uncertainty and proceeding with this precarious changeover phase smoothly.

Even if the election results are somewhat expected, the elections will not be the end point of the power transition in Turkmenistan. Gurbanguly Berdimuhamedow, the outgoing president, will probably keep "a control package" of power in the informal elite network. From the formal point of view, Berdimuhamedow senior will probably remain the head of Halk Maslahaty, the supreme political organ, and keep some political function to monitor the country's internal politics. As he was also promoted to the real head of the family after his 89-year old father passed away last year, he is expected to control the family’s business and resolve any disagreements within the family.

As for internal politics, significant changes in a strictly hierarchical system should not be anticipated. At the informal level, the system of a single leader will be, at least temporarily, replaced by a kind of father-son dualism. Serdar Berdimuhamedow will have to rely on the same mechanisms to keep power – political legitimacy based on elections and Halk Maslahaty decisions, executive power derived from the position of prime minister, and security provided by the security services. Informally, real power could oscillate between father and son and will undoubtedly undergo some changes as the new leader will be able to manage his power to maintain the family corporation.

The dualism of two Berdimuhamedows will also impact the personality cult, a traditional part of political culture in Turkmenistan. At least, temporarily, we are likely to observe the dual sacralization of the two presidents with the gradual elevation of Serdar, who has thus far not been an object of veneration. The Halk Maslahaty proclaimed the new era in its February 2022 session, which, in the past, indicated the introduction of the new ideological system.

Possible shifts in Turkmenistan's foreign policy are yet another issue for discussion. The geography of the recent visits of Serdar Berdimuhamedow principally focused on post-Soviet countries, in which he was introduced to other presidents. He also visited Japan during the 2021 Olympic games, traveled to China, Iran and the Glasgow climate summit. In this regard, however, we could expect the continuity of balanced foreign policy with economic cooperation and gas supplies to China and political and security cooperation with Russia and other Central Asian countries. Neither of these vectors can be entirely overlooked, although Serdar Berdimuhamedow may incline more towards Moscow due to his close connections (particularly in Tatarstan) and his educational background. He also maintains good relations with Central Asian younger generation leaders, for example Tajikistan’s designated next leader Rustom Emomali. In this context, the cautious opening of the relationship with Central Asian neighbors observed in recent years will likely to move on. However, as the regime prioritizes internal stability inside Turkmenistan, people-to-people relations will be excluded from any eventual foreign policy thaw.

CONCLUSIONS: The results of the March 2022 presidential elections will probably lead to the change of the president from the father to the son. Several factors caused the timing of this operation, which comes on the heels of continuous hereditary grooming, observation of other transitions in the broader region, and the introduction of the designated successor on the international scene. Recent events in Kazakhstan also speeded up the process. If the transition happens, Turkmenistan will become the second country in the post-Soviet space successfully undergoing a dynastical transfer of power (after 2003 in Azerbaijan). However, it does not mean that the process of transition from the second to the third Turkmen leader will come to its end.

AUTHOR'S BIO:. Slavomír Horák is an Associate Professor with The Department of Russian and East European Studies, The Institute of International Studies, Faculty of Social Sciences, Charles University in Prague.

More in this category: « Elite fighting and the unrest in Kazakhstan Did Cryptocurrency Miners Crash the Central Asian Power Grid? »
back to top