Nagorno-Karabakh: The Democratization of Precision Strike and the Viability of Military Power

The six-week Nagorno-Karabakh war, fought through the Autumn of 2020, may have been principally of local significance politically, but highlights changes in the viability of the use of force as an instrument of statecraft in a new era of great power competition. Extrapolation from the conflict should not be taken too far, but the democratization of precision strike and the constraints imposed on the use of air power pose serious questions for many European medium powers. 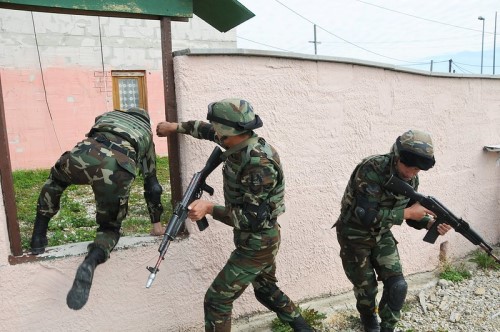 BACKGROUND: Nagorno-Karabakh, internationally recognized as Azerbaijani territory, has been occupied by Armenian separatists since the 1990s. Long described as a ‘frozen conflict’, there has been persistent if intermittent skirmishing between Armenian and Azerbaijani forces, which has usually favored the Armenians. This arguably led to a false lesson being drawn in Armenia that they remained militarily competitive, since in small-scale engagements – including one in July 2020 – Azerbaijan’s superior military equipment did not deliver a decisive advantage.

Following a summer of planning with assistance from Turkey, Azerbaijan launched a full- scale offensive to retake the occupied territories on September 27, 2020. In the opening days of the conflict, Azerbaijani forces successfully took several small villages overlooking critical ground lines of communication. As Armenian troops mobilized, the front stabilized and the Azerbaijanis began to take heavy losses, with Anti-Tank Guided Weapons inflicting significant attrition on their armor.

At the same time, however, the Azerbaijani side launched an extensive campaign of deep strikes using a combination of Turkish TB-2 UAVs to find targets, which were then attacked with Harpy and Harrop loitering munitions. They also fired a LORA Ballistic Missile at a key bridge connecting Armenia to Nagorno-Karabakh. These attacks inflicted a withering attrition on Armenian forces long before they approached the frontline. The attacks hit air defense systems and command posts, armored columns, artillery positions and infantry as they debussed at assembly areas far behind the front.

By the third week of the conflict, these deep strikes were taking a severe toll on the Armenian war effort. Ammunition was beginning to run low at the front, reinforcements were not reaching positions, and the Armenians struggled to mass units in their rear to conduct counterattacks against Azerbaijani breakthroughs. While in the mountainous and forested North the Azerbaijanis continued to make little headway, Azerbaijani forces began to make rapid advances in the South. By November, they had wrapped around the south of Nagorno-Karabakh and were pushing north to threaten the Lachin corridor – the primary ground line of communication between Armenia and the city of Stepanakert. On 8 November, Azerbaijani forces seized Shusha, a strategically placed town that opened up the routes to attack the regional capital.

Having suffered heavy casualties during assaults on complex terrain, with growing Russian unease, and the prospect of mounting international pressure in the wake of the U.S. election to limit harm to civilians who would invariably be shelled if an assault on Stepanakert took place, the Azerbaijani side accepted a negotiated ceasefire guaranteed by Russia and Turkey. Armenia – having lost over 190 main battle tanks and a proportionate number of supporting vehicles – recognized that it could not continue to fight and surrendered large parts of the territory, though Azerbaijan stopped short of a complete reclamation of Nagorno-Karabakh. Russian peacekeepers began to deploy from November 13.

IMPLICATIONS: There are many dangers in trying to extrapolate from this conflict to draw conclusions about the future of great power war. Both sides were mostly armed with older equipment, had limited numbers of professional troops, and had air forces that were too small to be utilized. Nevertheless, there are also some lessons that are worth highlighting.

The first is that the conflict demonstrates how it is possible for states to have a limited war within geographically defined limits without triggering runaway escalation. In the absence of a holistic ideological struggle as during the Cold War most of the points of friction between NATO and Russia, and between China and the U.S., are geographically limited. Russia is actively expanding its options for fighting limited conflicts and China has long theorized about local war under informatized conditions. In the wake of Russia’s annexation of Crimea, the war in Nagorno-Karabakh suggests that military action is viable, which risks changing actors’ risk calculus in other “frozen conflicts.” It is also notable that the attention of the international community was largely distracted and courses of action to shape the outcome were barely considered outside of Russia and Turkey.

The second lesson is that long-range precision strike has become democratized. This had already been evident in Yemen where the Houthis have similarly made use of ballistic missiles and loitering munitions, but in Nagorno-Karabakh Azerbaijan managed to employ these capabilities in an integrated manner to deliver a scale of effect that had operationally significant consequences. The precise techniques used by Azerbaijan would not have worked as decisively against a major power with modern air defense and electronic warfare systems. However, being able to deliver such a scale of effect at such a low cost highlights a vulnerability in many armies and demonstrates that range can now be achieved economically by smaller powers.

Appreciating the depth of vulnerability matters because while many great power armies have effective localized countermeasures for these threats, they do not train and are not equipped to employ these throughout their depth. NATO armies, for example, risk suffering disproportionately in their logistics echelons and face a paradox in that while armored forces remain critical for assaulting defended positions, they also have large signatures that risk being attrited long before they reach the direct fire zone. The conflict therefore highlights necessary reviews of tactical doctrine during the approach.

In many respects, the lesson that transfers most concretely to great power conflict is the extent to which modern UAVs and other sensors enabled antiquated capabilities – including second world war vintage artillery – to be employed with a high level of accuracy in tactical exchanges. Being able to utilize unguided and therefore cheap munitions for disproportionate effect because of pervasive surveillance over the front is an example of a force multiplier that maximizes the utility of legacy systems. For armies seeking to modernize, but who face constrained budgets, understanding which legacy systems can retain relevance through their interaction with new capabilities will be critical to remaining competitive.

Finally, the absence of either side employing their air forces was not because they did not have planes, but rather reflected the limitations of very small numbers of aircraft and their vulnerability to air defense systems leading both sides to conclude that the deliverable effects were not worth the cost. In the context of NATO, where many members can generate similarly small numbers of fast jets of a vintage that are highly vulnerable to modern air defense systems, it is worth asking whether many alliance members would similarly withdraw air contributions from an alliance effort. If they would then it begs the question whether the resources spent on very small numbers of aircraft might be better allocated elsewhere.

CONCLUSIONS: The issue of Nagorno-Karabakh – with Russian (and perhaps Turkish) troops between the two sides – has now frozen once again. It is not fully resolved but the war can be described as an incomplete Azerbaijani victory. After three decades of complex international interventions and counterinsurgency campaigns, the decisive outcome should put the world on notice that in a new era of great power competition, states resorting to the military instrument is once again an all too realistic option.

More in this category: « Political Crisis in Georgia Takes Turn for the Worst Genocide Against the Uyghyrs: The Reaction of the World »
back to top