On January 21, 2021 the Presidents of Azerbaijan and Turkmenistan signed an intergovernmental Memorandum of Understanding (MOU) for joint development of the newly named Dostluq (friendship in Azerbaijani and Turkmen languages) oil and natural gas field. This agreement will likely facilitate multiple new ventures in oil and gas in the Caspian Sea. It also reflects the mutual desire of the two states for increased cooperation in multiple spheres beyond energy and is the result of increased contacts between the two neighboring countries over the last two years.  Increased cooperation between Azerbaijan and Turkmenistan is likely to emerge beyond the sphere of energy. 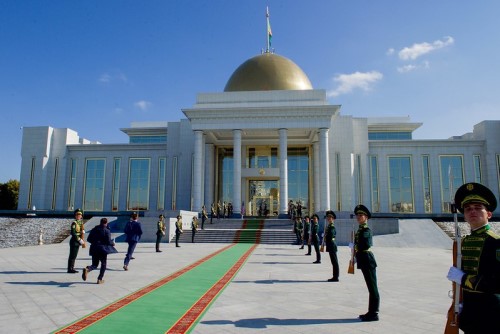 BACKGROUND: Turkmenistan and Azerbaijan are bordering states in the Caspian Sea, yet the trade and joint commerce between the two countries is quite limited. They have only minimal direct transportation links.  For close to three decades, Washington and the EU promoted unsuccessfully the establishment of a Trans-Caspian gas export pipeline linking Turkmenistan and Azerbaijan to bring part of Turkmenistan’s massive natural gas production to Europe. To date, Turkmenistan exports gas eastward to Central Asia and China and northward to Russia, and in the past exported to Iran. However, Turkmenistan has yet to establish export to higher paying markets to the West. Russia has at times blocked Turkmenistan’s moves toward exporting gas to Europe. The most famous incident was an April 2009 explosion damaging Turkmenistan’s gas export pipeline to Russia, following Ashgabat’s meeting with EU representatives to discuss potential exports, which many observers blamed on Moscow.

One obstacle to Turkmenistan’s ambitions to export to the West had been disagreement between Turkmenistan and Azerbaijan over how to delimit the oil and gas field straddling their maritime border in the Caspian Sea. The MOU marks an end to the delimitation dispute with a decision to jointly develop the field. This agreement was also facilitated by the conclusion of the Convention on the Legal Status of the Caspian Sea in 2018.

As an MOU, the agreement is not legally binding. In addition, the concrete details on the joint production still need to be hammered out between the sides. However, since the presidents themselves have openly celebrated the agreement, it is a firm commitment.

With the delimitation disagreement disposed of and with both sides signaling that the decision is part of a larger process to expand cooperation, additional collaboration in the energy sphere is highly likely. One strong option is the establishment of a short pipeline between Turkmenistan’s gas production in the Caspian and Azerbaijan’s existing major oil production Azeri-Chirag- Guneshli (ACG) field complex. This would enable initiation of Turkmen gas exports to the West through swaps.

The new agreement also increases the prospects of larger export of Turkmen gas westward via the Southern Gas Corridor. That project became fully operational on December 31, 2020 and it seems its completion motivated Ashgabat to take steps toward joining the project. While the Southern Gas Corridor was only under development, Turkmenistan took a quite logical decision to wait and see how the project will overcome multiple hurdles and be realized, and then decide to join.

The MOU comes on the heels of new cooperation between Azerbaijan and Turkmenistan in the field of oil marketing. In December 2020, Azerbaijan’s SOCAR Trading won a tender to trade some of Turkmenistan’s oil exports.

IMPLICATIONS: The agreement between Azerbaijan and Turkmenistan is a product of warming relations and increased contact between the sides that has taken place in the last two years. Cooperation between the sides is likely to expand into multiple new fields, beyond the sphere of energy. The likely next sphere will be expansion of transportation links, in light of the bare bones flight and maritime transportation links between the states. People-to-people ties are likely to increase. Despite being neighboring states, few citizens of the two countries visit each other’s countries and there is a dearth of institutional linkages between the two.

One likely implication of the newfound cooperation between Azerbaijan and Turkmenistan is to pull the rug out from under an initiative Georgia has actively promoted for the past four years, aimed at exporting Turkmenistan gas to Europe gas via Iran, Armenia, and Georgia. While its prospects were never great, it is much more likely that if Ashgabat seeks to export gas westward, it will do via the existing Southern Gas Corridor.

The agreement is likely to trigger renewed Western commercial interest in Turkmenistan’s energy sector. Oil and gas companies rarely invest in disputed territories. The end of the delimitation dispute will allow companies to take a fresh look at Turkmenistan. Also, Azerbaijan has a reputation in the oil and gas industry as a country that upholds sanctity of contracts with foreign investors and protects foreign investments in the country. Partnership with Azerbaijan may help Turkmenistan attract Western investment to their joint projects.

In recent years, Azerbaijan’s SOCAR has taken interest in investing in and developing energy resources in Central Asia. The agreement with Turkmenistan is likely to give impetus to further exploration and investment activity in Central Asia.

The newfound cooperation between Azerbaijan and Turkmenistan also shows that while the two states are formally part of two regions and often administered under different bureaus in the US and European foreign policy mechanisms, Central Asia and the South Caucasus are two parts of one region—the Caspian region, which is integrating more and more.

It is important to watch other littoral states reaction to the emerging cooperation between Azerbaijan and Turkmenistan. Currently, the two states are taking baby steps in their cooperation. If they try to establish major gas export westward, the reactions remain to be seen.

Dr. Brenda Shaffer is a Research Faculty member of the US Naval Postgraduate School, a Senior Fellow at the Atlantic Council’s Global Energy Center and a Senior Advisor for Energy at the Foundation for Defense of Democracies (FDD) think tank. She is the author of Energy Politics (University of Pennsylvania Press), which is a used as a textbook in over 200 university courses.

More in this category: « Central Asia's Integration Takes One Step Forward, One Step Back Russian and American Strategies for Central Asia Ignore Link to Caucasus, Fall Short »
back to top