Official reassurances that Xinjiang's internment camps are only "temporary" fly in the face of mounting evidence to the contrary. Faced with incontrovertible data that now up to 1.5 million Uyghurs and Kazakhs are extra-judicially interned, Beijing is refusing to bow to international criticism and continues to justify its counter-terrorism strategy. Calling on the world to support its methods, Beijing is mounting an all-out public relations drive to persuade critical voices that in fact the camps are benign and successful in achieving their objectives. But the "experiment" already two years in operation shows no sign of abating. World leaders are calling it a cultural genocide and stepping up their demands to inspect the facilities. 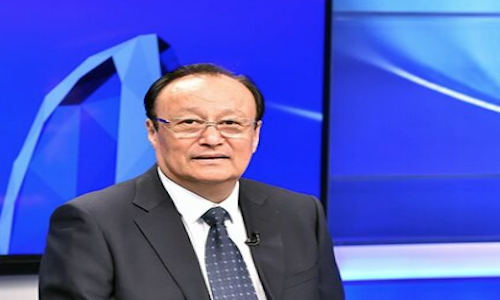 BACKGROUND: China made more attempts to fend off international condemnation last week at the National People’s Congress in Beijing by promising that the internment camps for Muslims were only temporary. Shohrat Zakir, Chairman of the Xinjiang Autonomous Region, addressing a side meeting, said that the number of trainees at the "vocational training centers" was "a dynamic number." He added that "as a whole, the number of people in the education centers should be less and less, and if one day society no longer needs it, these education centers can gradually disappear." He equated them with boarding schools.

This further attempt by Beijing to massage the fact of hundreds of thousands of people extra-judicially and so far permanently interned by the regime, appears to be an attempt at face-saving spin. Either Beijing does not understand how their statements concerning these camps are perceived by the world, or it does not care. Attempts over the past two years to cover up the reality surrounding the so-called "reform through education" "vocational training schools", ring increasingly hollow.

Addressing the meeting, Zakir in a further attempt to bring the world on his side, produced the terrorism card. “Fighting separatism and extremism is a long-term battle. We can’t relax for a moment,” he said, adding: “It does not target a certain ethnic group or religion, but targets violence and crime, separatism and extremism.”

That statement makes Zakir’s own remarks about "temporary" camps more ominous than reassuring. Claiming the camps will disappear “if” they are no longer needed lends the lie to reassurances that one day they will be no more. The fact that none of the inmates has been tried in open court, that most are ordinary citizens rounded up to fill quotas, that thousands are in fact educated, professional, fluent Mandarin-speaking Communist Party members or officials, or highly accomplished academics with national and international reputations flies in the face of the government-stated aim of wanting to eradicate terrorism. That this same government expects the world to accept that one day it will unilaterally decide that its so-called aim has been achieved, stretches credulity. It stretches the imagination that it will one day open the camp doors and allow one and a half million Uyghurs and Kazakhs back onto the streets, assuming that somehow they will have become the acquiescent citizens their training regime was meant to have created. So far though, even this far-fetched plan seems a distant possibility. There is mounting evidence of more inmates streaming into the camps with no sign of letting up.

China’s reputation suffered another blow a few days later. A week after the Beijing Congress, there was standing room only at a side event at the 40th session of the United Nations Human Rights Council (UNHRC) in Geneva. The “Protecting Fundamental Freedoms in Xinjiang” seminar on March 13th, organized by the United States and co-hosted by Canada, Germany, the Netherlands and the UK heard survivor testimony, government officials and expert panelists discussing the ongoing human rights abuses in the province. Despite threats by Chinese government officials that participation in the event would constitute a “hostile act,” more than a dozen nations were represented as the panel addressed a packed floor.

Adrian Zenz, a researcher at the European School of Culture and Theology in Korntal, Germany, the primary whistle blower on the existence, extent and growth of the camps presented a revised estimate of 1.5 million detainees, up from his original calculation of one million. Based on satellite imagery, public spending on facilities and accounts of released inmates and missing family members, he said that although still speculative, he was confident in his estimation that just under 1 in 6 of the Uyghur and Kazakh population’s adult members have been incarcerated. In his concluding remarks he noted that "the Chinese State's present attempt to eradicate independent and free expressions of the distinct ethnic and religious identities in Xinjiang is nothing less than a systematic campaign of cultural genocide and should be treated as such."

IMPLICATIONS:  Since Geneva, China’s spin doctors have been busy with damage control. From the moment Beijing admitted the existence of camps two years ago, albeit initially to a home audience, the camp profile has changed from basketball pitch-sized courtyards filled with cowed men of all ages wearing blue uniforms, to more recently bright classrooms of young people singing English children’s songs for western journalists. The detention centers are being re-styled yet again as "voluntary campuses" according to Executive Vice Foreign Minister Le Yucheng, speaking at the U.N. Human Rights Council in Geneva, who steadfastly maintained the detention centers are designed to provide training and fight regional terrorism, and are "actually boarding schools or campuses, not camps," he said.

Since the conference Beijing has issued several press releases justifying the internments. Chinese Government statistics released this week claim 13,000 terrorists have been arrested in Xinjiang since 2014.  Beijing continues to re-iterate the camps are benign, simply giving free classes on the country's common language, offering knowledge of the law and providing vocational skills for the trainees who have been influenced by terrorism and extremism and are suspected of minor criminal offenses.

A major side benefit of the internment policy, claims the government, is that Xinjiang can plan for 300 million tourists to visit the region by 2020.  According to the CCP mouthpiece the Global Times, "the Xinjiang regional government's efforts to eliminate extremism and ensure social stability, including the establishment of vocational training and education centers, have contributed to the booming tourism," quoting a government official speaking in January.

Human interest stories of Uyghur lives transformed by re-education, businesses created for women, and villagers’ lives turned around from abject poverty to prosperity in a few short years, have been filling the China Daily and Global Times. Tales of lives pulled back from the brink of extremism are publicized to western journalists and diplomats visiting carefully selected institutions.

All this has culminated in a new Chinese Government White Paper released March 18, which re-iterates the necessity of intensifying the fight against terrorism and extremism and the protection of human rights in Xinjiang. Following the criticisms from the world in Geneva, Beijing is now retaliating by calling on the international community for support. "China's fight against terrorism and extremism is an important part of the same battle being waged by the international community," the white paper said, adding that "it is in keeping with the purposes and principles of the United Nations to combat terrorism and safeguard basic human rights. In today's world, faced with the severe challenges of terrorism and extremism, no country can shy away from them," it said.

To win over hearts and minds, the Global Times issued three press releases in quick succession on March 18, following the announcement of the White Paper, each one more urgent and persuasive in its tenor. In its third article to explain so-called re-education camps the Global Times asks for world understanding: "Terrorism and extremism jeopardize human rights and sustainable development as they propagate intolerance between different religions, cultures and societies, challenge human justice and dignity, and do great harm to peace and security," it says quoting the White Paper. The idea of the camps, claim Beijing, has been a response to the UN Global Counterterrorism Strategy (60/288) to wipe out the conditions conducive to the spread of terrorism and to prevent and combat terrorism. The camps, it claims, are to offer educational and training "aid" to the trainees.

"Thanks to these preventive measures," claimed the Global Times, "Xinjiang has witnessed a marked change in the social environment in recent years and people have a much stronger sense of fulfillment, happiness and security," echoing remarks made by Xinjiang's deputy foreign publicity director, Ailiti Saliyev in 2017, that "the happiest Muslims in the world live in Xinjiang."

CONCLUSIONS: Much of the world appears at odds with this assessment, based on evidence to the contrary. U.S. secretary of State Mike Pompeo, speaking in Washington last September, said that "China was in a league of its own when it comes to human rights violations," while Michael Kozak, the head of the U.S. State department's human rights and democracy bureau, added his own condemnation of China's behavior. "Rounding up in some estimations...millions of people, putting them into camps, and torturing them, abusing them, and trying to basically erase their culture and their religion... It's just remarkably awful," adding " it's one of the most serious human rights violations in the world today."

Following the findings of last week's Geneva panel, governments of Britain, Germany and Canada joined calls to allow an independent UN fact finding mission to Xinjiang, and the United Nations High Commissioner for Human Rights Michelle Bachelet indicated that her office has been seeking access since December 2018 to carry out its own independent assessment of the detentions. If Beijing really does have a plan, and it is a "temporary" one; if these so-called vocational training schools are simply boarding schools, then it will likely have no objection to such a visit.

Ruth Ingram is a freelance writer.

More in this category: « Kazakhstan's President Resigns at a Moment of Political Tension and Uncertainty "Modeling" Peace on the Great Silk Road »
back to top