In May, Beijing hosted a summit of global leaders on its One Belt and One Road (OBOR) initiative, a most ambitious project aimed to recreate the ancient Silk Road, connecting China’s industrial heartland to Europe via Central Asia and the Middle East. Given the gigantic scale of the scheme, the geostrategic and economic impact on Central Asian trade and development will be significant. Yet it is unlikely to benefit everyone equally. The less developed and poorer countries along the proposed routes, including those in Central Asia, will face serious challenges if they assume that this initiative alone can fix their economic problems, and use it as an excuse to further delay needed market reforms while coping with the effects of the massive Chinese initiative. 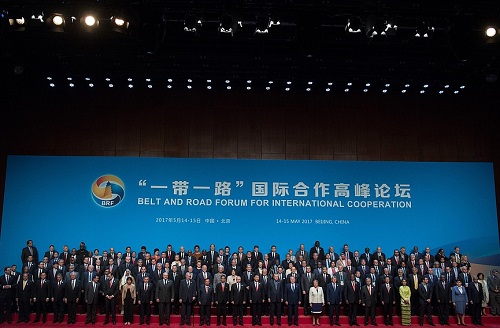 BACKGROUND: In 2013, Beijing launched the OBOR initiative to address gaps in the infrastructure connecting China, Central Asian countries, the Middle East, and Europe. The plan envisioned a single multifunctional transportation link for secure movement of goods and resources through land-based and maritime transportation and communication networks. The land-based network – the Silk Road Economic Belt – runs via Central Asia, Iran, Turkey and Eastern Europe, while the maritime network – the Maritime Silk Road – runs through Southeast Asia, South Asia, Africa and the Mediterranean. Beijing has not published a list of all proposed OBOR projects. The scheme at a work-in progress stage leaves room for maneuver – with proposals or projects to be added or removed. Previously developed Chinese projects will become components of the networks. China is expected to invest up to US$ 1.3 trillion putting it in a position to control financial flows. The China Development Bank and the Export-Import Bank of China together with the newly established Asian Infrastructure Investment Bank (AIIB) will shoulder the financial burden.

China has already substantially advanced its economic interests in the strategically important and resource-rich Central Asia region. Since the 1990s China has worked persistently in Central Asia to build energy infrastructure links as a key part of its Eurasian security architecture to ensure Chinese economic and political domination. China is already a major investor and creditor, as well as an important trade partner for all countries in Central Asia. It has financed and built a number of important infrastructure links such as the Trans-Asia Gas Pipeline (TAGP) along a route through three Central Asian countries to China, and a pipeline to deliver Kazakh oil to the Chinese border. Since 2010 China has been a key importer of Turkmen gas. China’s trade volume with Central Asia totals US$ 50 billion, and has outpaced Russia since 2013. It has also invested in a number of projects to help countries improve their transportation infrastructures. According to reports, the AIIB recently approved loans worth US$ 1.73 billion to implement 13 projects in eight countries, including Tajikistan, Uzbekistan and Kyrgyzstan. Tajikistan will benefit from a project to improve roads, and connectors with neighboring Uzbekistan.

The OBOR initiative has been presented as a great deal, free from geopolitical, ideological or military objectives that will promote free trade and bring tremendous economic opportunities to all countries along the routes. Yet not everyone agrees with this common Chinese narrative. In January the Fitch credit rating agency published a report on OBOR questioning the real intentions behind it. The agency stated that the proposal is “driven primarily by China's efforts to extend its global influence,” and that “genuine infrastructure needs and commercial logic might be secondary to political motivations.”

IMPLICATIONS: It is important to stress that OBOR’s primary goal is not industrial development. It is a China-centric trade infrastructure development initiative based on a pragmatic concept – enhancing and expanding international trade channels predominantly for current and upcoming Chinese surplus outputs. Beijing wants to redirect its surplus savings by investing in OBOR projects and secure existing and new markets for Chinese products while keeping Chinese companies busy implementing the initiative’s projects.

Clearly, the initiative will help address some infrastructure deficiencies in Central Asia, particularly in poor countries such as Tajikistan and Kyrgyzstan where a shortage of domestic savings is a key roadblock for any investments, including for infrastructure.

However, by investing in new infrastructure projects or improving connectivity among already existing routes in Central Asia, China will become a key stakeholder in the whole region. New projects will allow China to better facilitate its exports to existing and new markets in Europe as well as in Central Asia. By securing easy access, faster delivery and substantial reduction of transportation costs, China will further improve the economics of its already highly competitive products. Already existing local production in Central Asia will most likely be depressed by a massive flow of cheap Chinese goods, and new development projects will become economically unsustainable or never be initiated.

Indeed, while OBOR theoretically could open new markets for Central Asian outputs, it will be of little help because the Central Asian countries do not have many products and goods, except oil and gas or mineral resources, to offer either to China or international markets.

Central Asian countries face an urgent need to diversify away from oil and gas to other commodities, while countries such as Tajikistan and Kyrgyzstan need to reduce reliance on remittances. Such reforms require Western investments and innovation technologies to develop manufacturing industries and create jobs to go beyond just the development of trade infrastructures. Serious obstacles to attract such investments are the lack so far of real structural and market reforms, an unfriendly business environment, corruption and deficient or even absent rule of law. Unfortunately, the OBOR initiative may leave Central Asian countries with the impression that Chinese capital will help them overcome their existing economic problems. Chinese capital, less sensitive to the business environment, can become more easily accessible for Central Asian states. Yet the economic and political concessions that could be requested by Chinese capital providers could be very onerous or even devastating. These states could find themselves losing control over national resources and assets.

The Fitch credit agency doubts that China’s banks can effectively identify profitable projects as well as manage financial or project execution risks, arguing that Chinese banks do not have a proven “record of allocating resources efficiently even at home, especially in relation to infrastructure projects.” The agency also warns borrowing countries that OBOR’s loans may “have negative impact on the country’s public finance position if debt-servicing from project proceeds becomes a problem.” Countries may be stuck with ineffective or nonperforming Chinese loans and face much more serious challenges when borrowing from international banks. While China may write off bad loans and continue investing if projects make political sense, this could also cost borrowing countries additional serious concessions. Therefore, the ability of Central Asian countries, especially the smaller and poorer ones, to protect their national interests will be limited at the very least.

CONCLUSIONS: The OBOR initiative has been grounded on a detailed calculation of Chinese national economic and political interests. Central Asian stakeholders’ interests might not always be in line with China’s. China is the key driver of the initiative, and the play has already begun according to its rules. Central Asian expectations of benefits from OBOR could be much greater than the scheme might bring. Clearly, the OBOR projects can be beneficial, but they should not be seen as some kind of remedy for the region’s problems. Complacency in the face of the initiative’s hazards might trigger even more troubling negative developments. It remains to be seen whether Central Asian countries will be able to boost their economies to establish international business norms and culture, and become a part of the international trading system. Otherwise, they risk becoming predominantly poor transit states with depressed economies.

More in this category: « Why the Sharp Downturn in Russian-Azerbaijani Relations? Ingush Police to support Chechen Units in Syria »
back to top