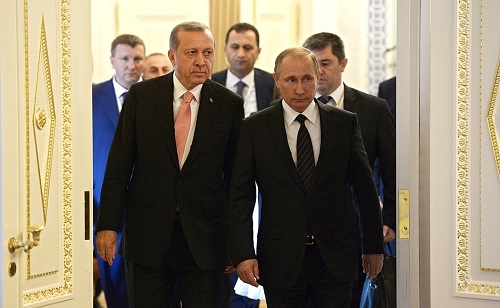 BACKGROUND: : The dynamics of the last 10 years demonstrate that the Russian Federation has regained significant power and influence in the former Soviet space. By fully controlling Crimea, Russia now has almost complete strategic dominance over the Black Sea. Russia also has a strong military presence in Armenia and in the breakaway regions of Georgia, allowing it to establish control over the major elements of infrastructure and communication lines on relatively short notice. Russia has also made significant progress in expanding the Eurasian Economic Union (EEU), which in addition to the original members – the Russian Federation, Belarus and Kazakhstan – now also includes Armenia and Kyrgyzstan. By displaying a willingness to use military force in Georgia and Ukraine, Russia has sent a warning notice to other neighbors as well, and that notice has been well taken.
Having established these realities on the ground, Russia has a much stronger negotiation position vis-à-vis the West on a potential new global or European security architecture. President Putin, unhappy with the world order of the post-Cold War era, has been pushing for negotiations for almost a decade now, and the probability is high that he will achieve them with the new U.S. administration. By using political, economic/energy and propaganda tools, Russia has already prepared the ground for such negotiations in major European capitals.

Unlike Russia, Turkey is on its way to completely evaporating its major strategic and economic gains of the 90s and early 2000s. By targeting and weakening the foundations of secularism, President Erdogan and his followers have opened the Pandora's Box of both intended and unintended consequences that they can no longer manage. Both Western and Turkish strategic miscalculations in relation to developments in Middle East have fueled mutual mistrust and miscommunication. As a result, Turkey is now facing destabilization of unprecedented magnitude in its recent history. Turkey's current weakness and the West's inability to support it is pushing Turkey to look for compromises with Russia. Negotiating with Russia from a position of weakness will have serious costs for Turkey, but also for key Turkish and Western allies in the Black Sea-Caspian region – Georgia and Azerbaijan, as well as Romania and Bulgaria.

The U.S. is also retreating from a pro-active presence in Central Asia. In fact, the Caspian energy and military-security interests in Central Asia have moved from the list of top U.S. foreign policy priorities to the periphery of U.S. interests. In addition, the range of U.S. strategic decisions – large ones like the invasion of Iraq or support of the Arab Spring, and relatively smaller ones like the recognition of Kosovo's independence and the management of Turkish-Armenian rapprochement – all left negative footprints on the region. But the mishandling of ISIS and the Syrian crisis are the two most negative legacies of the U.S. in the last decade, both of which empowered Russia and contributed to weakening Turkey.

IMPLICATIONS: Turkey was a key ally, a major anchor and a channel of the West's political, strategic and economic interests in the South Caucasus and Central Asia since the collapse of the Soviet Union. Turkey was a major driver for the development of energy transit infrastructure, and for many years served as one of the key trading partners and sources of investments for almost all countries of the region. For Georgia and Azerbaijan in particular, Turkey is an indispensable strategic partner that allowed the two countries link up with and integrate into the global economy. For two decades, Turkey served as a major balancing factor against Russian influence in the South Caucasus. But as of early 2017, Turkey's ability to perform the role of a pro-active strategic actor in the Black Sea-Caspian region has significantly narrowed, leaving the space open for an enlarged presence and increased political influence of Russia in the region.

This new strategic reality not only affects more independent-minded Azerbaijan or pro-Western Georgia, but also Armenia, a member of the EEU and Collective Security Treaty Organization (CSTO), two Russian-led economic and security organizations. Unbalanced and unchallenged in the South Caucasus, Russia leaves no alternatives for Armenia but to move towards even closer integration with Russia at the expense of Armenia's sovereignty.

Azerbaijan and Georgia cannot afford to be passive observers of the developments in Turkey. First of all, the two countries should offer whatever help they can provide for the Turkish government's anti-terrorism efforts, or in any other area where the Turkish government may use their support. Azerbaijan and Georgia should also use their diplomatic power to emphasize the importance of stability in Turkey for countries of the South Caucasus and Central Asia. The assumption that this is obvious to Western European or American officials is false and should be dismissed.

And finally, Azerbaijan, Georgia and their Central Asian allies should boost their efforts to make the Asia-Caucasus-Europe (ACE) Trade Corridor truly functional and engage with as many actors as possible. In the changing strategic environment, countries of the region and their governing elites need to realize that a sustained presence and interest from a wide range of international actors, as well as the commercial interests of producers, global traders and consumers from Europe, Asia and the U.S. will facilitate greater interest in stability and security in Central Asia and the South Caucasus.

CONCLUSIONS: In times of low oil prices and other political and economic challenges, regional countries cannot afford to waste time and resources. It is now the high responsibility of leaders to clean their respective houses from all barriers, including corruption, and create the best possible conditions for transit of Asian cargos via Central Asia, the Caspian Sea, the South Caucasus corridor and the Black Sea to Bulgaria and Romania. This is the only way that countries of the South Caucasus can bring new balancing powers to the region, which is vital for the survival of their sovereignty. If regional countries will succeed in this effort, it may provide a helpful demonstration of the region's value to Western partners and to attract renewed U.S. and Western commitment to the region, including from the new U.S. administration.

AUTHOR'S BIO:  Mamuka Tsereteli is a Senior Fellow at the Central Asia-Caucasus Institute.

More in this category: « The Kremlin’s Last Resort: Kadyrovtsi in Russia’s National Guard Israeli PM’s visit to the two sides of the Caspian Sea »
back to top