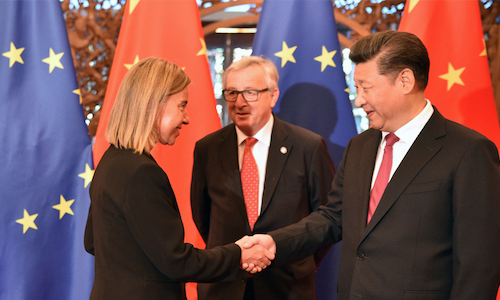 BACKGROUND: The Georgian economy has drawn investors’ interest owing to its unique position to facilitate the export of goods from China to the European Union in terms of both geography and trade treaties. The country’s location on the Black Sea is well-positioned for projects as part of China’s Belt and Road Initiative (BRI, previously OBOR) to encourage Chinese firms to go abroad and export goods by sea and by rail. BRI is backed by a USD 50 billion Silk Road Fund for investment in infrastructure, with additional funding available from the Asian Infrastructure Investment Bank (AIIB), which has over USD 100 billion in authorized capital and in which Georgia is a founding member. The Silk Road Economic Belt (SREB), the overland part of the BRI initiative, aims to facilitate the transport of cargo from China’s westernmost Xinjiang region via Central Asia to Europe.

Multiple nations are vying to become end nodes for the Silk Road transportation corridor in order to attract both Chinese and Western FDI. Georgia is well-positioned against the competition with proven ability to receive cargo trains from Xinjiang, China to Tbilisi in just 9 days. Compared to cheaper, but significantly slower freight by sea which takes an average of 30 days from Chinese to European ports, rail freight to Georgia and the Black Sea is the more expeditious option.

The EU-Georgia Deep and Comprehensive Free Trade Area (DCFTA) was finalized in 2013. It introduced a preferential trade regime thus integrating Georgia into the European single market and removing import tariffs. In addition, Georgia entered an agreement with the European Free Trade Association (EFTA) in June 2016, adding access to Switzerland, Norway, Iceland and Lichtenstein. The DCFTA and EFTA in combination with Georgia’s existing bilateral free trade agreements with Turkey and members of the Commonwealth of Independent States (CIS) give it access to markets that serve over 800 million people.

Beijing is increasingly eager to diversify its export channels and avoid risks in view of both geo-economic and geopolitical dynamics. It faces increasingly protectionist trade policies around the world and pushback against its own mercantilist ambitions. It also faces uncertainty in the South China Sea, where any escalation of tensions has the potential to disrupt seaborne international shipping and trade. In view of these trends, the opening up of new emerging markets in the Eurasian heartland –– the Belt and Road Initiative countries –– is a long-term stratagem to mitigate risk.

It follows that Georgia’s unique position as the only country in the South Caucasus and Central Asia with unrivalled access to both European and Eurasian markets has made it the logical partner for a free trade agreement with China. This is good news for bilateral trade: a 2015 joint feasibility study found that a China-Georgia FTA would increase Georgia’s annual exports to China by 9% and China’s exports to Georgia by 1.7%.

In February 2016, China and Georgia officially launched the first round of negotiations for a free trade agreement (FTA). Both countries pledged to conclude the deal within 2016. In an accompanying statement, Genadi Arveladze, Georgia’s chief negotiator, emphasized that China has become both the country’s fourth largest trading partner and one of its fastest growing export destinations. Substantive negotiations were finalized in October 2016 after three rounds of talks.

IMPLICATIONS: Georgia has seen a surge in both investment from and trade with China in the past five years. Chinese FDI in Georgia reached USD 218 million in 2014, while Georgia’s exports to China more than quadrupled in 2014-2016 — doubling in value in Q1’15 through Q1’16 to USD 49.6 million. What’s more, and despite growing FDI in Georgia’s infrastructure and the agricultural sector, its trade balance vis-à-vis China has begun to improve — year-on-year imports from China declined by 29.3% to USD 119 million.

Georgia must finalize four major infrastructure projects to develop into a transshipment hub for EU-China trade. These were outlined by PM Giorgi Kvirikashvili in his opening speech at the 2016 CAMCA Regional Forum, held on June 17-19 in Tbilisi. They are the Anaklia Port project; two rail tunnels in eastern and western Georgia; the Baku-Tbilisi-Kars railway; and the East-West highway.

The Anaklia Deep Sea Port project in western Georgia, worth USD 2.5 billion, should see the start of construction of a high-capacity cargo port on the Black Sea coast by fall 2017. It will receive cargo by rail from Xinjiang, China via Kazakhstan’s Aktau & Kuryk ports, over the Caspian Sea to Azerbaijan’s Baku & Alyat ports, and by rail to Georgia. When at capacity, it should handle 100 million tons of cargo per year. The U.S.-Georgian consortium behind the construction is also planning for a Free Industrial Zone (FIZ) adjacent to the port, which should add value with local light manufacturing. The European Commission has calculated that the Anaklia project could save up to EUR 10 billion in shipping costs for the EU’s economy by 2030. In addition to facilitating the export of goods from East Asia to Europe, the port should also enable the export of European goods directly to the landlocked states in the Caucasus and Central Asia — with a total of 163 million consumers — on a hitherto unprecedented scale.

The soon to be completed Baku-Tbilisi-Kars railway will connect Azerbaijan and Georgia to Turkey, making Georgia a doubly vital link in the new Silk Road. It will effectively make it possible to ship cargo by rail from China to Europe — without passing through Russia, an increasingly unreliable trade partner — for the first time.

The East-West highway is a major artery for road traffic connecting Azerbaijan and Armenia to Georgia's Black Sea ports and Turkey. It is also part of the Transport Corridor Europe-Caucasus-Asia (TRACECA) program which aims to link the European Union with Central Asia and the Caucasus. The highway has been constructed and upgraded since 2006 with funding from the World Bank and the Asian Development Bank, and will provide additional flexibility to overland trade.

In all, Georgia’s favorable geographic location, its unrivalled access to European, Central Asian and East Asian markets and its inclusion in both the EU’s and China’s infrastructural projects will transform it into an important link for China-EU trade. Correspondingly, its — and its neighbor states’ — bargaining power vis-à-vis Russia should increase.

NATO has stopped short of expanding its security guarantees to Georgia in fear of provoking Moscow in the wake of Russia’s invasion of eastern Ukraine and the illegal annexation of Crimea. Moreover, the incoming Trump administration in the United States is expected to seek to return to a ‘spheres of influence’ order as opposed to the rules-based international order. NATO will not extend its reach to the South Caucasus in the foreseeable future. Therefore, the countries in the region must seek to seize every available opportunity to integrate into global links and value chains to break their geopolitical isolation.

In the past, Georgia has reeled from Russian sabotage of its energy infrastructure, its trade and its political course towards Euro-Atlantic integration. It was also forced to watch the creation of frozen conflicts in its occupied Abkhazia and South Ossetia regions. Nevertheless, as Georgia becomes more vital to the EU’s and China’s joint economic interests, it will conceivably grow to be less prone to Russian aggression because the two are global players that are also irreplaceable trade partners for Moscow. To that end, Russia’s Foreign Ministry was quick to issue threats over the EU-Georgia DCFTA in 2013, but made no such comments over the signing of the China-Georgia FTA in 2016. Signs already point to tacit Russian acceptance of Chinese military and economic efforts in Central Asia; it is not inconceivable that the same dynamics may come into play in the South Caucasus, where Moscow’s staying power has been even weaker.

Azerbaijan, against which Russia leverages the Nagorno-Karabakh conflict and could potentially leverage the Lezgin and Talysh minorities in the country, should also find its security situation improved as the South Caucasus becomes a conduit for EU-China trade. Additionally, Russia’s own enduring inability to develop the economy of the North Caucasus will make it hard-pressed to accept more daring foreign policy maneuvering by both Tbilisi and Baku, especially as Moscow seeks to attract investment from the latter.

Kazakhstan, whose foreign policy options remain constrained by Putin’s Eurasian Economic Union (EEU) project and fears that the ethnic Russian minority in the country’s north might be instrumentalized against it as it has been in Ukraine, should also find much-needed breathing room. Finally, the importance of the Caspian Sea for the shipment of goods through Central Asia will predictably entail stronger Chinese, EU, and U.S. pushback against the sea’s militarization by Russia and Iran.

CONCLUSIONS: Chinese and European Union investment in Georgia will help realize the New Silk Road and interconnect the Eurasian continent with overland trade and transportation infrastructure on a scale never before seen. In the mid- to long-term, this should provide countries spanning from the South Caucasus to Central Asia with tangible economic benefits and revitalize the once vibrant economies on the path of the historical Silk Road again. Most significantly, the influx of international trade stakeholders from far and wide to the region should afford the states in the South Caucasus and Central Asia a historic opportunity to craft truly independent foreign policies for the first time in a century. In view of these spillover effects for the entire region, Georgia’s neighbors in the post-Soviet space should continue to vehemently support the country’s sovereignty and territorial integrity.

AUTHOR’S BIO: Boris Ajeganov is a Junior Research Fellow with the Central Asia-Caucasus Institute – Silk Road Studies Program Joint Center, based in Stockholm and London. He is also Assistant Editor of the CACI Analyst. He can be reached at  This email address is being protected from spambots. You need JavaScript enabled to view it. and on Twitter, @ajeganov.

More in this category: « Israeli PM’s visit to the two sides of the Caspian Sea Abu Zar and Al Qaeda’s presence in Central Asia »
back to top