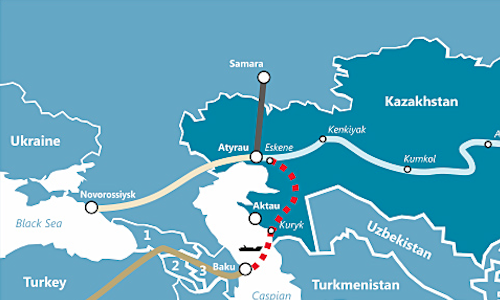 BACKGROUND: Azerbaijan and Kazakhstan have been planning the Trans-Caspian Oil Transport System (TCOTS) for a decade. The project calls for construction of a 739-kilometer overland pipeline from Eskene to Kuryk in Kazakhstan, to be called the Kazakhstan-Caspian Transportation System (KCTS), and a 700-kilometer Trans-Caspian Oil Pipeline (TCOP) running from Kuryk, near Aqtau port, underneath the sea to Baku. As Kashagan has now just begun commercial production, after years of delay, the two countries have signed an agreement confirming the earlier understanding and reaffirming the intention to build the undersea TCOP together.

Previously, Russia has resisted implementation of the planned doubling of the volume of the Caspian Pipeline Consortium (CPC) pipeline, which conducts Tengiz oil to the Black Sea, and ultimately to the world market through the Turkish Straits. However, earlier this decade, after a restructuring of the consortium, that work began in stages. The CPC is this year reaching its fully increased capacity of 1.4 million barrels per day (bpd). Original work on the TCOP provided for Kazakhstan to ship 150,000 bpd across the Caspian in the first stage, but that volume is already mostly accounted for by the 120,000 bpd that Kazakhstan sends to Azerbaijan across the Caspian Sea by tanker.

The plan was for the oil from Kazakhstan to arrive in Azerbaijan for further transit to Georgia’s Black Sea coast, from where tankers would take it the Ukrainian port of Odessa. There, it would enter the planned Euro-Asian Oil Transportation Corridor (EAOTC) via the Odessa-Brody Pipeline (OBP). The EAOTC project was agreed in May 2008 among Azerbaijan, Georgia, Lithuania, Poland, and Ukraine. Soon thereafter the bilateral Azerbaijani-Polish economic cooperation commission recommended to the EU that EAOTC be included in the framework of the Eastern Partnership policy, which sought to coordinate the EU’s development assistance to Armenia, Azerbaijan, Belarus, Georgia, Moldova, and Ukraine.

IMPLICATIONS: The EAOTC project has not been implemented because of the delays until now in developing the Kashagan source, and because Russia eventually agreed to the CPC expansion, obviating the need to find other export routes for Tengiz oil. In late 2010, the Azerbaijani-Polish commission agreed to work with Kazakhstan’s “national champion” KazMunaiGaz and Azerbaijan’s SOCAR, in order to coordinate the timing of EAOTC development work with that of the TCOP. This fall, the European Commission included the extension of the OBP to Adamowo, Poland, on its revised schedule of “Projects of Special Interest” (a list for energy infrastructure development) that it seeks to encourage via financial and political support. The Brody-Adamowo link is the first leg of the EAOTC.

On the other shore of the Caspian, developments are already under way, thanks partly to long-term assistance from the EU’s international program Transport Corridor Europe-Caucasus-Asia (TRACECA), which Kazakhstan sees as necessary for circumventing uneconomic Russian strangleholds. In October 2009, French president Nicolas Sarkozy visited Kazakhstan and signed an agreement with his counterpart Nursultan Nazarbaev giving a French consortium exclusive rights for one year to negotiate terms for constructing the KCTS. (The US$ 3 billion contract would have created several thousand French jobs). The negotiations failed because the oil was not ready. French companies have nevertheless been invited to participate in the new plans currently being redeveloped.

The new port at Kuryk is already under construction, and officials in Kazakhstan are modeling it after Azerbaijan’s multimodal and customs-streamlined Alat port. Its ferry complex will permit transport without unloading cars and Kazakhstan regards it as strategically important: it will handle oil, polyethylene, iron ore, and concentrates destined for the world market through Baku. With Aktau port (now operating almost beyond capacity), it will transit 18 million tons of goods annually, a figure that Astana intends to increase to 33 million tons by 2030 and 50 million tons by 2050. French companies are also involved again in the preliminary design of the Eskene-Kuryk KCTS.

In theory, the existing tanker oil transport system from Kazakhstan to Azerbaijan could be expanded with more tankers. However, there are no shipyards in the region capable of satisfying demand for them, and the Caspian Sea’s land-locked status makes it too expensive to construct them elsewhere, even in modular parts, for assemblage in the region. The cost of building entirely new shipyards and port terminals for tanker fabrication in the region itself is equally prohibitive. By contrast, the undersea pipeline would likely be profitable at 500,000 bpd (nominal projected volume of Kashagan Two) and would definitely be so at 1.2 million bpd (nominally projected for Kashagan Three).

Towards the end of the last decade, Astana and Baku discussed the possibility of an undersea natural gas pipeline to take Kashagan’s associated gas to world markets. This does not seem in the cards today, but it opened discussions about Turkmenistan’s gas being piped northward to Kazakhstan’s offshore to join the gas pipeline to Azerbaijan. The TCOP’s construction would open the possibility for the Trans-Caspian Gas Pipeline (TCGP) from Turkmenistan to finesse political costs by sharing the same route. But since the TCOP from Kazakhstan to Azerbaijan would come online only in the 2020s, it would make better sense (and be more economical) to construct the TCGP from Turkmenistan directly to Azerbaijan, and to do so sooner rather than later. The TCGP’s engineering and planning was completed long ago: implementation still awaits only a political decision to proceed.

CONCLUSIONS: Kazakhstan’s and Azerbaijan’s TCOP project highlights the economic significance of the OBP, which was a geopolitical flashpoint towards the end of the last decade. At that time, when it was in “reverse flow” carrying Russian oil eastward through Ukraine domestically, its optimal capacity was 285,000 bpd. It has now for some years flowed in the originally intended westward direction. The inclusion of the Brody-Adamowo pipeline on the EU’s “Projects of Common Interest” list confirms its significance as a key link in the export of Central Asian oil. It means that Brussels now takes seriously the prospect of its subsequent extension to Plock, from where an existing pipeline would, after refurbishment, take Central Asian oil to Gdansk for export to the world market via the completed the TCOTS-EAOTC system.

More in this category: « Government reshuffle in Armenia Georgian wine exports and Russia’s economic leverage »
back to top