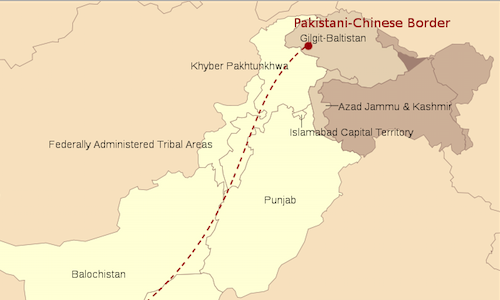 BACKGROUND: The US$ 46 billion China-Pakistan Economic Corridor (CPEC), a network of highways, railway lines, oil pipelines, electrical power grids, fiber optic cables and special economic zones, linking the Chinese trading hub of Kashgar in Xinjiang province with the Pakistani port city of Gwadar, which is located near the strategic Straits of Hormuz, has run into some trouble in the Gilgit-Baltistan region. Huge protests have erupted there over the CPEC project.

As in Baluchistan where Gwadar is located, in Gilgit-Baltistan too local residents are not opposed to the project itself but fear that they are being excluded from its benefits. They are not being consulted on the project. Although Gilgit-Baltistan plays a key role in the CPEC project – all roads and pipelines crossing into China from Pakistan will run through this mountainous region – not a single Special Economic Zone is being set up there. Adding to local ire is the police’s heavy-handed response to mass protests; a crackdown in August resulted in the arrest of over 500 locals, including Gilgit’s top political activist, Baba Jan. Several activists have been slapped with sedition charges. Calls for a rollback of the CPEC project and withdrawal of Pakistani security forces from Gilgit-Baltistan are growing louder.

Gilgit-Baltistan’s strategic significance is enormous. It nestles between Xinjiang Province in China, Afghanistan’s Wakhan Corridor, Azad Kashmir and Khyber Pakhtunkhwa in Pakistan, and India’s Jammu and Kashmir. It is the only land link between Pakistan and China.

A part of the erstwhile princely state of Jammu and Kashmir, Gilgit-Baltistan constitutes a large chunk of the territory that Pakistan occupied during the 1947-48 India-Pakistan war. India lays claim to this territory and accuses Pakistan of illegally occupying it. It has protested China’s infrastructure projects in Gilgit-Baltistan and is strongly objecting to the CPEC project running through this territory.

In addition to Gilgit-Baltistan’s disputed status is its undefined relationship with Pakistan. At international forums Pakistan maintains that Gilgit-Baltistan is part of the dispute with India over Kashmir and that its future should be decided after a plebiscite as stated in United Nations resolutions. Hence, it has not been made a part of Pakistan and is not mentioned in the Pakistani constitution. Neither are its people conferred with Pakistani citizenship. They do not vote in national elections and are not represented in Pakistan’s parliament. Although a Gilgit-Baltistan legislative assembly was created in 2009, it is the federal government that wields real power in the region.

Thus, Pakistan is not only occupying Gilgit-Pakistan but also its standing there does not have the legal cover of its own constitution. This has implications for the CPEC project.

IMPLICATIONS: The CPEC project runs through restive regions. While Xinjiang is home to a secessionist movement, the western alignment of the Pakistan leg of the corridor runs through the insurgency-wracked provinces of Khyber-Pakhtunkhwa and Baluchistan. The Gwadar port complex is also in Baluchistan. There is concern in Pakistan and China that roads, pipelines and other CPEC infrastructure in Baluchistan could come under attack from Baluch insurgents and others opposed to the project. In March 2015, for instance, five oil tankers carrying fuel from Karachi for a Chinese company working at the Saindak copper project in Baluchistan were set ablaze by suspected militants of the Baluchistan Liberation Army. In May this year, a Chinese engineer was injured in a roadside blast carried out by a group opposed to the CPEC project. Then in August, a suicide bombing in Baluchistan’s capital, Quetta, which lies on the Western Alignment of CPEC, killed 70 people.

Consequently, investment in the restive provinces of Khyber-Pakhtunkhwa and Baluchistan is being kept to a minimum, much to the chagrin of the Baluchis. Additionally, Pakistan is setting up a Special Security Division (SSD) comprising 9,000 soldiers and 6,000 paramilitary personnel for the security of the project and individuals, especially Chinese nationals working on CPEC-related projects.

Gilgit-Baltistan is less restive than Baluchistan. However, it has witnessed serious sectarian conflict in the past and Sunni extremists have carried out major attacks against the predominantly Shia local population. Besides, mass protests against the CPEC project and Pakistani authorities are gathering momentum. Complicating Pakistan’s troubles with Gilgit-Baltistan is India’s claim to this region, which has lately articulated more robustly.

In his speech on the occasion of India’s independence, Prime Minister Narendra Modi made an oblique reference to the grave human rights situation in Baluchistan, Gilgit-Baltistan and other areas of Pakistan-occupied Kashmir. Only a few days earlier, he had stressed the need to raise the plight of people in these three areas at international forums. The Modi government can be expected to step up efforts to reach out to Baluchi nationalists and the people of Gilgit-Baltistan in the coming months and to assert its claims over Gilgit-Baltistan more vigorously. Not surprisingly, China and Pakistan are worried. Will India’s stirring of the bubbling cauldrons in Baluchistan and Gilgit-Baltistan exacerbate the security situation there? Importantly, what would happen to Pakistan’s already tenuous and illegal control over Gilgit-Baltistan?

Pakistan considers elevating Gilgit-Baltistan’s status to that of a province or a provisional province. China presses for this as it wants legal cover for its billion dollar investments in the CPEC project. But this is fraught with problems for Islamabad. Granting provincial status to a Shia-dominated region is unpopular in Sunni-dominated Pakistan. It is seen as paving the way for its secession from Pakistan. Additionally, legally absorbing Gilgit-Baltistan into Pakistan would require Islamabad to shift away from its decades-old stance of supporting a plebiscite in all territory of the former princely state. It would involve Islamabad compromising on its larger Kashmir agenda and be seen as a betrayal of the “Kashmiri cause.” It would also be opposed by pro-independence Kashmiris on both sides of the Line of Control. Consequently, whether or not to make Gilgit-Baltistan Pakistan’s fifth province will not be an easy decision for Islamabad.

While India would object initially to Pakistan’s formal integration of Gilgit-Baltistan, the move could open up an opportunity to settle the Kashmir dispute with Pakistan. After all, India is in favor of freezing the status quo, allowing both countries to keep territory under their control by making the LoC the International Border.

Could CPEC then trigger a process to end the India-Pakistan dispute over Kashmir?

CONCLUSION: The Gilgit-Baltistan region is almost as central to the CPEC project’s success as the Baluchistan province. Unrest there and questions regarding Pakistan’s control over the latter are making Pakistan and China nervous, especially in the context of India asserting its rights over Gilgit-Baltistan. The implications for the CPEC project are enormous. As a former Indian foreign secretary recently observed, “Without Pakistani control over this disputed territory [Gilgit Baltistan] there would be no CPEC.” What steps Pakistan takes to strengthen its control over Gilgit-Baltistan and importantly, to endow its relationship with the region with some legality will be keenly watched in Beijing as well as Delhi.

More in this category: « Technoparks in Kazakhstan: will they help develop the innovation sector? The “North-South” transport corridor finally kicks off »
back to top