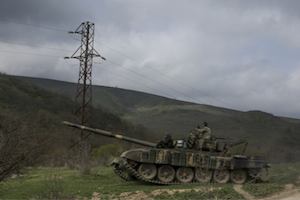 BACKGROUND: The sudden escalation of tensions in early April along the line of contact between Armenian and Azerbaijani armed forces led to significant human losses for both sides. The four-day war displayed a level of violence not seen since the 1994 ceasefire agreement. Minor border skirmishes occurred in August 2014, but these ended after early intervention by Russia. On that occasion, the timing of both the escalation and Russia’s intervention were noticeably politicized – taking place just prior to NATO’s Wales Summit in September 2014. In advance of the summit, Moscow signaled to both Azerbaijan and Armenia that they should not support NATO’s stance on the Ukraine conflict.

In the latest round of conflict, the expert community has sought to draw connections to Turkish-Russian tensions, suggesting that Nagorno-Karabakh is a kind of proxy war, due to Ankara’s support for Azerbaijan. But a closer look suggests that Ankara’s stance on the Nagorno-Karabakh conflict has changed little over the past few years, even compared to when relations with Moscow were closer. At present Turkey’s support is a message of political solidarity – without any promise of military support if the hostilities evolve into a full-scale war.

The argument that the timing of the hostilities is connected to geopolitical factors seems questionable. Moscow already has influence over the peace negotiations, and there was simply no need to wait for any particular moment to increase its clout. Both Baku and Yerevan expect Russian involvement. For that reason, the escalation of hostilities was more akin to a mini war between Armenia and Azerbaijan. The key line of enquiry is the strategic calculus that led to this level of hostilities in early April.

IMPLICATIONS: The reasons for Azerbaijan’s military offensive were a combination of perceived military and political necessities. Irrespective of who fired the first shot, Azerbaijan’s militarily offensive was likely long-planned, aimed at weakening the Armenian military’s line of defense in order to gain tactical advantages along the line of contact. The involvement of special forces, supplemented by limited air force support, enabled Azerbaijan to gain three strategic heights – after which the mission was concluded. Therefore, by April 3, Baku declared a unilateral truce. However, the involvement of heavy artillery was deceptive, creating the illusion of a much larger military operation. In fact, the operation was very limited, and did not aim to regain control over any territories under Armenian occupation.

The armed offensive had broader goals in political terms, but militarily it was clearly aimed at responding to a change in Armenia’s strategy. In February 2016, Armenia’s First Deputy Minister of Defense David Tonoyan declared that Yerevan was moving from a “static defense” strategy to one of deterrence, which included pre-emptive strikes. In practice, this meant that due to Armenia’s military advantage along the line of contact, it could cause greater casualties on the Azerbaijani side. The April offensive, by gaining new strategic heights, suggests a response to Yerevan’s “deterrence strategy.”

In the political realm, Azerbaijani authorities officially acted on its verbal threats to take military action in the absence of productive diplomatic negotiations. The expectation was – and is – that the mediators will re-engage, and that Yerevan will be compelled to return to the negotiating table. The other anticipated consequence is damage to Armenian morale; Baku has destroyed the perception that its threats to pursue a military solution is a “myth”, compounded by the fact that Yerevan experienced more casualties on the battlefield than expected.

If the aim was to avoid further military hostilities and ensure that both parties return to the negotiating table with a constructive approach, however, the effect of the four-day war may not have been what Azerbaijan expected. On the one hand, the conflict led the Armenian public to question the effectiveness of the Yerevan government. In addition, the fighting stoked considerable public anger at Russia’s apparent neutrality towards the situation, which Armenia did not expect from its military ally. On the other hand, the conflict has led to a consolidation among Armenia’s political parties, which will likely lead to a harsher response along the line of contact in the future.

Thus from Azerbaijan’s perspective, beyond the damage to Armenia through its symbolic successes on the battlefield, the real benefit for Baku has been in domestic politics. Regardless of political affiliation, the population united in support of the military offensive, which increased the popularity of the government, especially the Ministry of Defense. Since his appointment in 2013, Defense Minister Zakir Hasanov has sought to eliminate corruption in the army in tandem with overhauling military capabilities. But there is a gap between public expectations and reality; the population had expected – at minimum – the liberation of one or two occupied territories. This is a result of miscommunication, and also due to misinformation published by local media in both Azerbaijan and Armenia.

The danger on the domestic front is that the population overestimates the likelihood that force will be applied to resolve the conflict, and also does not fully recognize the limitations to Baku’s room for maneuver. With the decline in oil prices, the Trans Anatolian Natural Gas Pipeline (TANAP) and Trans Adriatic Pipeline (TAP) projects require more Western and international support than anticipated. But if a military conflict breaks out, external funding is unlikely to materialize. Thus the government must balance the public appetite for military intervention with the need to ensure a stable investment environment.

So far, Azerbaijan’s expectation that the negotiations will be re-energized have, despite increased international attention, remained unfulfilled. Only Russia has been active, with the “shuttle” diplomacy of the Russian Prime Minister and Foreign Minister. Those who have sought to identify a “Russian hand” in the recent clashes are also skeptical of Moscow’s intentions in these diplomatic activities. The reality is that the Azerbaijani authorities believe that Moscow can solve the conflict, but perhaps not in a way that satisfies both parties.

Azerbaijan’s dilemma is that a strong Russian role in conflict resolution will increase Moscow’s political clout, and Baku will likely be asked to join the Eurasian Economic Union and the Collective Security Treaty Organization. Until now, the Karabakh conflict has served as a pretext for the authorities in Baku to decline Moscow’s request, on the grounds that Armenia is also a member of those organizations.

CONCLUSIONS: Following the outbreak of hostilities along the line of contact between Armenia and Azerbaijan, the expectation was that this momentum would bring the parties to the negotiating table. Russia is still actively preparing for a meeting between the Azerbaijani and Armenian presidents. It is hard to predict what this process will bring. Moscow oversaw a similar process during 2008-2011, when Russia sought to rehabilitate its international image after the August war with Georgia, attempting to demonstrate that Moscow is a facilitator of peace processes. The Nagorno-Karabakh conflict resolution process under Medvedev’s presidency was part of this effort; however, the 2011 Kazan meeting marked the failure of these negotiations. If the negotiations fail again, especially after the April hostilities, we may see a resumption of hostilities.

Image Attribution: www.voanews.com, accessed on May 2, 2016

More in this category: « The IMU is extinct: what next for Central Asia's jihadis? Fighting in Nagorno-Karabakh and the ineffectiveness of the Minsk Group »
back to top