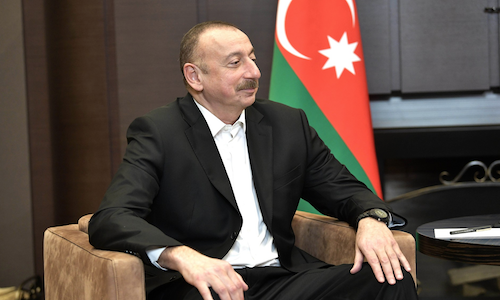 BACKGROUND: Following presidential elections on March 11, the Parliament of Azerbaijan on April 21 confirmed Novruz Mammadov as the new Prime Minister of Azerbaijan. In that position, Mammadov replaced Artur Rasizade, one of the longest serving prime ministers in the world, who has been in charge of the Cabinet of Ministers of the country for 22 years. Mammadov, who previously served as assistant to President Aliyev on international affairs and as head of the foreign policy department of the Presidential Administration, received the unanimous support of the parliament. Fluent in French, Russian, and English, Mammadov is regarded by many inside and outside the country as a hard-working, loyal and professional governmental member, whose public service record has been recognized by many international awards and honours.

Simultaneously, President Aliyev issued a statement thanking the 83-year old outgoing Prime Minister, Artur Rasizade, for his service to the country. He highlighted the important work done by Rasizade during difficult 1990s when the country faced severe economic and political problems.

On the same day, President Aliyev confirmed the new composition of the Cabinet of Ministers. While many of the ministers – especially in law enforcement and economic sectors – retained their positions, the large number of new appointments was somewhat surprising. What is striking is that many of the new appointees are fairly young officials, mostly in their early forties. The Head of the Migration service has been replaced by Vusal Huseynov, a Harvard graduate. Inam Karimov, head of the ASAN one-window document issuing service famous for its transparency and easy service, was appointed the new Minister of Agriculture. Karimov holds an L.M. and PhD from France’s Sorbonne, and is the recipient of a UN award for best public service. One of the youngest members of Parliament and a Ph.D. in Chemistry, Fuad Muradov, became the new Head of the Diaspora Committee. Two other members of Parliament, Mukhtar Babayev and Rovshan Rzayev, were appointed to the positions of Minister of Ecology and Natural Resources and Head of State Committee on Refugees and Internally Displaced Persons, respectively. Duke University graduate Samir Nuriyev became Head of the State Committee for Architecture and City building. Two young deputy ministers, Jeyhun Bayramov and Sahil Babayev, were appointed Minister of Education and Minister of Labor and Social Protection, respectively. The Head of State customs was fired and replaced by his deputy. Several weeks before the elections, moreover, the Minister of Taxes was fired and replaced by the active and reform-oriented minister of Education Mikayil Jabbarov, a member of the New York bar.

IMPLICATIONS: These appointments appear to have been generally welcomed by the population. They indicate that President Aliyev is keen to deepen economic reforms. The country has been facing economic challenges since 2015, when oil prices in world markets fell and the national budget experienced significant challenges. The national currency, the manat, was devalued twice and the banking sector experienced severe liquidity problems, which affected entrepreneurship and increased the risk of bankruptcy among local barrowers.

The government has undertaken rapid and large-scale reforms to remedy the situation. A national road map for economic reforms has been prepared in partnership with McKenzie company. The road map outlined eleven key areas for the development of the non-oil sector, including agriculture, light industry, tourism, and transport. It is believed that in these areas, Azerbaijan possess competitive advantages, and can increase its export potential.

Early steps provided some successful results. Tourism in the country has increased significantly in last three years due to the simplification of visa procedures. The number of Arab and Iranian tourists has risen threefold, according to official statistics, which has boosted local hotel, transportation and food industries. The government has undertaken large-scale investments in agriculture, and in 2017 tomatoes became the country’s second largest export product. Many greenhouses and warehouses have been built in and around Baku. Significant changes have been done in customs operations, making it easier for companies to export and import goods.

Nevertheless, the pace of these reforms remained slower than expectations. Many ministers continued to rely on old practices and prevent the implementation of reforms. In this context, the changes in the cabinet of ministers and the appointment of young cadres indicate the will of the President to speed up reforms and eradicate some negative elements, such as corruption and bureaucracy in the government bodies. The migration service has been mentioned by many foreign companies as one of the biggest obstacles to doing business in the country. Receipt of work permits and residence permits has been afflicted by corruption. The new head of the service is tasked to clean up the system and create transparent and accountable procedures. The same goes for the customs, taxes and labour ministries which constitute the backbone of the economic policy of the country.

President Aliyev is pushing for the diversification of the economy and development of non-oil sector in an effort to increase the welfare of people and address some problems such as unemployment and poverty. These themes were highlighted in the recent presidential campaign. President Aliyev is focusing on economic issues as the country faces a growing young population, high demands on social services, infrastructure and employment. Oil and gas have served the country well in the past two decades, which has resulted in a significant increase of GDP and a decrease of poverty from 56% to 5%. Yet, without major reforms and liberalization of the economy, further results will be under risk.

CONCLUSIONS: Much is expected from the new cabinet. Previous business practices in the country were often subject to criticism by foreign investors. New, young ministers are expected to tackle corruption, liberalize the economy and eradicate barriers to the development of entrepreneurship, export-oriented industries, mid-size businesses. Transparency, predictability and clarity in tax and customs practices are much demanded by the business community.

If the new cabinet manages to achieve these developments, Azerbaijan will ensure sustainable development for the next decade, stable inflow of revenues into the national budget and provide opportunities for the rising population in terms of employment, social services and education. In this regard, the priority of the new cabinet is to attract foreign direct investment, and create a favorable business climate. Transport, agriculture and industry can been the backbone of the new economy of Azerbaijan.

More in this category: « Families of ISIS Fighters Return to North Caucasus Continued Reshuffle in Dagestan's Government »
back to top