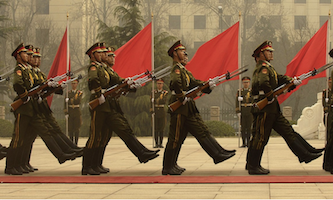 BACKGROUND: It is useful to see the prospect of a Chinese base in Badakhshan in context. First, it is close to neighboring Xinjiang, where China is so perturbed over continuing Islamic unrest that it has instituted a true surveillance state regime in the region. A base in Badakhshan would not only disrupt contacts between Uyghurs in China and their brethren abroad, it is also intended to disrupt ISIS and other similar groups from building links with and acting in Xinjiang. This base would also signify to Central Asian governments the seriousness of China’s commitment to fight terrorists abroad and use coercive measures against states harboring them to prevent them from getting to China.

These developments also dovetail with China’s interest in Afghanistan’s stability and reports of China’s willingness to assume a mediator’s role in its war. For years, Beijing has maintained contacts with the Taliban and has supported the idea of a reconstituted Afghanistan with Taliban elements in its new, postwar, government.  If Beijing calculates that Chinese mediation, either alone or with other foreign governments, would reduce the terrorist threat from Afghanistan to China, this might actually provide China with a stronger basis for keeping a base in Afghanistan.

A third motive is the fact that China is now investing enormous sums throughout South and Central Asia as part of its Belt and Road Initiative. In Pakistan alone, China has pledged US$ 57 billion to the China-Pakistan Economic Corridor (CPEC). Both the Pentagon and foreign observers believe that China is or will be building a base in Pakistan, possibly beyond the Gwadar Port. China and Pakistan have both stated that they are considering adding Afghanistan to their joint CPEC projects. Thus, given the level of terrorism in both Pakistan and Afghanistan as well as Xinjiang, a military move to defend such huge investments is not a surprising outcome. This would corroborate the argument that China’s Central Asian policies are to a large extent outward projection of is domestic policies that have aimed, apparently with little success, to pacify and stabilize Xinjiang.

IMPLICATIONS: However, beyond the immediate context of Xinjiang, Pakistan and Afghanistan, this move should be examined in a broader context. Over the last few years, China has embarked on a general naval and base building thrust across Asia and the Indian Ocean. The declaration that China intends to be a great polar power, its establishment of a base at Djibouti, along with aggressive maritime forays into the East China Sea, the South China Sea, and now the Indian Ocean as China is sending ships to the Maldives to challenge India directly, betoken a general assertiveness.

The growing rivalry with India also encompasses Afghanistan, where Pakistan and India have reengaged in a nasty contest for influence, making Afghanistan the site of what is essentially a proxy war between Delhi and Islamabad. Building a base in Afghanistan, even if one takes the domestic, commercial, and regional imperatives cited above into account, fully comports with the idea that China not only has to protect its foreign investments, it must also project power abroad.

Thus there is no contradiction between seeing this future base as an emanation of the internal and regional security drivers of Chinese foreign policies as well as a simultaneous manifestation of the imperial and great power forces that are also factors driving Chinese foreign and defense policies. Taken in the context of the dispatch of ships to the Maldives and the strengthening ties with Pakistan, we can see this move in the light of the growing Sino-Indian rivalry for influence and leverage across South and Central Asia. Indeed, the base also represents a discreet but tangible example of China placing its thumb upon the scale of the Indo-Pakistani rivalry for influence in Afghanistan.

This Chinese move also has potentially detrimental implications for its relationship with Russia. For several years, analysts have recognized that China has become the preeminent financial and economic foreign power in Central Asia, thereby supplanting Russia. Moscow’s has displayed concerns about even more Chinese aggrandizement of its economic power at Russia’s expense in the Shanghai Cooperation Organization. Yet, Beijing has been extremely careful to show its willingness to work with Russia and, most importantly, to refrain from challenging Moscow’s military preeminence in Central Asia as a security provider. Indeed, it has largely cooperated with Moscow regarding the Taliban lately and a growing Russian partnership with China is underway where Moscow has even accepted to play second fiddle to the BRI in Eurasia.

However, any hint that China is seriously contemplating to project its own unilateral military power into Central Asia will almost certainly trigger alarm bells in Moscow.  Although it will become increasingly difficult for Moscow to sustain and project credible military power in fact rather than in rhetoric to Central Asia, admitting this would represent a major geostrategic defeat. Russia’s displacement from primacy in Central Asia, even if done with the utmost finesse, will drive a stake through the whole edifice of Putin’s project to persuade himself, his domestic audience, and the world that Russia is truly a great power that must be consulted on all major international issues.

It would also undercut the “comprehensive strategic partnership” that now formally exists between Beijing and Moscow and undermine any pretense that it is the West and specifically Washington that threatens Russia. Indeed, the Chinese aspiration to play a significant hard security role in Central Asia represents a vote of no confidence in Russia’s ability to defend China’s burgeoning economic and political interests there. That is certainly how Moscow but also Central Asian capitals will see such a program of action. Unless Moscow retaliates, it will de facto have confirmed this prognosis about its Central Asian prospects. Yet its hands vis-à-vis China are clearly tied given the state of its relations with Washington.

Any Chinese base building in Central Asia, like its efforts to undertake naval power projection abroad, is extremely consequential. Therefore, China has good reason to deny that it is seeking a base in Afghanistan or elsewhere in Central Asia. Yet the logic of its expanding global and regional positions across Asia inevitably pushes in that direction, as seen in its naval policies even as far away from its shores as the Arctic. In fact, one way to envision what China has been doing in Central Asia is that it has been building capacity, both its own and that of the states where it is investing so many resources.

CONCLUSIONS: Paradoxically, China is apparently exploring the option of a base in Afghanistan at the same time as its overbearing posture and excessively one-sided gains form the BRI are beginning to make themselves felt in many Asian countries and as the overall Asian opposition to its Central, South, and East Asian policies is coming together. The correlation of these opposing trends not only suggests that the next turn of the so-called new great game will assume a primarily Asian dimension. It also increases the likelihood that the Central Asian security agenda will in the future come closer to the general East and South Asian agendas, largely due to the centrality of China as an actor in all three zones. China’s efforts to assert its interests, power, and influence on the Asian and world stages will invariably drive a series of countermoves from all those states who are on the receiving end of that assertiveness. There is no guarantee; especially given the dynamism we now see in Central Asia, that those reactions will be favorable to China. China may now be building a base to project military power and influence beyond its borders but there is good reason to suspect that the results will not be an unmixed blessing for Beijing.

More in this category: « The Reemerging Self-Confidence of Central Asia Central Asia After Astana: From Integration to Cooperation »
back to top