On September 25, the UN concluded the 72nd session of its General Assembly at the headquarters in New York. Over a hundred heads of state and government, as well as foreign ministers and chiefs of delegations took part in the event. For the first time in 11 years, all member and observer states of the UN addressed the General Assembly. Uzbekistan’s President Shavkat Mirziyoyev also delivered a speech from the high rostrum of the UN, drawing considerable interest both inside Uzbekistan and abroad. Mirziyoyev stated that his government has taken effective measures to eradicate child and forced labor, abolish exit visas, intensify dialogue with international human rights organizations, and placed law enforcement bodies under parliamentary and civil control. 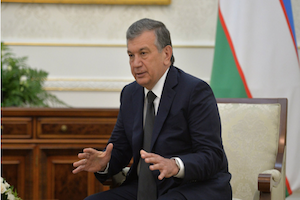 BACKGROUND: President Mirziyoyev proposed the development of a UN International Convention on the Rights of Youth, a unified international legal instrument aiming to form and implement youth policy in the context of globalization. Mirziyoyev pointed out that young people are today the largest generation in the history of mankind, numbering 2 billion.

Mirziyoyev also put forward a proposal to adopt a special resolution of the General Assembly on “Education and Religious Tolerance” aiming to ensure religious freedom and protect the rights of believers, as well as eliminating illiteracy and ignorance.

Mirziyoyev’s speech aimed to present a renewed and proactive Uzbekistan to the rest of the world; a country that will not be an “outside observer” of international processes, and Mirziyoyev himself as a leader undertaking uncompromising reforms for the sake of the country’s development, who will stick to the chosen path.

The focus on Central Asia was apparent in Mirziyoyev’s speech, which included an appeal for the progressive development of regional cooperation. He stressed that “a peaceful, economically prosperous Central Asia” is “the most important goal and the key task of Uzbekistan.”

Uzbekistan, sharing borders with all Central Asian states, indeed has a strong interest in regional cooperation. Tashkent is acutely aware that neither security issues, nor challenges associated with major regional transportation, communication and energy projects can be resolved without active interaction with the countries of the region, and the promotion of regional integration.

Mirziyoyev’s statement was not merely a declaration. From the first days of his presidency, President Mirziyoyev has taken decisive steps towards rapprochement with neighbors and resolving longstanding regional problems that have had a negative impact on the lives of ordinary citizens. Mirziyoyev has met with all fellow Central Asian leaders, and made state and working visits to Turkmenistan, Kazakhstan and Kyrgyzstan. A visit to Tajikistan is planned in the near future.

Mirziyoyev’s visit to Turkmenistan served to open a new page in Uzbek-Turkmen relations. The two countries concluded a Treaty on strategic partnership and agreed to open railway and automobile bridges across the Amu Darya, thus realizing an important part of the Uzbekistan-Turkmenistan-Iran-Oman transportation and communication route.

Meetings between the Uzbek and Kazakh leaders have also produced unprecedented results, not least the adoption of a Joint Declaration on the further deepening of the strategic partnership and strengthening of good-neighborly relations, a “Road Map” for joint activities. For the first time in their history, the two countries arranged business forums resulting in the conclusion of trade contracts and investment agreements worth a total of about US$ 1.2 billion.

During the President’s visit to Kyrgyzstan in September this year, the two states signed a Treaty on the State Border between Uzbekistan and Kyrgyzstan for the first time in 26 years. The parties agreed on the delimitation of more than 85 percent of the border, amounting to a breakthrough in the resolution of accumulated points of contention between the two countries. The agreement on delimitating most of the border with Kyrgyzstan not only serves to resolve a bilateral disputes, but removes the acute conflict potential from the entire regional agenda, lowers the risk of interethnic clashes, and contributes to an increase in the level of political trust between countries.

An important achievement was also the promotion of contacts between ordinary citizens. The work of a number of checkpoints has been resumed. On the day of its opening, five thousand people crossed over the Uzbek-Kyrgyz border through the checkpoint "Dustlik".

The whole region received a new stimulus in trade and economic cooperation. Economic turnover between Uzbekistan and the other countries of Central Asia in the first six months of 2017 grew by 13 percent.

IMPLICATIONS: The initiative of the leader of Uzbekistan to hold regular consultative meetings among the heads of Central Asian states is seen as a true breakthrough.

Firstly, Tashkent's proposal to hold regular consultative meetings among the heads of Central Asian states was in fact a timely response to the long-overdue request for regional rapprochement. All the states of the region share many common interests and feel the need to solve common problems jointly. At the same time, despite the objective need to create their own and purely regional interaction platform, the leaders of the countries of Central Asia have so far met only during bilateral visits or summits within the framework of the CIS and the SCO, as well as other international organizations and formats.

The platform proposed by Uzbekistan allows efficient coordination in solving many problematic issues on the Central Asian agenda, the settlement of which cannot be achieved unilaterally or bilaterally.

Secondly, as Minister of Foreign Affairs of Uzbekistan Abdulaziz Kamilov stated, the initiative of the Uzbek leader does not pursue the goal of creating any supranational bodies.

Thirdly, as the foreign minister also stressed, the work of this platform is not aimed against the interests of extra-regional players. Stability in Central Asia meets the interests of all external forces. Stimulating regional cooperation opens new opportunities for the implementation of mutually beneficial regional projects in Central Asia with the participation of foreign partners.

CONCLUSIONS: Tashkent's proposal on the formation of a consultative mechanism in Central Asia for the purpose of joint discussion and working out solutions to current regional problems guarantees an increased economic potential for Central Asia, ensuring stability and sustainable development of the countries of the region, and thus the well-being of the population.

The initiative of the President of Uzbekistan will be further developed during the forthcoming high-level International Conference called “Central Asia: One Past and Common Future, Cooperation for Sustainable Development and Prosperity” to be held under the aegis of the United Nations in Samarkand in November. At this event, the participation of foreign ministers of all countries of the region, the leadership of the UN and international organizations, as well as official representatives of many foreign countries is planned. It will be an occasion to take Central Asia’s development forward.

AUTHOR’S BIO: Eldor Aripov is Director of the Center for International Relations Studies in Tashkent, Uzbekistan.