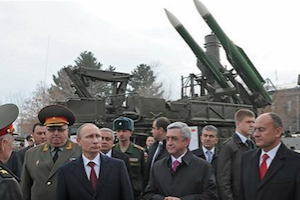 BACKGROUND: The annexation of Crimea has had a profound impact on the Black Sea strategic environment, giving rise to a new geopolitical paradigm. It dramatically altered the entire naval status quo of the region, portending the proliferation of A2/AD capabilities – Russia’s newly adopted strategy and a critical instrument in its confrontation with the West. This approach enables Moscow to keep NATO forces far away from the coastline, substantially hindering their operational movement. The boost of Russian A2/AD capabilities also complicates NATO’s efforts to create sustainable infrastructure for collective defense and deterrence, with consequences for the security of NATO’s partners in the region.

Despite financial and technological difficulties that appear to limit Russia’s options for an effective response to the implementation of NATO’s defense and deterrence strategy, Moscow also faces objective political obstacles. A case in point is Georgia’s aspiration for Euro-Atlantic integration, which is a geographic limitation to Russia’s bid for Black Sea regional domination.

To this end, Moscow seemingly seeks to drag Armenia, its regional client state, into Russia’s concerted military activities. Armenia is a member of the Moscow-led Collective Security Treaty Organization (CSTO), challenged by a political conflict with NATO member Turkey and a military conflict with Azerbaijan. Its security ties with Russia are underpinned by the bilateral agreements reached in 1995, postulating the continual deployment of a major Russian military contingent, including the 102nd military base in Gyumri and the 3624th airbase near Yerevan. These units constitute an integral part of Russia’s Southern Military District along with forces in the North Caucasus Military District, the Black Sea Fleet and air defense units in Crimea, as well as bases in South Ossetia and Abkhazia. The united air defense initiative with Armenia will consolidate the operational abilities of the Southern Military District – thereby reinforcing the A2/AD strategy in the region.

Against the backdrop of consistent militarization of Crimea, the united air defense system in the Caucasus will plausibly assume functions similar to the joint air defense bubble forged by Minsk and Moscow for the Baltics.

At least four divisions of S-300PS (NATO reporting name SA-10 Grumble) surface-to-air missile systems were in 2014 dispatched to Belarus as reinforcement to the same systems operating in Kaliningrad, Russia’s enclave in the Baltics. This covenant with Belarus plays an important role in covering the 65-kilometer land corridor between Kaliningrad and Belarus, which also constitutes the only land access between Poland and the allies most vulnerable to Russia’s assertive posture – Lithuania, Latvia and Estonia.

Moscow has seemingly managed to design a similar power projection in the South Caucasus by drawing Armenia into its strategic operational air space. Via the united air defense accord with Yerevan, Moscow is enhancing its air denial and controlling capabilities to the detriment of NATO and its regional partners.

IMPLICATIONS: The emergence of a united air defense system with Armenia should be examined in the context of Russia’s measures aimed at targeting NATO’s interests in the wider region. The document envisions the subordination of Armenia’s air defense assets under the operational strategic command of Russia’s Southern Military District. This prospect implies a coordinated operability of all military assets ranging from Crimea to Armenia. The united air defense system presents a constitutive mechanism of collective defense based on hierarchic principles. As such, according to Article 6, the strategic command of the joint collective air defense system in the Caucasus will henceforth be a duty of the Russian Aerospace Forces’ supreme commander in case “potential threats” emerge.

In Moscow’s perspective, the spectrum of “potential threats” in the Black Sea-Caucasian region is clear. Referring to the military doctrine, recently adapted and imposed by Vladimir Putin, any NATO activity in Eastern Europe – and especially the partnership programs with post-Soviet states, is perceived as “potential threat” to Russia’s interests. Against this backdrop, it could be assumed that Georgia, being sandwiched between Russia and Armenia, represents a strategic gap in Moscow’s regional A2/AD buildup. In other words, by contributing to NATO’s regional agenda, Georgia thereby constitutes a “potential threat” that would need to be neutralized.

At the tactical level, Russia acquires access to air defense assets stationed in Armenia. Armenia possesses surface-to-air missile systems, including a few battalions of relatively advanced S-300PS that are also in operation on the territory of Nagorno-Karabakh.

In addition, in 2014–15 Russia deployed a battalion of S-300B in its 102nd military base. These missiles also increased the risks for Armenia and Georgia, entangling these countries in Russia’s regional competition for power.

With regard to Georgia, Moscow’s initiative to absorb the Armenian air defense system, accompanied with Russia’s military buildup in Georgia’s breakaway regions, will likely give rise to additional concerns in Tbilisi. The integrated air defense system was given a “separate region” status to codify Armenian air space. In compliance with the accord, the parties will allocate the assets of the air defense system for carrying out collective security control “of the region,” which implies that Russia managed to institute a “system of control” upon the South Caucasus airspace.

At the very least, this will complicate the defense environment for Georgia. The initiative will also likely increase military tension in the Black Sea security environment. The way Russia treats such agreements with its CSTO allies is reminiscent of the principles of the Warsaw Pact, according to which the strategic command of all ally armies belonged to Moscow. The Kremlin’s policy-makers are seemingly endeavoring to map out a similar hierarchic structure in relation to Armenia’s, Kazakhstan’s and Belarus’ armies.

CONCLUSIONS: It is important to note that Moscow views all military-political initiatives in the Black Sea-Caucasus region primarily through the prism of competition with the West. At this particular juncture, increased practical security cooperation drawing Georgia and Armenia under the auspices of NATO could potentially derail Russia’s intentions to consolidate its influence over Armenia’s military. Meanwhile, the U.S. and NATO’s new programs for boosting regional stability could pose as an alternative to Russia and increase Armenia’s maneuverability in terms of defense policy-making. In other words, a proactive U.S./NATO engagement in Black Sea security affairs would likely provide a substantial opportunity for Armenia to counterbalance Russia’s influence.

Given Moscow’s previous ambivalence in honoring its commitments to its CSTO ally Armenia, the expanded defense ties with Russia has triggered a strong disaffection within Armenian military circles, whereas the Armenian government appeared reluctant to enter the agreement. However, as some Armenian parliamentarians have suggested, a delay in ratifying the agreement could have induced Moscow to put pressure on Yerevan by cancelling the delivery of military equipment in response.

Finally, a bilateral agreement between Tbilisi and Yerevan is of paramount importance to address the potential threat to Georgia emanating from a joint Russian/Armenian air defense engagement. Such an agreement should have reassuring elements committing both states to refrain from activities that could potentially affect each other’s security and defense.

AUTHOR’S BIO: Eduard Abrahamyan, PhD, is a defense and regional security analyst and scientific researcher at the University of Leicester, UK. His expertise is on NATO’s strategy evolution and adaptation in the Eastern Europe and Black Sea regions.

More in this category: « Chechen authorities raise pressure on human rights organizations The phantom menace of ISIS in Northern Afghanistan »
back to top