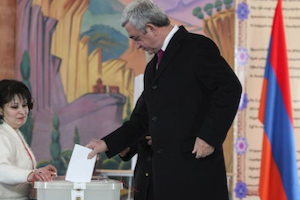 BACKGROUND: Following a positive vote in the National Assembly (parliament), a referendum was held on December 6. The draft constitution included several non-political clauses such as non-discrimination, children’s rights, and the provision of state compensation for victims of judicial error. The Council of Europe’s advisory body on constitutional law considered the draft proposal “a very good basis” for reform. However, the country’s political system will change radically, shifting from a presidential to a parliamentary republic. The prime minister will have extended executive powers, including as the supreme commander of the armed forces; whereas direct presidential elections will be abandoned, making the president a ceremonial figure. However, amendments concerning the political system will come into force only after the end of Sargsyan’s second presidential term in 2018.

The amendment package was drafted by a commission appointed by the president, without any members from the opposition or civil society. The amendments resemble few other electoral systems (but carries similarities to the 2015 Italian electoral law) and aim to form a “stable majority”: if the parliamentary elections do not result in the formation of a majority, runoff voting shall take place, with a bonus to the eventual winner. The amendments also make it possible to amend the constitution in the future without referenda, through a parliamentary majority. Under the current constitution, amendments are only possible by means of a referendum, with a minimum number of votes in favor equaling 25 percent of the registered voters.

The proposed political provisions were criticized by many Armenian experts and human rights lawyers. There is a widespread opinion that the amendments will result in a permanent power grab by the ruling RPA. It should be recalled that in 2014, when the discussion about the amendments was at an early stage, Eduard Sharmazanov, the RPA’s spokesman and deputy chairman of the National Assembly, said at an RPA convention that the political system had to change and enable the RPA led by Sargsyan to rule for at least the next ten years. According to Sharmazanov, all political competition should take place within the RPA, and anyone willing to compete would have to “walk through the [RPA headquarters’] doors.” Less than a week before the referendum, RPA officials admitted that despite Sargsyan’s previous promises not to hold any state office after his presidential term, he had a “well-grounded” ambition to become prime minister or parliamentary majority leader. After the voting, the government announced that the proposed draft was accepted by a majority of the votes.

IMPLICATIONS: Like previous election campaigns in Armenia, the government-supported “Yes” campaign was financed both by the state budget and funding from politically affiliated businesses. The Minister of Defense and other cabinet members were involved in campaigning, and civil servants, school teachers, doctors and others paid from the state budget were required to campaign for “Yes.” In addition to the routine government control of broadcast media, the RPA’s vice-chair, Minister of Education Armen Ashotyan, was appointed the anchor of a new talk show on Public Television. A Council of Europe expert interviewed by Radio Liberty was astonished when asked about the appropriateness of such practices, then replied that it “totally contradicts the accepted norms and best practices.”

A report on the web portal of a well-reputed investigative journalist showed that despite the official data on emigration and the general decline in population numbers, the police database of registered voters showed considerable growth. Moreover, the difference in numbers between the entire population and announced voters was smaller than the official number of children enrolled in school and pre-school educational institutions. This mismatch is in line with Armenia’s long history of flawed electoral processes with allegations of multiple voting and ballot-box stuffing, among other corrupt practices.

After the voting results were published, it could be observed that in the largest cities, where the political opposition as well as local and international non-governmental organizations had well-trained observers at polling stations and managed to prevent some manipulations of the voting process, the turnout was low and the majority of ballots were cast against the government’s proposal. However, in smaller municipalities where no observers were present at many polling stations, a higher turnout was registered with more votes in favor. In many villages, according to official data, 100 percent of the residents voted in favor.

According to the observers, the voting process on December 6 was accompanied by “an unprecedented number of violations,” including pressure on voters, observers and journalists. The Parliamentary Assembly of the Council of Europe (PACE) delegation noted that the low turn-out “reflects the fact that the referendum was driven by political interests instead of the needs of the public,” along with several other problems, including voting lists featuring the names of people residing permanently abroad or even deceased, with a possibility of voting on their behalf; organized vote buying and carousel voting, as well as pressure on voters, etc.

The opposition, including the Armenian National Congress (ANC) and the Heritage party, whose presidential candidates (Levon Ter-Petrossian in 2008 and Raffi Hovhannissian in 2013) received hundreds of thousands of votes and managed to organize huge protest demonstrations after each election, is at present hardly capable of gathering more than a few thousand supporters for street protests despite the general disappointment with the government.

A failure to adopt the proposed constitutional reform would have been an embarrassment for Sargsyan and the RPA. However, their overwhelming control of the power structure at all levels, the media, and financial resources makes regime change only a theoretical possibility in the foreseeable future. Economic stagnation will likely continue, without any significant reform prospects.

CONCLUSIONS: Considering the RPA’s political domination and financial resources, it would likely have enjoyed a comfortable position during the next elections even without the planned constitutional amendments, especially since the Prosperous Armenia Party has stopped acting as part of the opposition (see the 03/18/15 Issue of the CACI Analyst). Also, despite statements about the need for constitutional reform for further democratization and economic reforms, the fact that the RPA currently holds a parliamentary majority, along with the presidential office, already allows it to adopt any decision unilaterally, should the political will exist to advance reforms.

President Sargsyan’s tactics are probably best explained by his concerns about a possible successor. Strong candidates with political ambitions of their own might later push the current president aside, as Sargsyan himself did with his predecessor Robert Kocharyan after being considered the latter’s faithful subordinate for many years. Moreover, Sargsyan’s most trusted people within the RPA are hardly electable, especially since presidential elections could result in the mobilization of protest votes. In Armenia, presidential elections have traditionally allowed the opposition to mobilize larger voter support, providing a window of opportunity for regime change. During parliamentary elections, however, voters are usually less engaged. Abandoning the practice of direct presidential elections will likely reduce the general public’s participation and its ability to hold the authorities accountable.

More in this category: « Azerbaijan, islamism, and unrest in Nardaran Japan's and China's different functions in Asia »
back to top