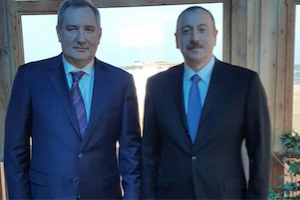 Russia’s Minister of Foreign Affairs Sergey Lavrov visited Yerevan on April 21-22, meeting with Armenia’s President Serzh Sargsyan, who stated that “by launching large-scale military operations against Nagorno-Karabakh, Azerbaijan once more proved that Karabakh cannot have anything common with Azerbaijan.” Sargsyan also highlighted that Azerbaijan’s actions have pushed the negotiation process into the distant future. In turn, Lavrov said that if the parties could develop common principles, which could serve as a basis for the preparation of legally binding documents, it would not only play a crucial role in restarting the negotiations, but also serve to contain the risk of new clashes. Lavrov reaffirmed that the Nagorno-Karabakh conflict has no military solution.

During his visit, the Russian foreign minister also met with his Armenian counterpart, Edward Nalbandian, who emphasized that calls and exhortations are not enough to make Azerbaijan sober up, and that concrete steps are needed to induce Azerbaijan to take a constructive position. The interlocutors stressed the importance of the agreements reached in 1994-1995, pertaining to the establishment of the ceasefire regime. The ministers also discussed cooperation between Armenia and Russia in the political, military-technical, economic, humanitarian and other spheres, as well as issues of cooperation under the framework of the UN, CSTO, EAEU, CIS, OSCE, CoE and other international organizations.

At a joint press conference, in response to a question on Turkey’s reaction to the recent escalation, Lavrov declared that “statements coming from Turkish authorities are absolutely unacceptable for a simple reason: they were an appeal for war, not peace, an appeal to resolve the conflict by the use of force … we are getting used to such ‘quirks’ from the current Turkish leadership.” On April 2, Turkish President Recep Tayyip Erdogan had declared that Turkey “will support Azerbaijan to the end.” In his opening remarks at a meeting with the ambassadors of the OSCE participating states, Sargsyan said that “Turkey is acting from a position of inciting a great war in the region and is explicitly encouraging the adventurist policy of the Azerbaijani leadership. Azerbaijan is bragging about its alleged victory and Turkey congratulates it on that occasion.”

Before his visit to Yerevan, Lavrov had discussed the current situation around Nagorno-Karabakh in Baku on April 7. Simultaneously, late in the evening of April 7, Sargsyan received Russian Prime Minister Dmitri Medvedev. The Armenian president said that Armenia expects “targeted statements and certain actions” from the OSCE Minsk Group Co-Chairs and ally states. Sargsyan also declared that the refusal of some Eurasian Economic Union (EEU) partners to participate in the meeting of EEU Heads of Governments in Yerevan definitely tarnished the reputation of the organization.

Another frequently discussed topic during the weeks following the escalation of the conflict was the sale of Russian arms to Azerbaijan. Sargsyan voiced this concern during his meeting with Medvedev, arguing that “the fact that the Azeris have used weapons that they have acquired recently from Russia with full force resonated strongly in Armenia. It is quite understandable since at the public level in Armenia, Russia is perceived as the closest ally and friend.” These concerns were voiced also in Berlin during Sargsyan’s joint press conference on April 6 with German Chancellor Angela Merkel. Sargsyan stated that “Russia is indeed our strategic partner and we are in the same security structure – CSTO, and it is naturally painful for us when Russia sells arms to Azerbaijan”.

The issue of arms sales provoked even more concerns after Russia’s Deputy Prime Minister Dmitri Rogozin declared that Russia will continue to supply Azerbaijan with arms “according to the contracts.” Against this backdrop, Armenia’s Deputy Minister of Foreign Affairs, Shavarsh Kocharyan, commented on Rogozin’s declaration that “a similar style cannot be typical of a state official.”

More in this category: « Georgia gears up for parliamentary elections Bishkek and Tashkent Face Uneasy Relations »
back to top