Azerbaijan and Turkmenistan Agree on the Caspian

For over twenty years, Azerbaijan and Turkmenistan have been at odds over the mid-Caspian oil and gas field that the former called “Kepez” (often rendered “Kyapaz” from the Russian) and that the latter called “Sardar.” In late 2020, they agreed to rename it Dostlug/Dostluk, meaning “Friendship” in their Turkic languages. On January 21, they signed a Memorandum of Understanding (MoU) agreeing on the terms for their joint exploration and development of the field. This agreement removes the last obstacle to the construction of the Trans-Caspian Gas Pipeline (TCGP). 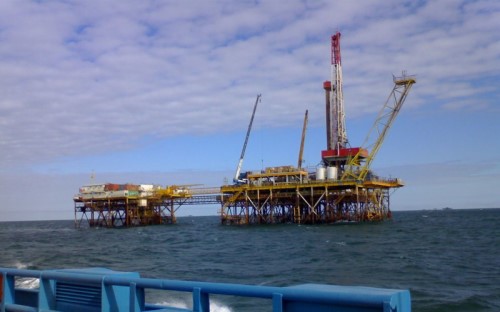 BACKGROUND: The first TCGP proposal arose in the late 1990s, as Azerbaijan was exploring its now-developed offshore Shah Deniz deposit. In the very beginning, BP actually expected to find mainly oil in Shah Deniz with gas condensate as a more minor product. It was therefore considered necessary to incorporate gas from Turkmenistan into the Baku-Tbilisi-Erzurum gas pipeline (now usually called the South Caucasus Pipeline, SCP). It was originally planned that 30 billion cubic meters per year (bcm/y) of gas would flow through two 15 bcm/y “strings” from Turkmenistan into Turkey. Turkey would have acquired 16 bcm/y for domestic consumption and the other 14 bcm/y would have been re-exported to Europe for hard currency to be remitted to Turkmenistan.

In the event, it turned out that Shah Deniz was the second largest gas-and-condensate deposit that BP had ever developed up until then. The first estimate put the total volume of surveyed reserves at between 700 billion cubic meters and 1 trillion cubic meters. In mid-February 2000, Turkmenistan’s President Saparmurat Niyazov rejected a proposal for his country and Azerbaijan to split the 30 bcm/y volume more or less equally. As talks over the TCGP were failing, in part due to Russia’s success in persuading Turkey to buy gas through the Blue Stream pipeline project under the Black Sea, BP announced plans to develop the Shah Deniz strike and pipe the gas from it to Turkey according to a timetable not very different from that for the TCGP.

The TCGP project was revived in the mid- and late 2000s, in connection with the Nabucco pipeline project. The EU had adopted the principle of “complementarity” at its May 2009 Southern Gas Corridor (SGC) summit, meaning that the Nabucco project company should work together and avoid competition with the simultaneously projected White Stream project. (This was at a time when the SGC was defined as Nabucco plus White Stream plus the Interconnector Turkey-Greece-Italy, ITGI.) However, the head of the Nabucco consortium soon made it clear that he would prefer to build a “second” Nabucco pipeline along the same route, rather than work with White Stream. In retrospect, it is clear that the Nabucco project sponsors intended for it to complement Nord Stream and South Stream, rather than to complement White Stream.

In the end, the consortium developing Azerbaijan’s offshore Shah Deniz deposit, led by BP, indicated a preference against Nabucco and for the Trans-Anatolian Natural Gas Pipeline (TANAP). The Nabucco consortium then submitted a proposal for a “Nabucco-West” variant that would have taken the gas from Turkey’s western border through into Europe. In June 2013, however, the Shah Deniz consortium announced its choice for the Trans-Adriatic Pipeline over both Nabucco-West and the ITGI, effectively ending both of these projects.

IMPLICATIONS: The second TCGP project innovated the “two entry-points to Europe” plan, according to which the first 15 bcm/y string takes Turkmenistan’s gas under the Caspian Sea into the SGC, landing in Italy. In the present (third) incarnation, the second string takes another 15 bcm/y of Turkmenistan’s gas across Azerbaijan and Georgia to the Black Sea coast, landing in Romania via the White Stream pipeline. A dozen years ago, the project foresaw a possible first landfall in Ukraine; but the technology has since then developed to the point where a single gas-compressor station on the Georgian coast can do the job.

The results of the Second Karabakh War have eliminated any possible threat by Armenia to the “Ganja Gap” corridor from Azerbaijan to Georgia, through which pipelines and other communications already pass. Moreover, the TCGP’s first string could improve Armenia’s energy security by giving it the opportunity to buy gas from Turkmenistan. A major Turkish energy company is already looking into the possibility of constructing a pipeline through southern Armenia, from Azerbaijan proper to its Nakhchivan exclave and through to Turkey itself, in order to carry gas from the TCGP’s first string on to Europe. Otherwise, the TCGP can traverse the secure and already proven Azerbaijan-Georgia corridor.

This configuration of the project has been under active development for several years. The European Commission has indicated its interest by putting it on the List of Projects of Common Interest of the Innovation and Networks Executive Agency (INEA). Thus, the new MoU between Azerbaijan and Turkmenistan in January over the mid-Caspian oil field is far from a sudden development. On August 17, 2017, the two sides signed an MoU formally agreeing, at the head-of-state level, that they would cooperate on the transit of Turkmen gas “in the European direction.” Talks leading to the new agreement on the Dostlug/Dostluk field have been under way since then. The new agreement also follows the August 2018 signing of the Convention on the Legal Status of the Caspian (“Aktau Treaty”), which guarantees that no Caspian littoral state can veto any pipeline that two other states wish to construct between themselves, such as the TCGP between Turkmenistan and Azerbaijan.

In addition, the US Government has at its fingertips a new instrumentality for direct and tangible support. This instrumentality is the “European Energy Security and Diversification Act of 2019,” which became law in December 2019, as Title XX of the “Further Consolidated Appropriations Act of 2020.” The TCGP satisfies all project eligibility and project preference criteria for U.S. Government support as identified in this Act. This provides for funding from the U.S. International Development Finance Corporation (DFC, the “modernized” Overseas Private Investment Corporation). Moreover, the Trade and Development Agency (TDA) can promote U.S. private sector participation by providing opportunities for the use of U.S. exports. The Countering Russian Influence Fund (CRIF) is authorized to support other U.S. agencies that may provide assistance under the Act itself. This Act thus gives the U.S. Government the authority and the means to offer technical development, debt and equity financing, and other instruments to realize the TCGP project.

The TCGP can satisfy the EU’s energy requirements without contravening the principles of the European Green Deal, because it can be designed to be hydrogen-ready. Along with TCGP’s complementary second string, the White Stream pipeline under the Black Sea from Georgia to Romania, it would go beyond merely enhancing the EU’s security of supply. White Stream would bring competitively priced gas from new sources to the Austrian hub at Baumgarten via the lowest-cost transportation routes, by feeding the Bulgaria-Romania-Hungary-Austria (BRUA) pipeline as well as other connectors. It would thereby enhance sustainability, increase competition, augment market integration, and facilitate the deployment of renewable energy sources at larger scales. The new realities in the South Caucasus and Caspian Sea regions provide significant potential to supply blue hydrogen to the EU.

CONCLUSIONS: All four conditions are now in place for the TCGP’s construction. First, there is a dedicated source of gas. Turkmenistan has huge gas reserves that are already developed but are “shut in,” awaiting a buyer. Its internal East-West Pipeline, running from those gas fields in the east of the country to the Caspian Sea border, was finished several years ago and is capped, awaiting connection to the TCGP. Second, the TCGP project promoter company has a viable business plan supported by the European Commission’s INEA. Third, the pipeline is economically viable and superior over the alternatives. In particular, Turkmenistan is the only available non-Russian source of natural gas (and of blue hydrogen) that has the potential to make the EU’s energy transition more efficient and less expensive, while at the same time enhancing the security of supply. Moreover, Turkmenistan is Europe’s only source for gas that is not linked to world prices while being deliverable in quantities sufficient to affect Russia’s market dominance, with production and delivery costs comparable to Russian gas (or lower), and in addition able to compete with hydrogen that Russia says it wishes to supply to the EU. The fourth condition now in place is that the TCGP project has the necessary political support as described above.

More in this category: « Russian and American Strategies for Central Asia Ignore Link to Caucasus, Fall Short Political Crisis in Georgia Takes Turn for the Worst »
back to top