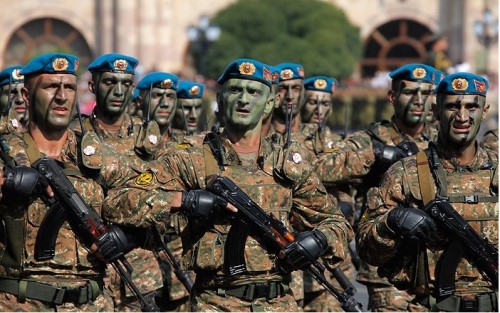 BACKGROUND: The recent flare-up at the border is one of several military confrontations between Armenia and Azerbaijan since the volatile 1994 cease-fire in Nagorno-Karabakh. However, this time the skirmishes did not take place on the Line of Contact (LoC) in Karabakh and the surrounding territories where they usually occur, but at the internationally recognized border between Armenia and Azerbaijan – in Azerbaijan’s Tovuz and Armenia’s Tavush regions. A trenched line, manned by soldiers from both sides, divides this section of the Armenian-Azerbaijani border zone. Clashes in this area have occasionally occurred since the 1992-94 war but never on a scale comparable to the July 2020 outbreak. Nevertheless, tensions have been rising steadily in this region in recent years and resulted in particularly severe skirmishes in 2014 and 2016 during the Four Day War.

According to Azerbaijan’s Ministry of Defense, clashes also occurred on the border between Azerbaijan’s Nakhchivan and Armenia. This landlocked, strategically located exclave of Azerbaijan borders Armenia to its the east and north. Its location puts Azerbaijan in striking distance of important targets on Armenia’s territory, including its capital Yerevan. In recent years, Baku has consistently upgraded military capabilities in the exclave by establishing a new Combined Army Unit, deploying new military hardware and conducting yearly exercises with Turkey. Although military clashes around Nakhchivan are not as frequent as along the Karabakh LoC, they did occur in 2014-15, during the Four Day War and in 2018.

The July fighting involved the use of heavy artillery an aerial drones as well as cyberattacks and disinformation. It resulted in 18 military and civilian casualties, including several high-ranking service members. Azerbaijan reported the loss of popular major general Polad Hashimov, a colonel and two majors. Armenia lost one major and one captain.

IMPLICATIONS: The exact course of events is difficult to ascertain, as the portion of the border where the skirmishes broke out is unmonitored and Armenia and Azerbaijan have traded accusations for the confrontation. It remains unclear which incident triggered the fighting. Armenia’s Ministry of Defence (MoD) reported that an Azerbaijani jeep tried to cross Armenia’s border in the Tavush region and was abandoned by the soldiers after a warning from the Armenian side. Shortly thereafter, Azerbaijani soldiers allegedly started to shell an Armenian outpost. By contrast, Azerbaijan’s MoD accused Armenian armed forces of attempting to seize Azerbaijani positions, using artillery in the direction of the Tovuz region. Both countries accused each other of targeting civilian settlements in the densely populated areas adjacent to the international border.

There are also several possible explanations for why the escalation occurred in the first place. Some analysts have pointed out that Armenia’s leadership may have initiated the armed confrontation at the border to boost the government’s popularity and divert public attention from the economic and health crisis that are shaking the country due to the coronavirus pandemic. Yet Azerbaijan is also experiencing economic turmoil and a public health emergency, and its leadership could benefit from the “rally-around-the-flag” effect to diffuse social discontent. Other observers assert that Azerbaijan would not have initiated an attack in this area, in close proximity of its critical energy and transport infrastructure. Another potential motive stems from the fact that this section of the Armenian-Azerbaijani border, albeit internationally recognized, remains undemarcated, which incentivizes occasional pushes aiming to seize new heights in the area. It has also been pointed out that Azerbaijan has grown frustrated with the stalemate in the Nagorno-Karabakh peace process. This was reflected in an unusually explicit interview with President Aliyev in July on Azerbaijani television, where he stated that the peace process has become “meaningless” and criticized the OSCE Minsk Group, which was set up to facilitate the peaceful resolution of the Nagorno-Karabakh conflict, for inaction.

The skirmishes inflamed public opinion in both countries and beyond and were accompanied by a propaganda war. On July 14, police dispersed a crowd in Baku after a large patriotic march in support of the “liberation of Nagorno-Karabakh” went out of hand and turned into a burst of social discontent, and a small number of participants stormed the parliament building. In Armenia, protesters rallied in front of Ukraine’s embassy in Yerevan, throwing objects at the building to protest a statement issued by Ukraine’s Ministry of Foreign Affairs supportive of Azerbaijan’s territorial integrity.

The brief confrontation also triggered interethnic clashes between Armenian and Azerbaijani diasporas in several locations worldwide, which quickly moved from the Internet to the streets and resulted in brawls in many cities such as London and Los Angeles, as well as in Moscow and other Russian cities. The verbal exchanges continued and on July 16, Baku warned that if Yerevan escalates the conflict further, Azerbaijan is capable of striking Armenia’s nuclear power plant in Metsamor. Azerbaijani officials retracted this statement soon thereafter, but it had already caused an uproar in Armenia.

The July confrontation also drew attention from international actors, mainly Russia and Turkey, who took radically different positions on the issue. Ostensibly, Russia remained neutral and offered mediation. However, reports suggest that Moscow may have provided Armenia with military support just before the border skirmishes erupted. On August 13, President Aliyev explicitly stated that Moscow sent Armenia “more than 400 tons” of military equipment weeks before the escalation. As a CSTO ally, Russia has been a frequent supplier of military equipment to Armenia and it remains unclear whether the latest arms shipment was intentional or coincidental. Nevertheless, Russia appears reluctant to provide overt support for Armenia at the expense of Azerbaijan, since it wants to maintain positive relations with Baku. Observers have also pointed out that Moscow should want to diffuse the ramifications of the Armenian-Azerbaijani conflict on its own territory, since large numbers of Azerbaijanis and Armenians reside in Russia. Moscow is likely also concerned over the possibility that Turkey may increase its presence in the Caucasus in order to support Azerbaijan.

In contrast to Moscow’s position, Ankara has openly supported Azerbaijan based on their bilateral strategic partnership, which envisages mutual support in case of necessary self-defense, including military assistance. Soon after the clashes erupted, Turkey’s President Recep Tayyip Erdoğan condemned Armenia’s attack against Azerbaijan and offered Turkey’s full support for Baku. In mid-August, Turkey dispatched a high-level military delegation to Azerbaijan headed by Minister of Defence Hulusi Akar, which was received by Azerbaijan’s president. At the end of July, Turkey also organized large-scale military exercises with Azerbaijan, which lasted for two weeks and included air and ground forces. Furthermore, in mid-August Azerbaijani media reported that Baku and Ankara were discussing the possibility of establishing a Turkish military base in Nakhchivan.

CONCLUSIONS: The July confrontation at the internationally recognized border between Armenia and Azerbaijan brought no territorial gains for either side. However, the border zone (and to a lesser degree Nakhchivan’s border with Armenia) re-emerged as another flashpoint between Baku and Yerevan. This is a worrying development since clashes outside the Karabakh area remain on the sidelines of the peace process, even though they have become more frequent and violent. Moreover, the recent violence at the border has further polarized both nations, which will make diplomatic progress over Nagorno-Karabakh even harder.

It is unlikely that either Yerevan or Baku, which are currently preoccupied with an economic and health crisis, are interested in full-scale war. However, there is still reason for concern: if an escalation between the two would spiral out of control, this could turn the South Caucasus into a ground for Turkey-Russia proxy confrontation, allowing Turkey to use its obligation to support Azerbaijan as a pretext for upgrading its military engagement with the region.

More in this category: « What does Iran and China's US$ 400 Billion Defense and Trade Deal Mean for India? Expanding Armenia - Israel Relations: Implications for Iran’s Foreign Policy in the South Caucasus »
back to top