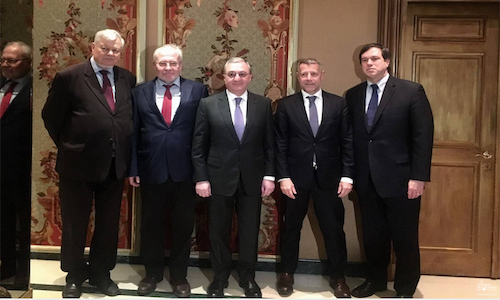 BACKGROUND: Over the last year, no substantial progress has been made towards reaching an agreement between Armenia and Azerbaijan on the Nagorno-Karabakh conflict. In 2019, five ministerial meetings and one meeting between the leaders of the two countries can largely be considered as missed opportunities. These meetings took place against the backdrop of increasing belligerence in the official rhetoric, which undermined the peace process.

Armenia’s new leadership has sought to change the format of negotiations to include representatives of the “Nagorno-Karabakh Republic,” which has been rejected both by the Azerbaijani side and by the OSCE Minsk Group Co-Chairs (Russia, France, and the U.S.). On 29 March 2019, while the Armenian and Azerbaijani leaders were meeting, Armenian Defense Minister David Tonoyan threatened that Armenia would occupy more Azerbaijani lands in the case of resumed war between the two countries. Prime Minister Nikol Pashinyan himself repeated this bellicose rhetoric in August, as he called for the unification of Karabakh and Armenia when addressing a crowd in Khankandi, (a town in Nagorno-Karabakh serving as the capital of the self-proclaimed republic and known as Stepanakert in Armenian) controversially declaring that “Karabakh is Armenia – Period.” Azerbaijan reacted with massive outrage to these statements, which undermined the efforts to revive negotiations on conflict settlement. The “Karabakh is Azerbaijan – exclamation mark!” retort by Azerbaijan’s President Ilham Aliyev at Russia’s high-level Valdai International Discussion Club, before an audience including Russian President Vladimir Putin, demonstrated that the leaders of the two conflicting states remained at loggerheads.

However, although Aliyev and Pashinyan failed to reach a tangible breakthrough in negotiations, they took necessary measures to prevent their diplomatic failure from reflecting on the line of contact. Direct leadership contacts and communication channels between security personnel and political representatives, agreed between Azerbaijan’s President and Armenia’s Prime Minister in Dushanbe in October 2018, helped minimize clashes and casualties in 2019. Statistics provided by the International Crisis Group show a significant decrease in the number of casualties last year compared to previous years. For example, while 39 military servicemen were killed in 2017, the year before Armenia’s power change in 2018, casualties dropped to 8, including one civilian, in 2019.

Moreover, agreements on the establishment of humanitarian projects and allowing support visits by relatives of detainees held in each other’s territories, as well as of journalists, have helped reduce tensions. In November, the two countries performed the first exchange of journalists since 2001. Three journalists from each side joined the initiative and met with the expert community and media representatives from the other side. Importantly, Azerbaijani journalists were also allowed to visit the Nagorno-Karabakh region, where they met the local Armenian community.

Meanwhile, in 2019 Azerbaijan also reinforced the voice of Nagorno-Karabakh’s Azerbaijani community, which resided in the region before the outbreak of war and currently amount to 80,000. The appointment of the young leader Tural Ganjaliyev, fluent in English and French, as head of the community was a step towards this end. The community has since boosted its international engagement by visiting the U.S., the EU and Turkey last year and frequently meeting with the diplomatic missions in Baku.

IMPLICATIONS: The first meeting between Armenia’s and Azerbaijan’s foreign ministers in 2020 was intended to continue discussions on the implementation of agreements and proposals discussed in 2019 and the possible next steps to prepare the populations for peace; principles and elements forming the basis of a future settlement; and the timing and agenda for advancing the settlement process.

The OSCE Minsk Group’s final statement on the meeting for the first time emphasized the principle of confidentiality in the settlement process, which triggered speculations about a possible breakthrough underway. This, along with the fact that the ministerial discussions took eleven hours in total (seven hours on January 29 and four hours on January 30) – the most intense in the recent years although not a record – caught the attention of local and international observers. According to Russia’s Kommersant Daily, “although the basic problems have not been resolved, the parties intend to continue the ‘small steps’ that began in 2019. First of all, it is about mutual trips of journalists and public figures.”

The engagement of the Minsk Group’s Co-Chairs remains extremely important to the negotiations, as well as a potential breakthrough, and proved indispensable in the course of the latest meeting as well. On January 29, during the meeting, Aliyev and his French counterpart Emmanuel Macron had a phone conversation at Macron’s initiative. Following the call, Baku declared that Aliyev once again informed Macron about Azerbaijan’s position on the conflict. Although the full content of the call was not made public, its timing demonstrated increased international engagement with the conflict, as the leaders of the Minsk Group co-chairing states are rarely involved in the process during such meetings.

The OSCE Minsk Group has made clear that it considers Yerevan’s attempts to change the negotiation format to be unacceptable. The Group’s co-chairs have generally reacted negatively to initiatives that they consider to undermine the peace process. Hence, in 2019, the Azerbaijani side welcomed Russian Foreign Minister Sergey Lavrov’s opposition to Pashinyan’s “Karabakh is Armenia” speech, which he compared to the statement “by the Prime Minister of Albania … [who] stated that Kosovo is Albania,” adding that “these statements do not help the settlement of the conflict.”

Against this background, the first public debate between the Azerbaijani President and Armenian Prime Minister, organized within the framework of the Munich Security Conference on February 15, was a surprising occurrence although its results were predicable. The two leaders reiterated their positions in the 45-minute event and could not resist also referring to their countries’ historical claims – which did not provide a favorable ground for a productive conversation. The unfortunate fact that a sniper killed an Azerbaijani soldier on the frontline only hours before the event put a shadow on the occasion and demonstrated how far the two nations are from peaceful reconciliation.

CONCLUSIONS: Despite some optimism, the foreign ministerial meeting in Geneva did not deliver any tangible results and runs the risk of being recorded only as one among many fruitless meetings occurring over the last three decades. The largely similar statements by the Foreign Ministries of the two countries following the meeting did not change the picture. They declared that the sides discussed the proposals put forward in 2019 and remained willing to prepare the two peoples for peace and humanitarian exchanges. They also stated their readiness to meet again in the near future. Despite many shortcomings, the recent developments, in particular the intensification of meetings between foreign ministers and the sharp decline in the number of clashes and casualties serve to retain a glimmer of hope that the frequently violent conflict between the two South Caucasian countries could approach a breakthrough. However, if no tangible results are achieved in 2020, an eventual repetition of the April 2016 clashes, which resulted in the loss of hundreds of soldiers, could become unavoidable.

Dr. Vasif Huseynov is a senior fellow at the Baku-based Center of Analysis of International Relations and holds a PhD from University of Göttingen (Germany). He is the author of the recently published book “Geopolitical Rivalries in the ‘Common Neighborhood’: Russia's Conflict with the West, Soft Power, and Neoclassical Realism.”

Image Source: Ministry of Foreign Affairs of the Republic of Armenia accessed on 4/6/20

More in this category: « Geopolitics Doomed Georgia's Anaklia Project, But Can Also Resurrect It Iran's COVID-19 and Pakistan's Vulnerability »
back to top