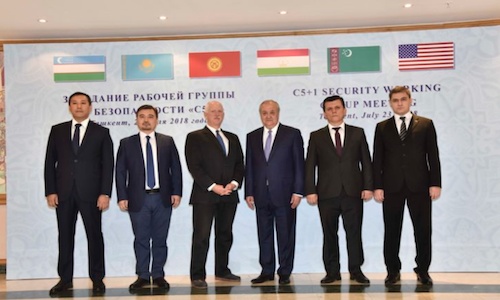 BACKGROUND: It is obvious that since the collapse of the Soviet superpower in 1991, Central Asia has been an area subjected to the geopolitical manipulations of great powers – mostly within the triangle U.S., Russia and China. While Russia’s and China’s presence in the region has frequently been considered as a “neighbors’ right”, the U.S. presence has had a dual effect: on the one hand, regional states viewed it as friendly and hoped it would translate into political and economic assistance. On the other hand, Russia and China have become increasingly concerned over the presence of their geopolitical rival in their backyard.

It is not by accident that the U.S. from the beginning promoted a regional vision, supporting the independence of these countries and their democratic development. Some U.S. experts even proposed the concept of “Central Asia as a great-power-free-zone.” In the course of U.S.-Central Asia interactions, Washington’s strategy has evolved from general principles and visions to more strongly articulated concepts. The C5+1 format, established in 2015, was a major step forward.

At the same time, C5+1 came into being in a controversial context, as international politics show signs of a return from the ad-hoc post-cold war world order to a neo-cold war type of relationship between the U.S. and Russia (see CACI Analyst 15/11/13). The latest meeting within this format took place in Tashkent where Pompeo, aside from participating in the meeting, had a talk with President Mirziyoev. Soon after Pompeo’s Central Asia tour, the “United States Strategy for Central Asia 2019-2025: Advancing Sovereignty and Economic Prosperity” was published.

On one hand, the text of the Strategy contains concrete, not abstract, messages on what constitutes the U.S. interests in the region in a number of areas: “Central Asia is a geostrategic region important to United States national security interests, regardless of the level of United States involvement in Afghanistan.” This is one of the most important messages, since it recognizes the value of the region consisting of five countries in its own right, and does not include Afghanistan as part of Central Asia as some scholars have recently been inclined to do.

Of crucial importance is the U.S. intention to support and strengthen the sovereignty and independence of the Central Asian states, individually and as a region. This item demonstrates and articulates that the U.S. recognizes and emphasizes the significance of regional unity in this part of the world. It resolutely states that the U.S. will support efforts to bridge differences that have divided the region. No other great power pays so much attention to the existence of the region per se or expresses clear-cut support of regionalism in Central Asia.

On the other hand, geopolitical intentions are hidden in the Strategy text, which for instance stresses that close relations and cooperation with all five countries will promote U.S. values and provide a counterbalance to the influence of regional neighbors. This is undoubtedly a message addressed to the permanent geopolitical rivals Russia and China.

IMPLICATIONS: The so-called triangle geopolitics emerged in this region already in the 1990s. It is presently only taking on a new shape and new dynamics. Russia is eager to consolidate the Eurasian Economic Union (EEU) created in 2015. China intends to realize the Silk Road Economic Belt (SREB) of its global Belt and Road Initiative (BRI) first advanced in 2013. The 2020 version of the new U.S. Silk Road is a response to this. Thus, the old geopolitical game now seems to take on a new specific combination of EEU, SREB and U.S. Silk Road, which actually reflects a strongly organized, subtly articulated and ambitiously scaled process of competition in and around Central Asia.

Notably, Russian and Chinese media and pundits did not leave the U.S. top official’s visit and the subsequent announcement of the U.S. Strategy without reactions. In particular, they noted that Pompeo’s Central Asian tour was preceded by a trip to Ukraine and Belarus, suggesting that the tour had a broader and more sophisticated agenda. Moreover, while in Kazakhstan, Pompeo raised the issue of Uighurs of Xinjiang, prompting top Chinese diplomats to rebuke this demarche against China. In response to Pompeo’s meeting with Mirziyoev, in turn, Russian experts “discerned” Washington’s temptation to prevent Uzbekistan from joining the EEU.

Meanwhile, having recognized and valued the regional unity of the five Central Asian states, the U.S. Strategy, unfortunately, does not specifically mention the recently revitalized Consultative meetings of the leaders of these countries as a major step towards regional integration. Two such meetings were held since 2018 – one in Astana, one in Tashkent. The third is scheduled for this year in Bishkek. However, these meetings have not so far given rise to a more institutionalized mechanism for cooperation. One of the reasons is that the leaders of these states are apprehensive of possible counter-reactions from Moscow, which would perceive this as an obstacle to its own scheme for regional integration via the EEU.

Overall, the region is facing an ambiguous trend where great powers bring policies with competing geopolitical visions, while Central Asian states seek to escape geopolitical challenges. The longer the regional states remain independent and gain broader experience in the international system, the more obvious it becomes that their only option for escaping the geopolitical trap is to concentrate on stronger institutionalization of their own regional cooperation, moving beyond the modest Consultative Meetings format.

Indeed, neither SREB nor EEU are concerned with normative issues and each is designed and promoted on the basis of salient geopolitical and utilitarian attitudes to Central Asia. The U.S. Strategy, by contrast, consistently highlights the elements of protecting human rights, supporting the rule of law, improving human capital and strengthening civil society.

CONCLUSIONS: The new U.S. strategy on Central Asia reinvigorated the perspective of international politics in the region as a geopolitical game. The five regional states are once again concerned of finding themselves as hostages in the competition of great powers with uncertain implications, recalling Thucydides old maxim “Right, as the world goes, is only in question between equals in power, while the strong do what they can and the weak suffer what they must.” Indeed, to what extent can Central Asian states exercise true independence from great powers in terms of possessing the freedom of choice and ability to escape the geopolitical trap?

Hopefully, the triangular geopolitics will not blur Central Asian regional unity. Consultative meetings will ultimately be the Litmus Test in this regard. The C5+1 meeting in Tashkent, Pompeo’s discussions with the Presidents of Kazakhstan and Uzbekistan, and the publication of the U.S. Central Asia Strategy, all taking place within several days in February, revealed once again the existing gap between the Western versus the non-Western approach to this region.

The U.S. Strategy points out the U.S. intention to consult with like-minded partners in its engagements with C5+1 countries. This is a relatively new element of the Strategy since it suggests a correlated and coherent Western approach to Central Asia, which can in turn help keep the normative agenda become more salient. After all, this normative agenda will play a decisive role in the tug of war within the geopolitical triangle.

From this perspective, instead of expressing suspicions (relevant or irrelevant) about Washington’s plot against Moscow and Beijing, Russian and Chinese media, analysts and official circles could also indicate their position as to whether they share the main ideas and goals of the U.S. Strategy on Central Asia.

More in this category: « Central Asia Nervously Awaits Withdrawal of Foreign Militaries from Afghanistan New Wave of Anti-Government Protests in Georgia »
back to top