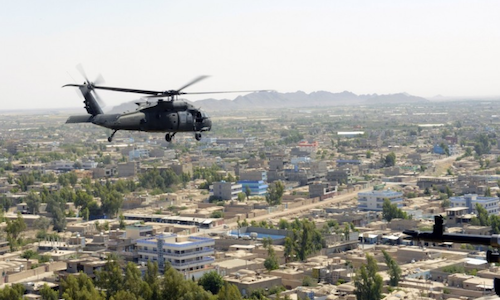 BACKGROUND: On April 12, 2019, the ICC announced its decision to turn down the request of its Chief Prosecutor, Fatou Bensouda, for permission to investigate alleged war crimes and crimes against humanity committed in Afghanistan. In her request made in November 2017, Bensouda said that “there is reasonable basis to believe that, since May 2003, members of the U.S. armed forces and the CIA have committed the war crimes of torture and cruel treatment, outrages upon personal dignity, and rape and other forms of sexual violence pursuant to a policy approved by U.S. authorities.” She also drew attention to the “widespread and systemic attack on civilians perceived as supporting the Afghan government and foreign entities” by the Taliban and other armed groups in Afghanistan,  adding that that there is “reasonable basis” to believe that the Afghan National Security Forces also committed war crimes against Afghans in their custody.

The ICC acknowledged that war crimes and crimes against humanity were indeed committed in Afghanistan. However, it pointed to difficulties the Prosecutor was facing in the investigation, since conflict actors were not co-operating with probe. Indeed, the Trump administration, which was strongly opposed to the ICC probe, revoked Bensouda’s visa to visit the U.S. in order to investigate the role of U.S. troops and officials in alleged war crimes. Additionally, “at this stage” an investigation “would not serve the interests of justice,” the ICC said.

The ICC decision relating to war crimes in Afghanistan reaffirms the argument of its critics that it targets only poor and weak states. Indeed, of the 11 countries where it has opened investigations, so far ten are in Africa. As Gambia’s Minister for Information Sheriff Bojang observed in 2016, although at least 30 Western countries “have committed heinous war crimes against independent sovereign states and their citizens since the creation of the ICC, … not a single Western war criminal has been indicted.” By caving in to U.S. pressure to call off the probe, the ICC has affirmed such allegations and further undermined its already low credibility. Additionally, the ICC decision could encourage war criminals to put themselves beyond the reach of law simply by not cooperating with the ICC’s investigators. It thus weakens the court’s future capacity to deal with war crimes.

IMPLICATIONS: The ICC decision has important consequences for Afghanistan. Some have argued that by calling off the probe, the ICC has eased the way to a negotiated settlement of the conflict in Afghanistan. Had it probed the conflict actors and put them on trial, they could simply have walked away from the talks. Ongoing negotiations with the Taliban for a settlement of the conflict would have collapsed. Now, the conflict actors can be incentivized to participate in talks through an offer of amnesty. In 2016, the Ashraf Ghani government offered Gulbuddin Hekmatyar, a notorious warlord often referred to as the butcher of Kabul, amnesty in return for entering into a peace agreement with the government. Hekmatyar renounced violence, pledged to abide by the Afghan constitution and, eventually, signed the peace agreement. He has been taken off a United Nations list designating him as a terrorist and has been granted amnesty, along with several of his fighters. A peace agreement with Hekmatyar would not have materialized had he been tried for war crimes.

However, victims of war crimes are unhappy with the ICC decision. They have suffered terrible atrocities at the hands of various conflict actors in the decades of fighting in Afghanistan yet none of those responsible for these horrific crimes, whether members of the Taliban or other armed groups, the Afghan or U.S. security forces and their intelligence officials, have so far been brought to justice by domestic courts.

The ICC held out the promise of delivering them justice. In the months following Bensouda’s request to the ICC, the Pre-Trial Chamber received 794 representations on behalf of 6,220 individuals, 1,690 families, 26 villages, one institution, and millions of victims. These people were looking to the ICC for justice, which it nevertheless failed to deliver.

Will Afghan victims of violence therefore have to do without justice so that a peace agreement can be reached? The concepts of peace and justice are often discussed as though they are mutually exclusive. They are not. It is possible for victims to get justice even as conflict actors engage in negotiations to end the violence. This would be possible if post-conflict countries would adopt restorative justice rather than retributive justice.

The western justice system on which the ICC is based pursues retributive justice, addressing the questions, who broke the laws, what laws have been broken, and what punishment do they deserve? Perpetrators of violence are identified, probed and punished. Justice here involves revenge and retribution.

Restorative justice asks the different questions, who has been hurt and what are their needs? It focuses on the victim and seeks accountability rather than punishment and revenge. Its primary aim is to heal wounds and restore relationships. Unlike retributive justice, which could trigger new cycles of violence, restorative justice leads to reconciliation. Afghanistan has a strong tradition of restorative justice with institutions like the jirga/maraca among the Pashtuns and shura among the non-Pashtuns, which have traditionally operated as dispute settlement mechanisms at village and tribe levels. Jirga members are respected and decisions are taken in consensus. Nanawatai (forgiveness/pardon) or an obligatory acceptance of a truce offer is a local ritual. And unlike formal justice systems that often label offenders and exclude them, nanawatai reintegrates them into the community. While the criminal justice system punishes, leaving the enmities as they were, the jirga resolves the enmity at its roots and adopts rules for preventing violence.

Afghanistan’s restorative justice system is not perfect, however, it enjoys legitimacy among the people. By reinvigorating restorative justice institutions, Afghan victims of violence can get justice even as efforts to settle the conflict move forward.

CONCLUSIONS: The ICC’s decision to deny the prosecutor permission to go ahead with the probe into war crimes allegations in Afghanistan has further undermined the credibility of this institution. However, this need not spell the end of the quest for justice of Afghan victims of war crimes. Restorative justice, which has a long and strong tradition in Afghanistan, can fix accountability for these crimes. It looks for ways to meet the needs of victims and reintegrate the perpetrators. The Afghan government and civil society as well as the international community should revive the local jirga system as it will help Afghanistan move towards reconciliation.

Dr. Sudha Ramachandran is an independent researcher and journalist based in India. She writes on South Asian political and security issues. Her articles have been published in Asia Times Online, The Diplomat, China Brief, etc. She can be contacted at This email address is being protected from spambots. You need JavaScript enabled to view it. .

More in this category: « Why Kazakhstan's Presidential Elections Matter Are Georgia-Azerbaijan Relations at Risk? »
back to top