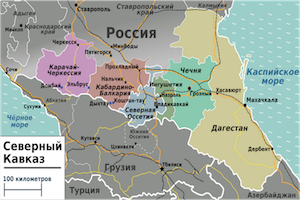 BACKGROUND: Systemic corruption, Islamist insurgency and high levels of organized crime have continuously affected the Autonomous Republic of Dagestan in Russia’s restive North Caucasus region over the past twenty years. Clan disputes, ethnic rivalries and the symbiosis of business with the mafia have been a daily reality under successive Moscow-appointed local governors. The appointment of a non-local ethnic Russian, Vasilyev, as Head of the republic in October 2017 changed the long-established tradition of power sharing among local clans. Described as Moscow’s man, Vasilyev launched a large-scale anti-corruption campaign earlier this year.

The Kremlin claims that the ongoing campaign is part of its nationwide effort to tackle corruption. However, the current activities are unprecedented for either of Russia’s regions. The wave of top-level arrests started with the detention of Makhachkala mayor Musa Musayev on January 24. Officials from the Prosecutor General’s Office, the Ministry of Interior and FSB (Federal Investigative Bureau) arrived in Dagestan on January 30, overseeing the arrest of chief architect Magomedrasul Gitinov on February 3. Three days later, authorities detained Prime Minister Abdusamad Hamidov and both of his deputies, as well as the former minister of Education and Science on charges of financial fraud and embezzlement of over 100 million rubles. They were also accused of stealing up to 386 million rubles as part of the relocation of residents from emergency housing, during which the arrested officials artificially increased the cost of accommodation in order to receive more cash from the federal budget.

The investigative group of the Prosecutor General’s Office found evidence of embezzlement of 143 million rubles through illegal sales of land and government property, and recorded numerous cases of illegal sales of government-owned real estate, unregistered by state officials. On February 7, personnel transferred from other regions of the Russian Federation replaced local road police officers. The official explanation for this move was an ongoing counter-terrorist operation across the republic, and routine staff rotation. The next day, the head of the Investigative Committee of the Russian Federation, Alexandr Bastrykin, arrived in Makhachkala.

The investigation went well beyond corruption cases and embezzlement. The investigative group soon found evidence of large-scale environmental mismanagement, discovering over 440 illegal dumping sites in the republic, and the release of over 200,000 tons of polluted water into the Caspian Sea every year. Following the arrest of the acting PM and the dissolution of government, Tatarstan’s former Minister of Economy Artyom Zdunov was appointed Prime Minister. Social media activists collected thousands of signatures opposing the appointment, while protesters organized a street demonstration in Makhachkala. The protesters demanded the appointment of a local Dagestani official as Prime Minister.

As reported by the Ministry of Interior, the clean-up was decided soon after the meeting between Vasilyev and President Putin on December 4 in Moscow. According to Kommersant, the ongoing operation is a continuation of the 2015 trials against three regional officials, including the Head of Buynaks region, found guilty of embezzling 14.6 million rubles allocated from the republican budget for the construction of a kindergarten. Authorities later convicted the detained individuals of participation in a large embezzlement scheme, which eventually led the investigation towards Hamidov and his associates.

IMPLICATIONS: Dagestani mass media assume that the motive for targeting Hamidov is his belonging to the so-called “Mekeginsky” clan, which they describe as being primarily of Dargin ethnicity. Its name originates from Mekegi village, the birthplace of Hamidov and other prominent clan members. The clan controlled three major cities in Dagestan: the capital Makhachkala, Kaspiysk and Izberbash. Musayev, the arrested former mayor of Makhachkala, is also a known member of the Mekeginsky clan. Although the powerful clan remained formally loyal to the federal center, it has syphoned millions of rubles from the federal budget and patronized most of the republic’s business elites and criminal structures. Abdulatipov (of Avar ethnicity) relied on the Mekeginsky clan to balance the two major ethnic groups in the republic: Avars and Dargins.

Above all, suspicions exist that Hamidov has funded the terrorist organization known the Islamic State in Syria and Iraq (ISIS). His nephew Murtuza Hamidov travelled to Iraq in 2016 to join ISIS. Murtuza later changed his mind and asked his uncle to pay ISIS approximately US$ 3 million in order to return to Dagestan. Upon his return, Murtuza was employed by the federal Ministry on North Caucasus Affairs. The former Head of Dagestan, who resigned from his position in October 2017, criticized the recent arrests in the republic, terming them a show off on the eve of the presidential elections.

Three months after Vasilyev’s appointment, the reshuffles continue. On April 2, six deputy ministers were relieved of their responsibilities following the newly adopted decree on decreasing the number of high-ranking positions in the administration. In late March, Vasilyev shifted his tactic of hiring professionals from outside the republic and appointed three well-known experienced local politicians to head the ministries of Production (Sayhidpasha Umakhanov), Transportation and Energy (Shirukhan Gadjimuradov), and Construction (Malik Bagliyev). However, analysts have criticized these appointments, citing the newly appointed ministers’ lack of experience in the work of their respective ministries. Moreover, all three local ministers have less than impeccable reputations and are familiar to Dagestanis as political “dinosaurs.”

Vasilyev’s tactics – initially welcomed by the Dagestani public – are becoming increasingly unpopular. As reported by Dagestan’s branch of Echo Moskvy, Vasilyev’s efforts to appoint outsiders to high-ranking positions has resulted in a deep-seated indignation among Dagestan’s elites, who underscore that solving the republic’s various problems is only possible in collaboration with clans and community leaders. Local observers based at the Dignity political discussion club also noted that the local officials Vasilyev has dismissed only occasionally took part in corrupt practices, whereas many officials with a long history of bribery remain on their jobs. Vasilyev’s unwillingness to consult and cooperate with community leaders, elders, mullahs and imams has exacerbated the discontent with the new government. While no prominent community leader has yet spoken out against the Head of the republic, many express their indignation in the local press or social media.

CONCLUSION: Among the North Caucasian republics, Dagestan has been the most difficult for Moscow to control. Not only the flourishing Islamist insurgency – with links to top Dagestani officials – but also high levels of organized crime, rampant embezzlement of federal funds and limited accountability to the Kremlin have been highly discomforting for Moscow. Although the Kremlin has obviously long been aware of the activities of Mekeginsky clan, it scheduled the purge to coincide with the start of the electoral campaign for the March 18 presidential elections. The expectation was that a successful anti-corruption crusade in the most volatile part of the Russian Federation would boost support for the incumbent president in the elections. Prior to the events in Dagestan, Putin could boast few achievements on the anti-corruption front, which opposition politician Alexey Navalny has highlighted as a key component of his campaign strategy.

In the March presidential elections, 90.7 percent of the votes cast in Dagestan supported President Putin – one of the highest results in the North Caucasus – suggesting that the Kremlin’s strategy has been effective. The weakness of the Russian economy, a slow recovery from the 2015-16 drop in oil prices, and ongoing Western sanctions no longer allow Moscow to turn a blind eye on the unruly Dagestani clans. While the Kremlin has no other options but to continue pumping federal subsidies into the North Caucasian republics, it seeks loyalty and accountability in return for the funding. Since all currently existing Dagestani clans are to various degrees associated with organized crime, corruption and militant Islam, Moscow has few options but to bring in officials from outside the region. Dismantling the clan system has long been an insurmountable challenge for Moscow. Its success will determine the effectiveness of Moscow’s rule over the largest and potentially most unstable republic of the North Caucasus.

Image source: By: By Peter Fitzgerald via Wikimedia Commons, accessed on 5.14. 2018

More in this category: « Azerbaijan's New Cabinet Composition Indicates Pro-reform Agenda What Will Brexit Mean for Georgia? »
back to top