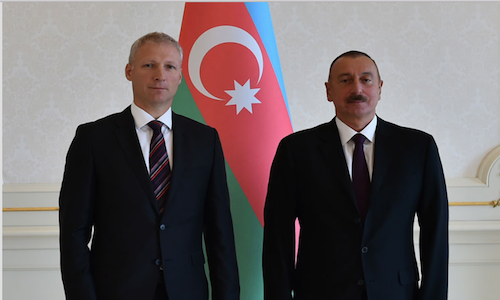 BACKGROUND: Dynamic and radical changes in the eastern neighborhood have necessitated the establishment of a new legal framework to ensure deeper strategic partnership between the EU and Azerbaijan. Instead of signing the Association Agreement (AA), Azerbaijan presented the draft “Strategic Partnership Agreement” (SPA) to the European Commission in 2015, which Azerbaijan’s President Ilham Aliyev called a “new chapter” in the relations. However, the negotiations were postponed after the European Parliament’s (EP) critical resolution in September 2015, which questioned Azerbaijan’s democratic credentials. Azerbaijan subsequently withdrew from the EU-Azerbaijan parliamentary cooperation committee and renamed the state commission on “EU Integration” to “Partnership with the EU.” The parliamentary and diplomatic ties were later revived through constructive dialogue.

The Nagorno-Karabakh (NK) conflict is a priority topic of the SPA. Baku is frustrated with the gradual weakening of the EP’s previously clear stance on Azerbaijan's territorial integrity and on the withdrawal of Armenian military forces from Azerbaijan’s occupied territories. Moreover, the EU’s official approach on the NK conflict has been downgraded to traditional rhetoric on supporting the “endeavors” of the OSCE Minsk Group’s co-chairs. The EU’s diplomatic indifference became more explicit when Brussels simultaneously supported Azerbaijan’s territorial integrity and endorsed the “right to self-determination” of Armenians residing in NK. The Azerbaijani government considers the EU to apply double standards in its introduction of sanctions against Russia because of its actions in Ukraine, but not against Armenia for its occupation of Azerbaijani territories.

IMPLICATIONS: Although Azerbaijan has continually strived to form advanced cooperation with the EU, it refrained from signing the AA in 2013 due to its aversion toward the EU’s past stance on the imposition of a unilateral normative agenda in the EaP. In this context, the AA failed to consider Azerbaijan’s strategic, political and economic interests.

However, Baku now demonstrates an unprecedented level of political determination to complete negotiations on the new agreement. President Aliyev emphasized that Azerbaijan wants “a speedy conclusion of negotiations” without any delays and prefers a “more individual approach.” The SPA will be a comprehensive agreement, covering a range of cooperation areas. The agreement is underpinned by the two political principles of “differentiation” (highlighted in the ENP’s review) and “principled pragmatism” (presented in the EU’s Global Strategy). The latter implies that the EU will tailor its approach toward partners, acknowledging their different political paths and avoiding conventional “one-size-fits-all” principles.

The SPA aims to create a competitive and diversified economy in post-oil Azerbaijan, which also requires proper market management, multilateral trade ties less dependent on resources, and reformed institutions. Although separate elements of the document have already been agreed upon, there is still no final agreement on any specific chapters. Yet the failure to sign the agreement during the summit came as no surprise as the Azerbaijani government focuses more on the document’s quality than the timing. Negotiations are expected to be completed by the end of 2018. According to Azerbaijan’s EU Ambassador Fuad Isgandarov, “Work will be completed when [the document] fully meets Azerbaijan’s interests.” With the new agreement, Azerbaijan aims to establish strategic relations with the EU. Baku’s golden principle is “not to rush” in signing any document, since the content is more significant than political visibility. Azerbaijan wants all bilateral interaction and strategic engagement concerning the political dialogue and regional security to be conducted on solid foundations and pragmatic terms guided by the principles of the EU’s Global Strategy.

Azerbaijan, which is subjected to an externally imposed military occupation, considers its sovereignty, territorial integrity and internationally recognized borders to be issues that cannot be the subject of compromise. Whereas the EU considers the status quo in the Nagorno-Karabakh conflict to be unsustainable, Brussels prefers an impartial approach that balances the demands of Azerbaijan (territorial integrity) and Armenia (self-determination). The challenge lays in finding appropriate terminology for the conflict in the SPA framework. If the EU will formulate its new agreement with Azerbaijan based on the approach to the conflict taken in its new agreement with Armenia, then effectiveness of the SPA remains a key question.

The signing of the “Common Aviation Area Agreement” will further increase the weight of the SPA. The former was not initialed during the EaP Summit despite expectations, though with a few exceptions, its main principles were basically agreed upon. Moreover, the newly inaugurated Baku-Tbilisi-Kars railway together with the Baku International Sea Trade Port and their interconnection with the North-South Transport Corridor, (all three are included in the external dimension of the TEN-T) will offer great potential of turning Azerbaijan into a new transport corridor and logistics center for North-South and East-West cargo transportation. Although the EU endorsed the BTK railway for its contribution to transport interconnections, the project received no financial or political backing from the Union in the past.

Energy cooperation, notably in the framework of the SGC, remains the cornerstone of the strategic partnership. The SGC is an exceptional example of comprehensive project management implemented in Azerbaijan (strategic partner), Georgia (associated partner), Turkey and Albania (candidate countries), Greece and Italy (member states). The project’s various segments are almost completed. 96 percent of Shah Deniz II is finished, 82 percent of TANAP, 53 percent of TAP and 95 percent of SCPx. The timely implementation of the SGC and its extension to Central Asian countries is important for Europe; although problems remain in Italy’s Puglia region concerning the construction of TAP’s final leg. The SGC is not only about energy supply security, but also about diversification of routes bringing new sources of gas, which will eventually change the EU’s energy map.

Prior to the summit, media attacks on Azerbaijan, protests against the SGC from environmental/human-rights NGOs, and the EP’s two resolutions slamming Azerbaijan for alleged “corruption” and “human-rights crackdown,” threatened to derail Azerbaijan’s warming dialogue with the EU after a year-long impasse. These actions were negatively perceived by the Azerbaijani government, which considers them as part of a political provocation by certain anti-Azerbaijani circles and other third parties in order to sabotage the perspective of Azerbaijan-EU relations.

CONCLUSIONS: The scope of Azerbaijan’s agreement with the EU will unlikely be narrowed down to conflict, energy or values. It will be different from the agreement with Armenia and conditioned by Azerbaijan’s non-affiliation with the Eurasian Economic Union, geopolitical location and independent foreign policy. Although the SPA is considered to be tailored more closely in accordance with Azerbaijan’s interests, it will be a substantive document containing equal strategic perspectives. The EU understands that without reconciliation and consideration of Azerbaijan’s position, the Union cannot shape a “convergence of interests” regarding the changing regional security environment or change the political balance in its favor.

Baku acknowledges that the SPA will enable it to embark on a more comprehensive reform policy and contribute to its economic resilience in the light of volatile oil prices. The extent of the partnership depends on how far the Azerbaijani government desires to go beyond the existing framework and how the EU will map out its communication diplomacy with official Baku on sensitive issues. The strained relations arose from a lack of strategic insight and two-way communication on delicate affairs. While inter-parliamentary deliberations are quite confrontational, bilateral diplomatic communication is conducted with “silent diplomacy”, which helps to solve many problems.

The EU’s attractiveness as a partner, in terms of its ability to address Baku’s concerns, is linked to whether the EU’s external interests and strategic priorities will prevail in its structural foreign policy towards Azerbaijan. The EU’s conventional approach, which is based on conditionality and values rather than differentiation and pragmatism, prevented it from forming productive relations with Azerbaijan. Differentiation and pragmatism is a much better response to this confusion, which also grant more flexibility to the partner country in many contexts. Therefore, the EU’s future neighborhood policy towards Azerbaijan should be more coherently conditioned by the country’s geographical circumstances, foreign policy reservations and priorities.

More in this category: « Is there an Agreement on Caspian Sea Delimitation? Iran's Chabahar Port Empowers India-Afghanistan Trade at Pakistan's Expense »
back to top